One of the things about Garmin that continues to impress is how it’s maintained its entrepreneurial edge despite being the colossus occupying most of the avionics space these days.

Apple’s iPad has challenged Garmin in the portable world, and the company was slow to respond. Now, respond it has, with a strong iPad app of its own and a portable ADS-B receiver for both traffic and weather. However, the GDL 39 receiver has hard competition in this arena. 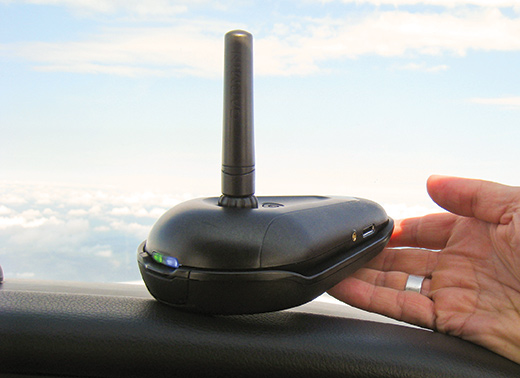 Garmin’s GDL 39 is big—especially with the battery. It connects only to the Garmin Pilot on the iPad, but can also bring ADS-B weather and traffic to Garmin GPS portables.

The GDL 39 is robust in more ways than one. It’s a solid performer, starting up fast and picking up ADS-B ground stations as soon as, or sooner than, any of the other systems we tried. As you’d imagine from a Garmin product, the GPS is built in.

Reception was flawless on our test trip from Portland, Maine, to Oshkosh, Wisconsin, paired to both a Garmin 796 aera and an iPad. While we didn’t test it, the GDL 39 can pair with two devices via Bluetooth and one via a cable all at once. The aera currently requires the cable, but the 796 has Bluetooth built in and will connect wirelessly in the future.

The GDL 39 is also big, about the size of a sardine can, and the optional battery almost doubles that size. This is noticeably larger than the popular Stratus and could be a shipping box for a pair of Sagetech or Dual ADS-B receivers. The GDL 39 is $799, but that’s without the battery, which is a $100 feature.

ADS-B weather is well integrated into the Garmin Pilot iPad app. The app downloads weather via the Internet before your flight, and, when paired with the GDL 39, ADS-B weather replaces the downloaded data as it comes in. You’ll find METARs, TAFs and NOTAMs in the same place as the Internet-derived stuff, with a timestamp and a source so you know what came from where. The aera works similarly, except the free ADS-B stuff replaces what you’d get via XM.

It should be pointed out that what a GDL 39 will do varies with the application. The iPad app will do full weather and traffic with trend vectors. The aeras, G3X and GPSMAP 696 will do weather and traffic. The GPSMAP 496/396 will do traffic, but you’ll still need to get your weather via XM. Only the 796 and iPad can get away without a cable connection.

It has also been mentioned before that ADS-B weather has limitations compared to XM. The biggest is that you usually can’t receive it until you’re airborne, and for mountainous regions, that might require some serious altitude. There are fewer weather products, though all the critical ones are there. Garmin’s Pilot app has an additional limitation compared to ForeFlight, WingX and several other apps: It can’t simultaneously display NEXRAD and other weather data such as METARs. You must choose one or the other. 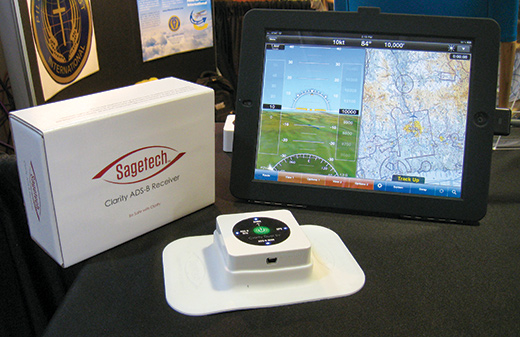 The “big things in small packages” award goes to Sagetech’s Clarity. It’s the smallest, but offers optional dual-band traffic and a backup AHRS in addition to weather.

The prospect of free traffic data sounds terrific, but the reality will be a disappointment for most pilots today. ADS-B weather is simple: It’s broadcast by the FAA from ground stations on a frequency of 978 MHz with complete data for airports and weather several hundred miles around the sending station. There’s also a low-res NEXRAD image for the whole country.

Traffic is different. First, there are two frequencies, 978 MHz and 1090 MHz. The GDL 39 listens on both. Aircraft with an ADS-B Out transponder broadcast on one of these frequencies. So if there’s one of these nearby your position, the GDL 39 will see it and paint the target on your screen. In fact, it will paint it complete with an N-number, relative altitude and trend vector.

FAA ground stations also listen for these ADS-B aircraft. If they detect one, they build a custom information packet with data on all traffic in the airspace immediately around that aircraft. This includes both ADS-B-equipped traffic and aircraft with regular transponders. That data is broadcast directionally to the ADS-B Out aircraft it’s intended for. Your GDL 39 will hear these broadcasts (if it’s in range) and paint a blob of traffic on the map centered on that other ADS-B aircraft.

The result is that—if you don’t have your own ADS-B Out transponder—you see seemingly random blobs of traffic, sometimes hundreds of miles away, but won’t see non-ADS-B-equipped traffic, even if it’s at your 12 o’clock and 2 miles (unless you, you know, look outside).

This kind of solution is of limited usefulness and could even foster a false sense of security. If you have an ADS-B Out transponder, it’s a completely different story, because the FAA ground station will send you a traffic-data blob centered on your aircraft, which could be a good way to display traffic once you have your own ADS-B Out transponder. Just for the record: A GDL 39 does not count as ADS-B compliance. 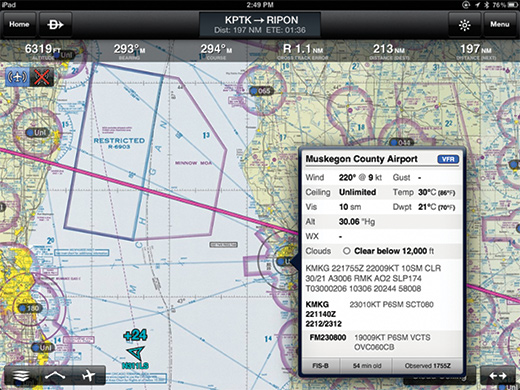 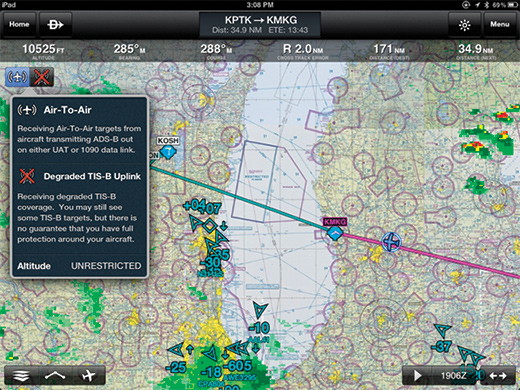 Garmin is honest about the fact that without an ADS-B Out transponder, the ADS-B traffic picture around your aircraft may be incomplete. ADS-B weather is also more limited than satellite weather.

Garmin’s GDL 39 became public around Oshkosh. At the same show, a company that had long specialized in avionics for drone aircraft appeared with four tiny ADS-B receivers that do everything the GDL 39 does and more.

Sagetech’s Clarity series stands shoulder high to a stack of crackers and comes with weather, single- or dual-frequency traffic and an AHRS (digital gyros). The AHRS combined with the internal GPS lets the Clarity offer a synthetic vision to serve as emergency flight instrumentation or just great situational awareness in the clouds. We didn’t fly the Clarity with synthetic vision, but the response and display was super-smooth when we played with it at Oshkosh.

Sagetech also touts its “data burst” feature, which will continue to download and buffer data even if the iPad sleeps, streaming it all at once when the iPad wakes so there’s no wait to get fresh data.

The price is good as well. The closest equivalent to the Garmin GDL 39 would be the Clarity Dual (both traffic frequencies) without the AHRS, which is $877, but the battery is standard.

Clarity has no visible antennas, and it remains to be seen how well it receives in flight. And it’s worth noting that internal antennas are both a blessing and a curse. These devices can get quite hot sitting on the glareshield and can shut down if they overheat, so kudos to Sagetech for making its box a reflective white rather than the omnipresent black. Stowing your receiver under a seat with a remote antenna system for ADS-B and GPS reception can be a plus. Sagetech isn’t the only newcomer to a crowded field. Dual has its compact XGPS170 coming out. FreeFlight systems also has a remote box that gets installed in the aircraft as part of a permanent ADS-B solution that outputs to the iPad for a display on the cheap. Whether the market can sustain this many options is an open question, and this isn’t even the end of them. 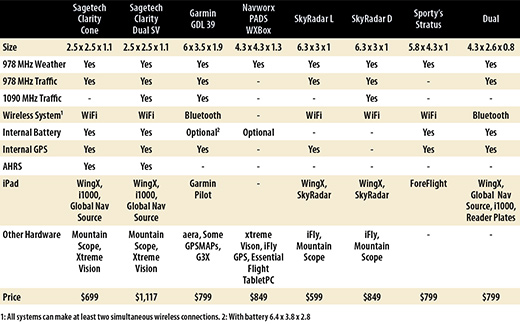 If you’re trying to select one, the decision may rest on software you want to use for display. Garmin’s GDL 39 only works with Garmin portables, the G3X panel for Experimental aircraft and Garmin’s Pilot app. Pilot plays on both iOS and Android, and the GDL will connect with Android devices.

The most popular cockpit app is ForeFlight, but right now it only supports Stratus—not surprising as ForeFlight is part of the group that developed and produces Stratus. Stratus does not do traffic, but until you have an ADS-B Out transponder, this isn’t a real liability. Several of these devices work with WingX, so if WingX is your tool of choice, you have options.

There’s no question these devices will be part of our cockpits for the foreseeable future, and we have no reservations about the GDL 39 if you want weather for your Garmin products and have a place to put it.

Mel Asberry - December 15, 2009
0
Can a powered parachute be classified as Experimental/Exhibition if it missed the ELSA deadline?

Quickbuild: Behind the Scenes