Longtime readers may recall that before scribbling in aviation magazines I scribbled in automotive magazines. That seems like someone else’s life a long time ago, but occasionally the memories surface.

Recently I recalled the big automotive gatherings I used to attend, camera and notepad in hand. These were most typically Ford or, especially, Ford Mustang events in my case. As you’d guess, the median age tended toward youth, and as you might also divine, they could be large. Large as in 500 cars wasn’t worth attending for a national magazine—and there were sometimes as many as four titles dedicated to just Mustangs (and the odd non-Mustang performance Ford) in the earlier days. No, it took something like 750 cars to feel like something was happening, and as the Mustang went from strength to strength, that number climbed into the thousands. The bigger shows easily saw 1500 cars; the largest nibbled at 3000 bits of speed and chrome, and energy was always in the air. It might have been pumped up by marketing dollars, but to the happy youth attending there was always the latest model to inspect and aspire to, or spanking new aftermarket parts being used and owners with opinions on those parts. After a decade, though, my main memory is sweating and burning under a hot sun while hiking through legions of the mass-produced parked on humid grass or sweltering asphalt. I much preferred the races because besides the heat and humidity, there were walls of ear-shattering noise, along with a light rain of rubber dust near the starting line.

Mind you, this was just Fords. The Chevy guys could congregate somewhat larger shows, while the street rod guys thought nothing of 7000 cars rumbling around the state fairgrounds.

When car magazines went away, I transferred to aviation in a, er, professional way. It was a homecoming of sorts as I had learned to fly when in high school and had managed to keep a much-loved association with flying via rented Cessnas, and then, later in the game, my Starduster Too. By then the era of big fly-ins had waned such that anything with 200 or more airplanes was a big deal and, of course, there was always that Wisconsin constitutional for a sense of the overwhelming or Reno for meaningful size with suitable thunder attached. But past those few events, aviation gatherings had the pathos of high-school cruise night with their handful of participants standing around their old airplanes looking for something to do. After automotive, the aviation hobby seemed just that—a youthful dream sidestepped by an accessible path to cars, but once returned to found quiet to the point of morbidity.

That was hardly enough to not take up my original passion and for the first time get a smile by pointing the nose of my own craft over the horizon and simply keep going. Dodging around the local area had been enough when I could barely find time to get to the airport, but when my life became something other than a stream of deadlines, the first thing I did was head off to a Starduster open house.

It was a shock. Conditioned to overwhelming visual and often aural input, that little fly-in was beyond sleepy. Turned out I had arrived when 90% of attendees (that would be about 10 airplanes worth) were off on a houseboat excursion, so I had a quiet time wandering around the tied-down biplanes inspecting details. As I was quick to learn, by then the crowds, such as they might be, were at an RV beer bash or ice cream social.

It took a few events, but eventually my sense of a gathering recalibrated to something that didn’t take four hours just to jog through. In fact, it didn’t take long to realize that no matter how large an event is, it’s really just a gathering of small groups. Organizers know this; look how AirVenture is laid out to both gather and at the same time segregate the antique, aerobatic, warbird, ultralight and, oh yeah, the homebuilts and so on. Within those silos are squads of friends or somehow associated small groups of people sharing the moment and often not wandering too far from their home fire.

This last point is important. Most people prefer the predictable; they like what they like and probably curtailed their experimental phase somewhere between high school and that night they barely outran the cops. Now settled in for the long haul, they might watch from a respectful distance but are no longer interested in getting any on them. And so the warbirds are parked in neat rows by the flagpole while the flying lawn furniture crowd is given their own pasture, etc. There is absolutely no point in forcing such groups together because the groups really don’t have that much in common and you’d end up with something like a glycol and oil sundae.

While the excitement and serendipitous possibilities of large events are undeniable, tiny gatherings are the core of the fly-in experience. They’re also far easier to plan and execute, to the point where you and a couple of friends can actually put one on. And don’t worry about the size—if all you have is a small group, that’s all you need. It just takes one brave soul to propose the idea, set the date and place, and get a couple of confederates to help with what logistics might arise, such as snagging a rental car, identifying a nearby pancake breakfast or what have you. Kept small and with a passable email list or forum to pass the word, it really isn’t that hard to do.

Furthermore, to a great extent it doesn’t matter how large a fly-in is because so much of the fun is getting there and back. Leafing through my logbook, it’s getting tough to remember one local flight from the next as they are often the same hour flown multiple times, but each trip out of the local area to a fly-in has its memorable moments, most of them pleasant.

If nothing else, I can say I’ve learned a lot simply by going through the effort to trot a few hundred miles to a gathering. Being out West, almost any trip involves terrain that looks different from that around the home drome. There are mountains, deserts and even flat farmland if California’s Central Valley is involved. Each invokes its own weather, which always adds a little flavor to the proceedings. And by weather I don’t mean internally illuminated towering cumulus, but rather the more optimally challenging (not too hard, not too easy) things such as haze in the Central Valley, broken scud along the Sierra Nevada foothills, plenty of wind also around some parts of the mountains, desert heat and so on. Each has helped round out my piloting experience and given me plenty of modifications to think about regarding my airplane.

It’s amazing how many of us haven’t traveled far in our Experimentals, and with all the glass navigators about, it’s really too easy anymore. What better excuse to extend the magenta line than to meet up with friends or about to be friends? Maybe my old “finger on the map” legacy is showing, but watching the world unwind out the windows while seeing how the railroad tracks bend around the lake just like on the map is still a simple pleasure to me.

And if you’re living truly large, perhaps you can round up a friend to fly along with you. Not formation flying, heaven forbid, just as a loose gaggle, each person free to roam and report on what they see. It makes fuel and food stops far more interesting.

Speaking of stopping, there’s little better for the amateur pilot than landing at an unfamiliar airport. Farmer Brown’s barn just isn’t there like it is at home, and be the runway long or short, narrow or wide, there’s always a little learning taking place when presenting your pride and joy to the earth at some unfamiliar spot. Helps with the ole stick and rudder skills.

And so I invite anyone remotely interested to break the routine and make the show at some fly-in within logical reach, but still a reach. You don’t even have to stay long to be part of the action; just showing up and saying hi gives you the experience and helps make the event that much more interesting.

The main thing is to give it a try. 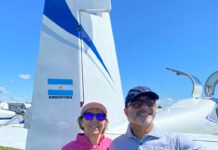 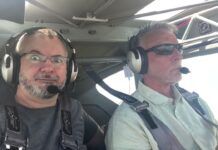 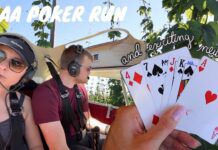 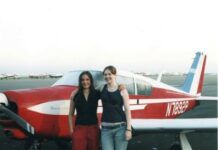