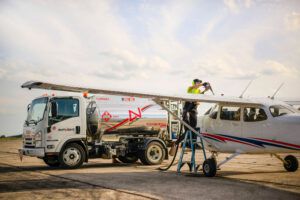 It’s been a week since the FAA finally signed a significantly broadened STC allowing the use of GAMI’s G100UL unleaded avgas in virtually every spark-ignition engine found on an airplane. The FAA, after months of foot-dragging, brought representatives to GAMI’s Ada, Oklahoma, headquarters where, one assumes, it had the last lingering questions answered. Lirio Liu, the FAA AIR-1 boss, told GAMI during AirVenture this year that the meetings would take place and they did. A couple of weeks after, the Wichita Aircraft Certification Office (ACO) saw the paperwork it has completed months ago finally signed by FAA HQ and the STC delivered to GAMI.

Now the questions turn from “Why is the FAA being so recalcitrant?” to “What’s next?” And, “When can I get G100UL at my airport?” The short answer is: Not very soon. GAMI and distribution partner AVfuel now have the task of setting up manufacturing the distribution. In one of the videos below, GAMI’s George Braly says the company has been approached by two major refiners to get more details on G100UL. Moreover, GAMI has tabbed the California Aeronautical University in Bakersfield, California, as its launch customer. The school will run G100UL and document more real-world experience with the fuel. Along similar lines, Swift says that the University of North Dakota will switch exclusively to its 94-octane 94UL fuel (its training aircraft can use the lower-octane fuel) as a test to see how engines fare without lead in the fuel. (Spoiler alert: They’ll probably be a lot happier.)

Veteran journalist Paul Bertorelli, who has been following the process to replace leaded fuel in aviation since before the unproductive PAFI initiative, has completed interviews around this subject, including with GAMI’s George Braly and Tim Roehl, highly experienced fuels expert Paul Millner and AOPA president Mark Baker. There’s a ton of good information in these videos. Kudos to Bertorelli for his clear-eyed view on the subject from our sister site, AVweb.

Bret Davenport - May 18, 2008
0
If you always wanted a custom exhaust for your homebuilt but were too afraid to ask, consider this alternative where you build the model and then send it in to the shop for professional fabrication. Author Bret Davenport found the Aircraft Exhaust four-into-one collector system for his Pitts S-1S more than satisfactory.

Paul Dye - August 13, 2021
1
I am often asked what it takes to fly many different airplanes, especially when...

The Most Reliable Engine