Whenever I encounter a pilot for the first time, the discussion starts out with flying but then might progress to amateur radio. A good many of these folks, especially the homebuilders, are amateur radio (ham) operators. Most are technically inclined and, early on, satisfied this propensity with a ham radio license.

Amateur "packet" radio began in 1980. Packets are short transmitted bursts of digital data. A short time later and to expand on a good idea, Bob Bruninga, WB4APR, developed the Automatic Packet Reporting System or APRS (www.aprs.org). Some now call this the Automatic Position Reporting System. The APRS can transmit (on a ham frequency) periodic real-time data such as weather conditions, text alerts or even GPS coordinates. What! GPS coordinates? You bet, and not only coordinates, but also altitude, heading, speed and time. Neat! 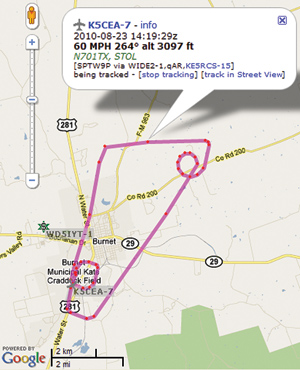 As with all ham radio activities, volunteers provide any and all facilities including fixed-based stations. But it gets better. The GPS packet data is transmitted on the VHF band and is received by a ham APRS station, which may either relay the packet or send it directly to the Internet for display on any computer in the world (http://aprs.fi). The specific VHF frequencies are standardized almost by continent (144.39 MHz for U.S. and Canada). When flying or driving in the U.S., tracking is almost a sure thing, especially so for flying.

This magazine first reported on APRS in aircraft back in the August 2008 issue ("Found From Space," Page 43), but since that time the available hardware has evolved. I’ll get into that in a minute, but first let me show you the benefits of airborne APRS.

Figure 1 shows my takeoff in N701TX from KBMQ, exiting the pattern and flying to the northeast. Prior to turning west, I executed a standard rate turn. As I was holding a constant rate of turn (a good demonstration of wind effects), the westerly wind elongated the circle to the east. I turned west, then south, entered the traffic pattern upwind, turned crosswind at midfield, flew downwind, base, final and landed back at KBMQ. The gray airplane symbol just off the runway is the last data point. The path shown is the connection of the received data points, based on time. 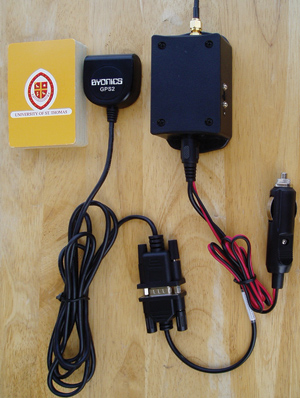 My APRS is set up to transmit every 90 seconds or when there is a ground track heading change of 30. The data burst is about 0.5 seconds at 10 watts. Because my unit does not listen for other transmissions but transmits in the blind, some packet collisions occur and are not received by the ground. The turning feature and a gap in data can be seen in Figure 1. By clicking on a data point, the information in the packet is displayed. By looking at points with different headings, you can get a sense of the wind speed and direction from the displayed GPS ground speed. By going to www.aprs.fi and entering my call sign (K5CEA-7) and then searching for tracks on a specific date (2010-08-Mon 23), you can view the packet data for each point in Figure 1.

My APRS unit is the new Micro-Trak RTG (Ready to Go) by Byonics (www.byonics.com/microtrak). It is powered externally with 12 volts, is about the size of a deck of cards, has a small separate GPS receiver and 15.5 inch antenna cable. This unit includes the transmitter, packet/data converter and power supplies into one convenient box. Along with the GPS data, the RTG packet may contain comments such as the tail number, but it must contain the ham license call sign. Two configuration sets are available and can be modified using a home computer. I have both airplane and car data sets in my RTG. Other APRS units can even communicate with each other via text messages using a keyboard and text display. However, to keep it small, light and simple, I chose the RTG (about $200).

N701TX’s RTG and GPS receiver are Velcro-mounted in the baggage area (the GPS has a clear view of the sky). It is autonomous; there is a 12-volt outlet nearby that powers the RTG when the aircraft master is on. 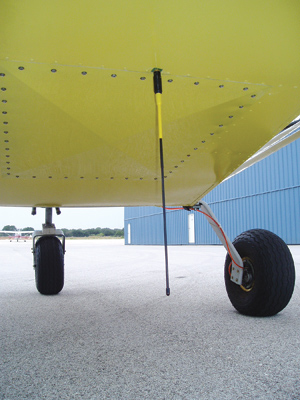 As with most ham activities, there is enjoyment to be had from employing technology as one goes about one’s daily activities. By reviewing the APRS data, you can evaluate the accuracy of instrument approaches, holding patterns, and you can gather overall flight performance data. Additionally, the folks who are at home can track your progress for both local and long cross-country flights. In a forced landing situation or worse, the aircraft’s location can be readily pinpointed.

All that is needed to get started is a Technician class amateur radio license (no Morse code; in fact, Morse code is no longer required for any level of ham license). Check out the specifics at the Amateur Radio Relay League site (www.arrl.org/getting-your-technician-license).

This is really a cool way to have fun, improve your flying skills, stay in touch and add to the safety of flight.