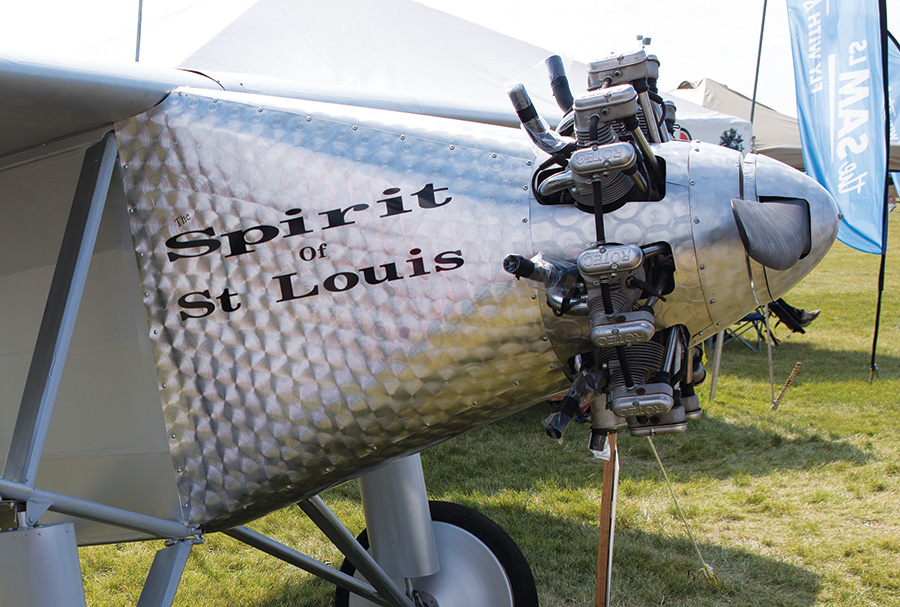 Next to the Wright brothers’ flyer, probably the most iconic airplane of all time is the Spirit of St. Louis. As a high-wing monoplane, it’s not entirely unique, but it is instantaneously recognizable by the distinctive pattern of overlapping circles that adorn the cowl and forward tank fairings.

One legend has it the pattern was put on by Lindbergh to hide the dents and scratches left over from hasty sheet metal work. The part about Lindbergh doing the work is probably not true. Photos of M-1 and M-2 Ryan aircraft, which predated the Spirit, show them with the same patterning. It likely was used to mask scratches, minor dings, or other small imperfections. Like any commercial business, Ryan would have been keen on anything that can be applied quickly, mask flaws, and look good (or at least interesting). In the case of the Spirit of St. Louis, time was a huge factor. They had to scratch-build and deliver the plane in just 60 days. Spending a week on the English wheel to spruce up fairing panels was not an option. This is not to say the Spirit was cobbled together. Far from it. But it’s not a stretch to say it was a little rough around the edges.

In the course of my research on how the pattern might have been applied to the Spirit of St. Louis, I found nothing specific and few suggestions. Robert Baslee of Airdrome Aeroplanes of Holden, Missouri, for example, used a 3-inch diameter Scotch-Brite pad in a drill press to pattern panels for his Spirit of St. Louis replica. Of course, they didn’t have Scotch-Brite back in the day. Baslee thought the Ryan Company might have used a wire brush on the original.

On top of that, there seems to be no consensus about what it’s called. Some suggested it’s the patterning or texturing from a Rose engine lathe, which is a type of machine used to generate geometric patterns. Others called the process “spotting” or “jeweling” (see John Norman’s definitive reproduction of the Spirit of St. Louis in KITPLANES, November 2015). The most accurate description, to me anyway, is the French word “perlage,” which translates into beading or pearling. According to Wikipedia, Perle (which also translates to “pearl”) is the “French expression for making a decorative pattern applied by grinding circles on a flat surface.” The process is particular to watchmaking. That sounds like a winner…so let’s call it “pearling.” 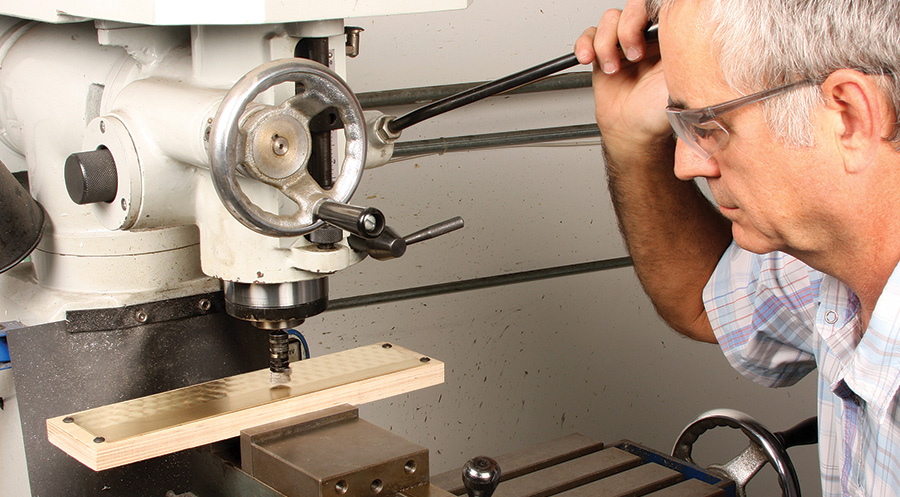 The author pearling a 3-inch x 12-inch brass sheet on the vertical mill at 3000 rpm. The brass is fixed to a plywood panel with screws at each corner.

Pearling can be done a number of ways, including using polishing compound on the end of a dowel or a rubber pad (small pearling can be done with a pencil eraser charged with compound). For larger-scale work, such as cowl panels, the best options are either a wire brush, using a type called an end brush, or non-woven Scotch-Brite abrasive pad. The goal is to make each pearl mark on the material as quick as possible, as in one or two seconds, and with the lightest possible pressure. Taking longer or using too much pressure can cause problems. 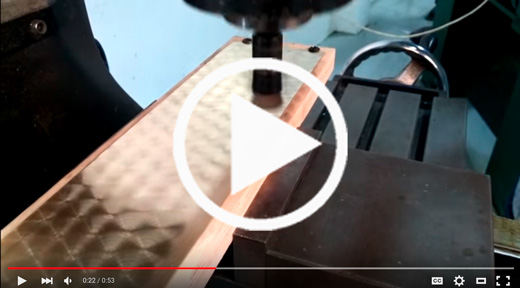 On aluminum and brass it’s very easy to gouge the material. The only wire brush I found suitable for aluminum and brass had a very fine (0.006-inch) bristle diameter. On stainless steel, the brush with 0.006-inch diameter bristles barely made a mark. But it did make heat, which is a cause of some concern because thin sheet can be prone to warping. Switching to a brush with a 0.012-inch bristle solved the problem. A good pattern can be embossed in an instant with a light touch. I also had good results on stainless using a medium-grade (maroon) Scotch-Brite disk. 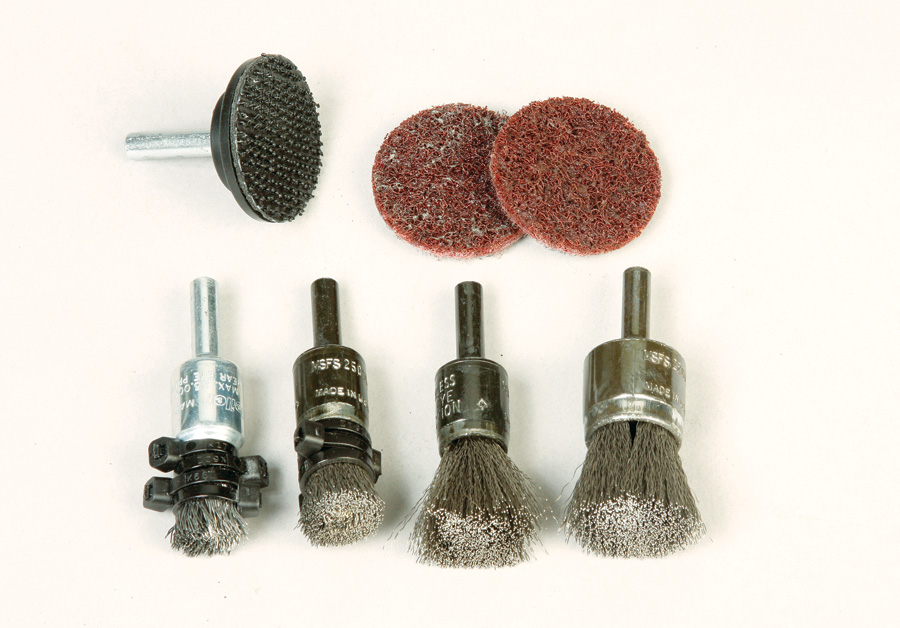 Getting good marks at dead center is problematic for any method because the bristles, or the abrasive fibers of a Scotch-Brite pad, at dead center are not moving fast enough (in terms of surface-feet-per-minute) to make much of a mark, if any. Trying to force a better center mark by holding the tool longer or adding pressure can result in gouging, stippling marks (possibly due to the small metal particles in the brush friction-welding onto the surface), or warping the material.

Note that this process does remove material, be it ever so slight. In the case of aluminum, the dust generated is quite fine, so wear a nuisance mask. 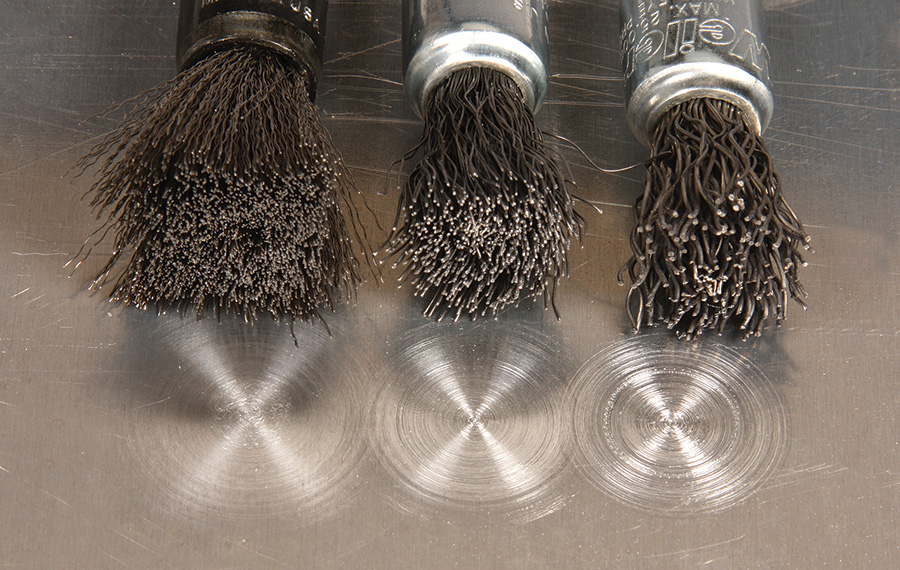 The pearling in the photo examples are between 1 inch and 11/2 inches. The amount of overlap from pearl to pearl and row to row is a matter of personal preference. For the Airdrome Aeroplanes’ Spirit of St. Louis replica, Robert Baslee maintained a side-to-side overlap of 40% and row-to-row offset of 50%. The pattern I used for my test samples was similar, except the row-to-row offset was more like 25%. 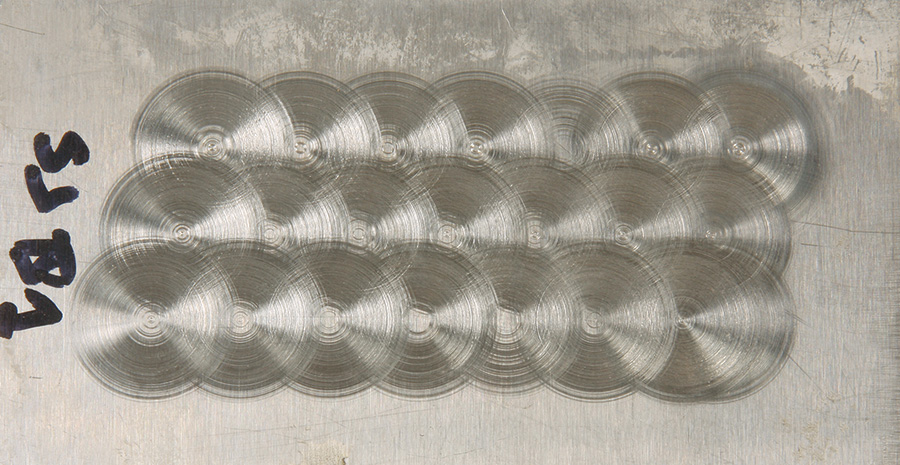 Comparison on stainless steel using the 0.012 wire brush (above) and the maroon Scotch-Brite disk (below). 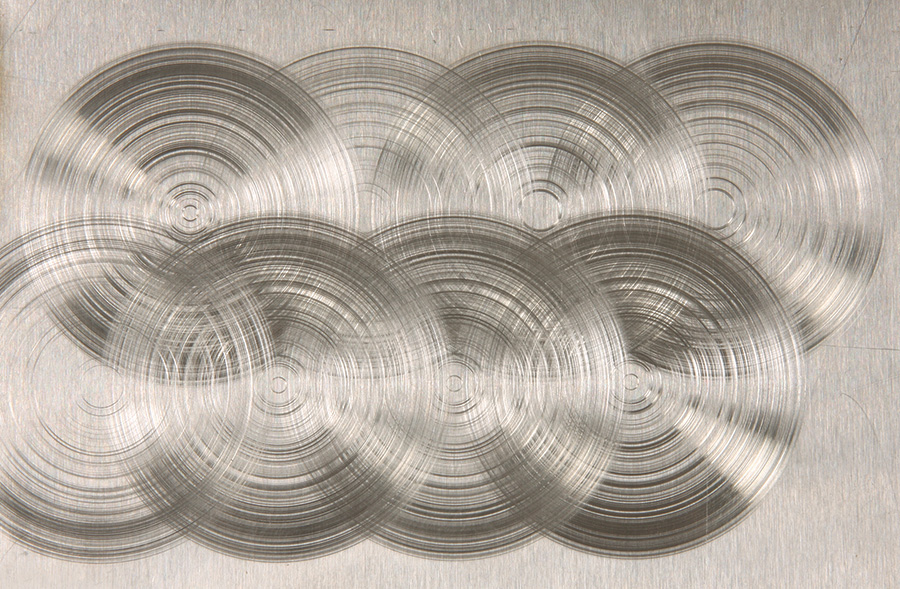 A few final tips are in order before you run out to the shop and start pearlizing everything in sight. (Hard to resist, isn’t it?) A good spot requires that the workpiece be held steady and the wire brush or Scotch-Brite pad be exactly perpendicular to the work. This means you need a drill press or a vertical milling machine. Using a drill press requires setting up some sort of fence to maintain your in-line pattern (rows). The side-to-side overlap can be off ever so slightly, and no one will notice, but if the row is not perfectly lined up, it will stand out like a sore thumb. Using a milling machine offers a level of precision that is hard to beat, but it’s awfully slow cranking the handles and, unless you have a good-size mill, it may take some gymnastics to maneuver or clamp large panels to the table. 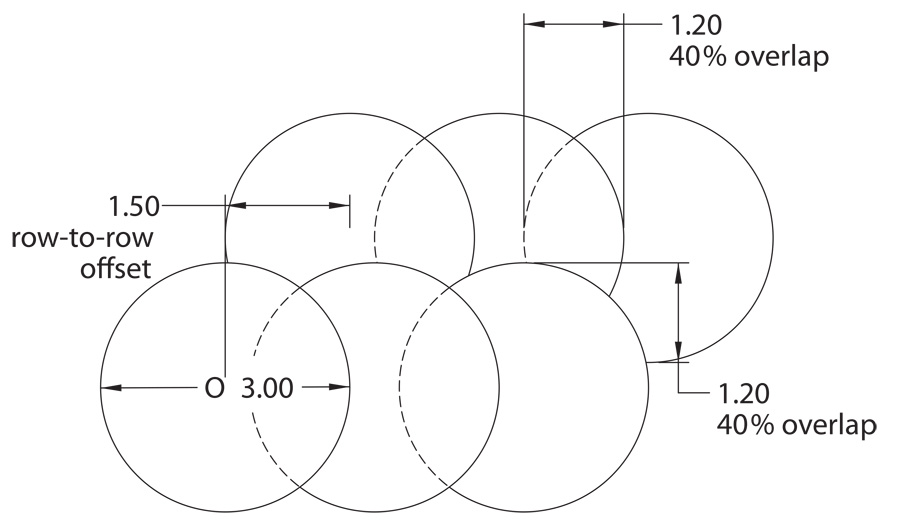 Robert Baslee of Airdrome Aeroplanes decorated his replica of Lindbergh’s Spirit of St. Louis using a 3-inch Scotch-Brite abrasive disk in a drill press. The panels were patterned while flat and “by eyeball” using the offsets and overlaps shown in this illustration.

If using an end brush, zip-ties can be used to bundle the bristles into a tighter circle. Adding more or less ties provides some control of the diameter and helps reduce feathering at the outside edges.

The brass panel I pearled looks spectacular, and to keep it that way, I sprayed on two coats of Krylon Crystal Coat UV-resistant clear acrylic. It might be wise to do the same on aluminum. Stainless steel is probably fine without any clear coat.

An interesting side note for anyone going to see or looking up the Spirit of St. Louis at the Smithsonian: The cowling, which was originally shiny aluminum silver, now has a distinctly yellow hue. A long time ago museum restorers applied varnish over the pearling in an attempt to protect it from corrosion. In the ensuing years the finish yellowed. The Smithsonian plans to restore the cowl and panels to silver in the future during the next restoration (when is yet to be determined).