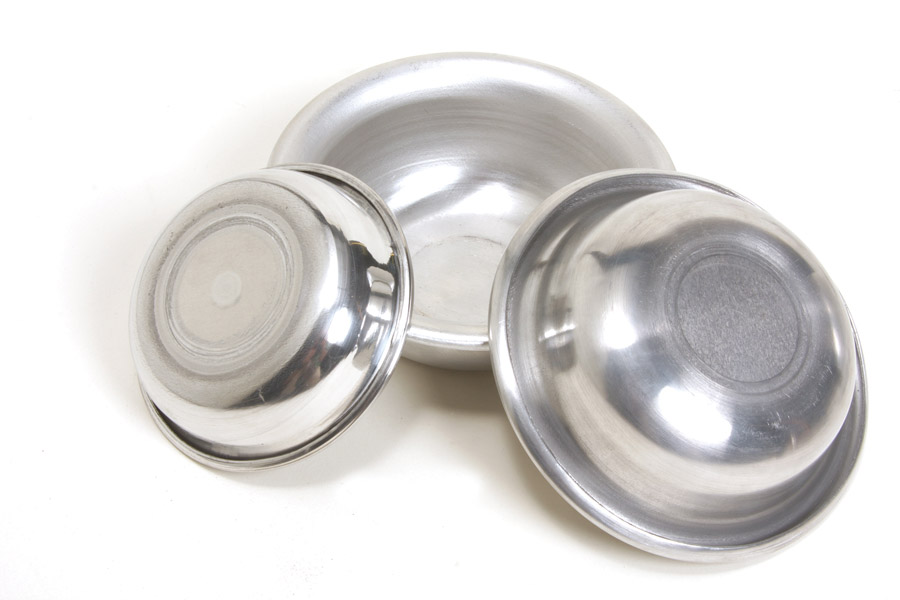 Spinning is a low-tech method of forming axially symmetrical shapes from sheet metal. It’s popular because there’s minimal set-up: with a wood lathe, some basic tools, and practice, you can make your own spin-formed parts that look like, and are as good as, factory-made.

I had never done any spinning, so I watched a good hour or so of videos on YouTube to get a sense of the tools and techniques involved before my first attempt. It took a couple of tries before initial success, and I revisited the videos frequently in order to solve issues with centering, trimming, and getting wavy edges (caused from uneven stretching of the sheet around the perimeter). I was encouraged with good results on only my third try, and subsequently, my success rate has been about 75%. 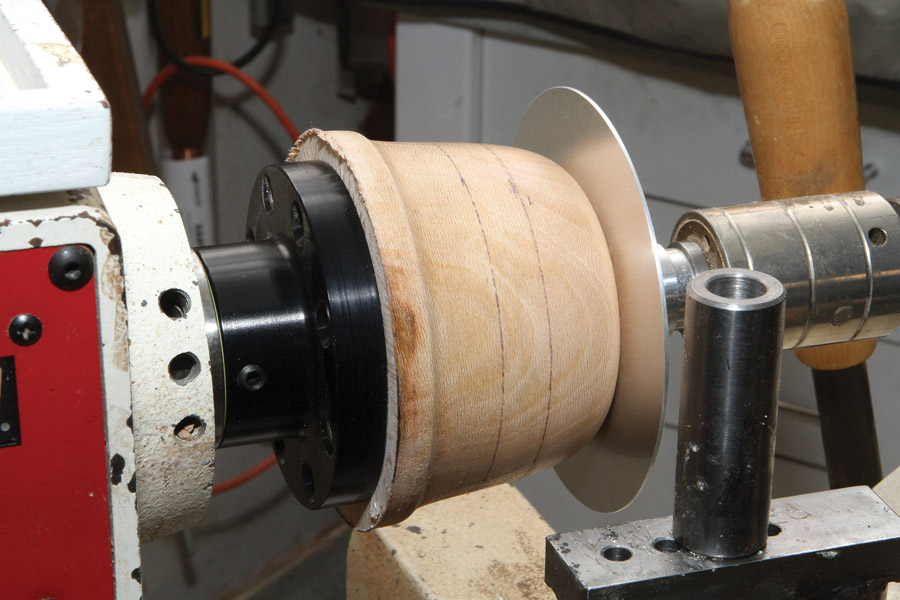 The basic spinning setup consists of the mandrel, the round blank of aluminum sheet, a rotating tail center, and a tool rest. This setup is for making a shallow dish, which is a good project for spin practice.

The goal of this spinning endeavor was to make a custom backplate for a second-hand prop spinner I acquired. The spinner was too big, but salvageable for my Jabiru if I could trim it from 11 inches diameter to 9-1/2 inches, and buy, or make, a new backplate. With no apparent source of buying a suitable backplate, I contemplated a variety of options, from machining one from billet (too heavy) to laying up one in fiberglass (impossible to attain a consistent thickness). Spinning seemed like the perfect option because that appears to be how many factory backplates are formed. 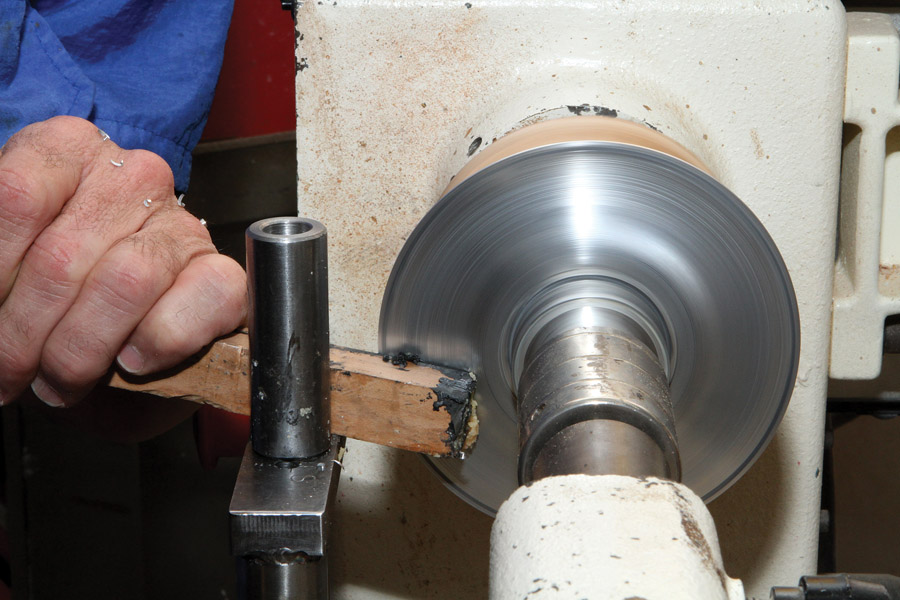 With a liberal coating of paste wax for lubrication and a suitable burnishing tool (in this case a simple wood stick about 12 inches long), the 0.040-inch-thick aluminum disk is stretched over the mandrel.

Any malleable material, in sheet form, can be used for spinning. I tested a sampling of O-temper aluminum sheet available from Aircraft Spruce: 2024 (0.040-inch thick), 3003 (0.050-inch thick) and 6061 (0.040-, 0.063-, and 0.080-inch thick). They all seemed to work about the same, the only difference being thicker material requires more leverage. The lathe used was my 2-hp Jet 1640 wood lathe, but almost any type of lathe will work, provided you can mount a tool rest with a fulcrum. The tool rest fulcrum is a basic necessity for spinning. It provides the leverage to control the tools (a burnishing bar or roller) that push the workpiece over the form. My tool rest was shop-made from a tool post welded to a short length of steel bar, which I drilled with a row of four 1/4-inch holes to allow some adjustability (see photos above). 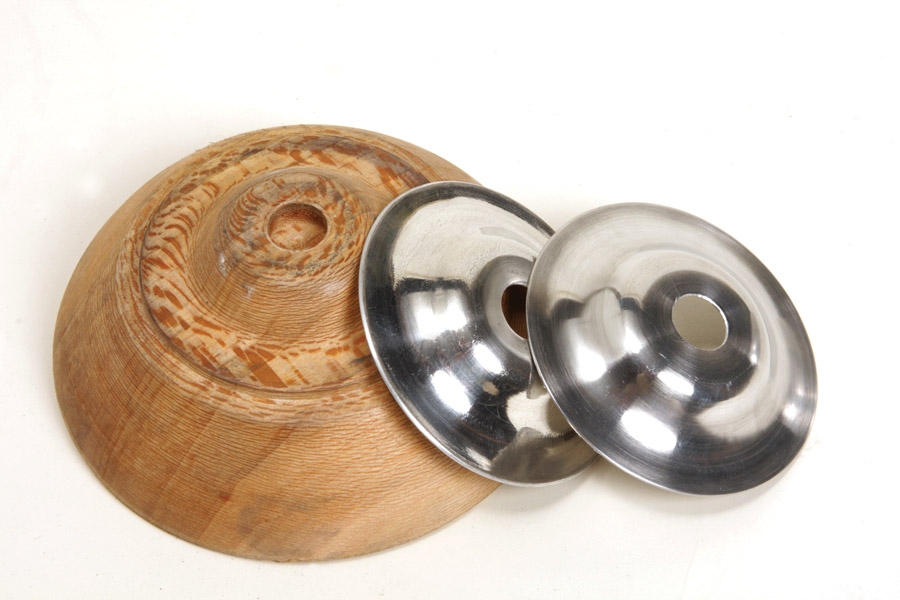 The four-inch mandrel for these 3-inch firewall shields was made from sycamore. Note the center hole in the form for locating the stock. The parts are 0.040-inch 6061-O aluminum. After trimming, they were polished to a mirror finish on the lathe.

All spinning projects start with making a mandrel in the desired shape and diameter of the final part, minus the thickness of the sheet if it’s critical for mating with another part. One-off mandrels are usually made of wood because it’s easy to shape and low cost. Any hardwood of reasonable density will work. Softwoods should be avoided because they dent too easily. Mandrels should be turned with the wood grain running end to end, or what turners call end-grain orientation. End-grain turnings are more stable than side-grain turnings. Depending on the species, wood expands and contracts with changes in moisture 10 to 20 times more across the grain than longitudinally with the grain. This makes a side-grain mandrel unsuitable for most spinning projects. Sanding, changes in humidity, or internal stress in the wood can noticeably warp a side-grain form, whereas the same factors barely affect an end-grain form. In a pinch, side-grain mandrels are fine for small-diameter objects with relatively shallow dish. The 3-inch diameter firewall shields (shown in the top photo) are a good example. But for anything with a deep dish or large diameter, the mandrel needs to be as stable as possible. Gluing several blocks together is a good option for making larger, and even more stable, end-grain forms. I glued up several pieces of scrap to create the nine-inch diameter mandrel for the backplate project. 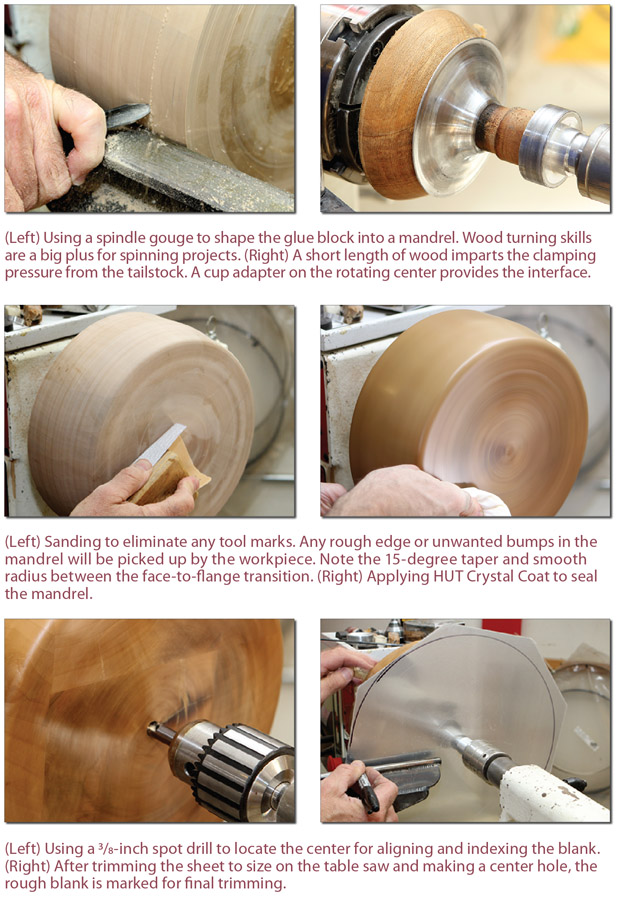 Once the mandrel is turned, it should be sanded smooth with 180-grit or higher, or at least until there are no visible ridges or tool marks. After sanding, I applied a coat of HUT Crystal Coat, a fast-drying shellac-based finish, to seal the wood. A finish helps keep fingerprints and other grime from contaminating the wood, but it’s not absolutely necessary. 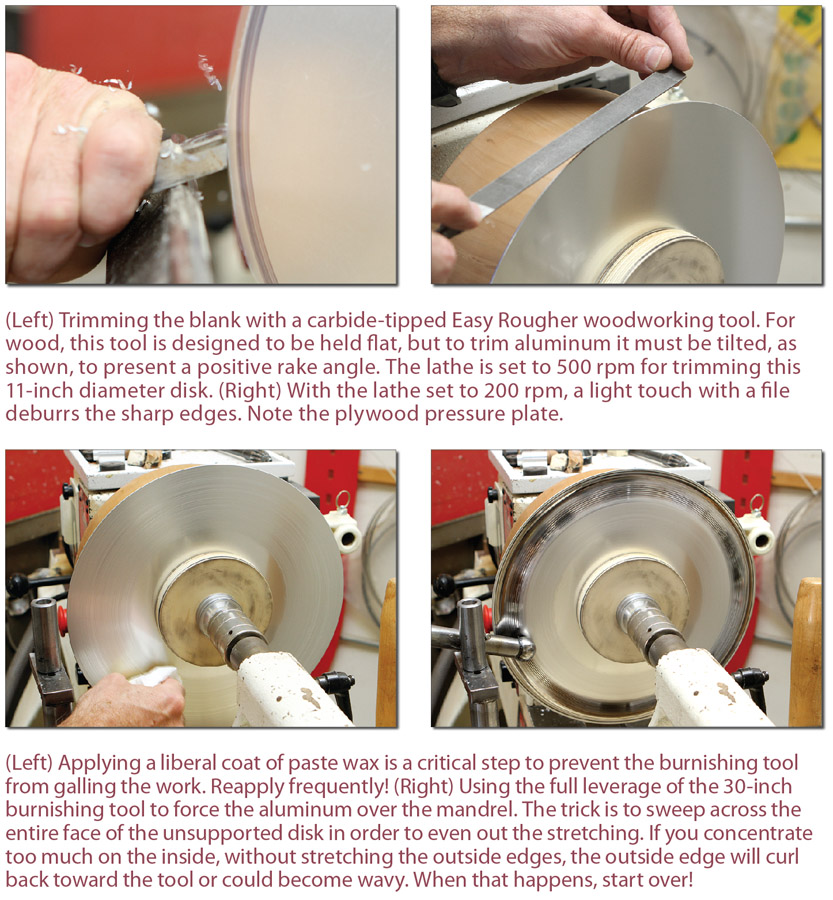 Finally, you need some basic tools to push, squeeze, and stretch the workpiece over the mandrel. These can be as simple as a stick or metal bar with a rounded and polished end. Roller tools are often used for spinning, especially for forming beads. It’s worth noting that I had just as much luck beading edges with direct pressure from a blunt stick on the 0.040 material as I did with a concave roller tool. Except for my trimming tool, which is a carbide-tipped woodturning tool, all my spinning tools were homemade.

The rest of the backplate project is best explained by the photos. To see how I made a firewall shield, visit kitplanes.com/spinning.