The DX15 was tried out in an LSA Cub with a rubber duck antenna as well as an external antenna.

With its wide range of Electronic Flight Instrument Systems (EFIS), Dynon Avionics has pretty well figured out the glass panel thing. Now the company is venturing beyond the eye-candy borders. Last year, it introduced a remote-mount transponder built by Trig and has more than broadly hinted at a remotely located com radio to come for its SkyView EFIS.

That product is tomorrow. The DX15 is today. At Sun ‘n Fun 2011, Dynon announced its this VHF air band transceiver, which will join a category already well covered by Icom, Vertex and Sporty’s. Dynon stakes its reputation on low cost and high value. Great. What’s the smokin’ deal on the DX15? Well, we don’t know, exactly. We’ll explain why a few paragraphs hence.

The DX15 itself is a compact and credible product. It’s the smallest, lightest VHF portable we’ve tried, but that size comes with compromise. It doesn’t have some of the higher-end features that the Sporty’s SP-400 or Icom products do, such as built-in VOR or localizer/CDI capability. On the other hand, who cares? Most of us use portable radios as com radios and depend on portable GPS for backup nav, so the DX15 gets no dings for lack of ancillary features. You get what you pay for (if you just knew how much you were paying…).

Another limitation of the DX15’s compact size is its battery pack. The only option is a dedicated lithium ion battery pack, the rechargeable chemistry of choice for many portable gadgets these days, though some of the radios have nickel-metal hydride instead. 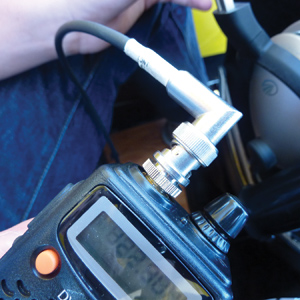 Like other handhelds, the DX15 will use an external antenna through 50-ohm coax.

While Li-ion chemistry delivers good power with a graceful discharge rate, it’s also slower to charge than other types of batteries and has self-discharge at an unknown rate. For this reason, Dynon recommends that for storage, the battery be removed and stored separately. This complicates its use as a backup com a bit, and it means more parts and pieces to keep track of. Also, the battery needs to be in a plastic bag or a container that protects its exposed terminals against shorting. (But a piece of tape would work with this pack.)

Like other handhelds, the DX15 can be used with an external antenna through 50-ohm coax, but there’s a twist: The antenna jack is a threaded SMA-type, so you need an optional SMA-to-BNC adapter. No big deal, but that’s another item to carry along and one that’s just begging to be dropped behind the rudder pedals. 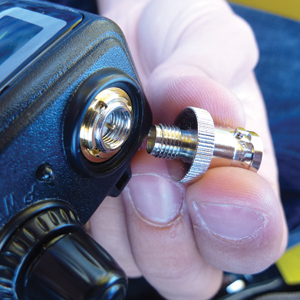 The catch is that the antenna jack is a threaded SMA-type, so you need an optional SMA-to-BNC adapter, just one more item to carry.

Performance wise, the DX15 is comparable to the Sporty’s SP-400 and the Icom products. We tried it in an LSA Cub, with both an external antenna and the standard rubber duck. Audio quality and RF punch seemed to be about the same as the Sporty’s and Icom products. All have 1.5-watt nominal transmit power, but the impression was that the SP-400 did a little better than the DX15 when both were used with just the rubber duck antenna from inside the airplane. From the ground, the two sounded about the same when the Cub’s external antenna was used.

According to the specifications, both the SP-400 and DX15 have -6dB receiver sensitivity, but the SP-400 clearly outperformed the DX15 in receiving distant, weak signals. On the ground, 7 miles from a neighboring airport, breaking the squelch on the SP-400 brought in a readable, if noisy, ASOS broadcast, while on the DX15 we could make out faint modulation, but nothing readable. 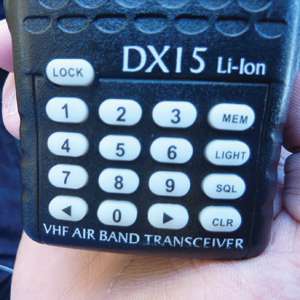 The DX15 has good basic features such as band scanning, multiple storage of often-used frequencies, good backlighting and something unique: a dedicated key to tune 121.5 MHz. 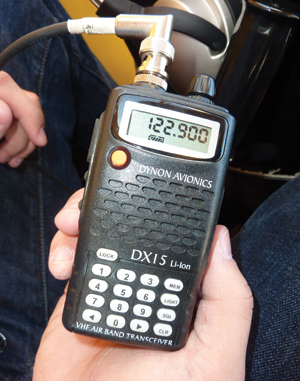 The handheld DX15 is a good start on the panel unit as well as being a capable backup in itself.

Given its credible performance, how does the DX15 stack up against its competition value wise? That depends. When Dynon rolled out the product at Sun ‘n Fun, it offered buyers the unique opportunity to bid on it auction style, with each of the legitimate top 100 bidders being awarded the radios at a price equal to the lowest bid among the 100 (the lowest bid turned out to be $156.10). The company says it made only 100 radios initially, but will keep the product in its line. At press time, Dynon had not set a final price, but suggested that it would be somewhere close to (but probably above) the lowest bid. If we were betting, we’d put a marker on $175.

That’s definitely in the ballpark. The Icom IC-A14, for instance, sells for as low as $199 to $215 and has VOR and com capability, plus an alkaline battery pack option that is a must for backup duty. On the other hand, the Icom isn’t as compact as the DX15, so if small size and simplified operation are drivers, the DX15 is a worthy choice. Otherwise it’s a credible if not exceptional portable radio. Dynon’s challenge is to leverage the DX15’s technology into a panel-mount com that complements its well-regarded glass. On that count, the company has made a good start.