The Experimental Aircraft Association’s Kermit Weeks Hangar is just down the road from the EAA AirVenture Museum in Oshkosh, Wisconsin. While the museum is the public face of EAA, the Weeks Hangar is where the action is. In the most basic sense, it’s a maintenance and restoration facility. But that’s a bit like calling the Grand Canyon a hole in the ground. It’s big of course, enough to comfortably work on EAA’s B-17 and Ford Tri-Motor. It’s well equipped, too: everything you’d need to fully restore almost any airplane of any vintage. On the day we visited, a 1917 Standard J-1 was next to a 2012 Cessna Skycatcher. But the space and the tools don’t make a shop a shop; it’s all about the crew. 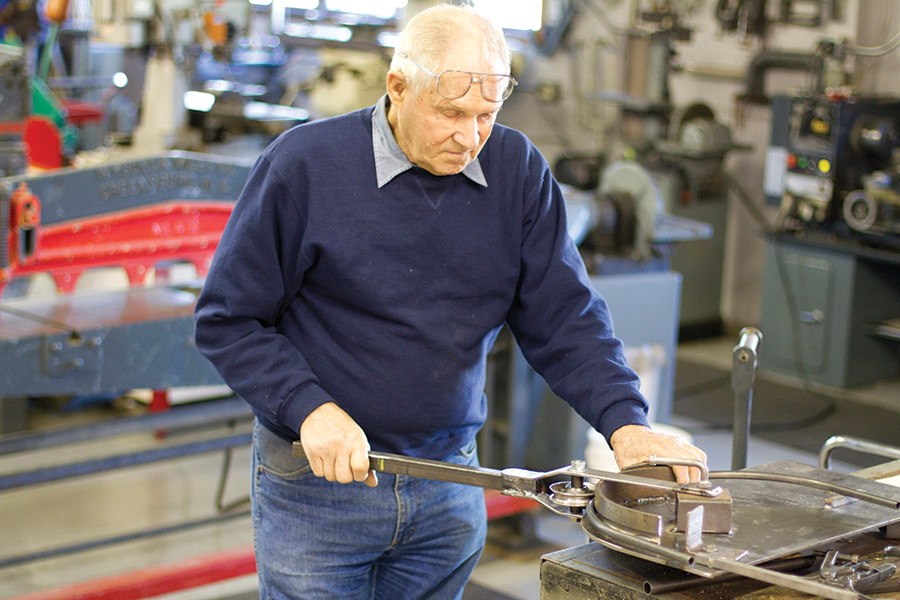 Bauken Noack uses a tube bender of his own design to fabricate Tri-Motor seat parts.

No matter what the challenge, the crew at the Weeks Hanger keeps the EAA fleet flying, and that constantly means coming up with unusual solutions to vexing problems. The case of EAA’s 1929 Ford Tri-Motor is a good example. As with most airplanes that are 80 years old, the supply of spare parts, especially original factory parts, can be a serious problem.

Quick flashback: About twenty years ago the passenger seats in the Tri-Motor were facing the end of their useful life. By the time the 90s rolled around, many of the seat frames had been broken and repaired, sometimes more than once. The time had come to replace them. 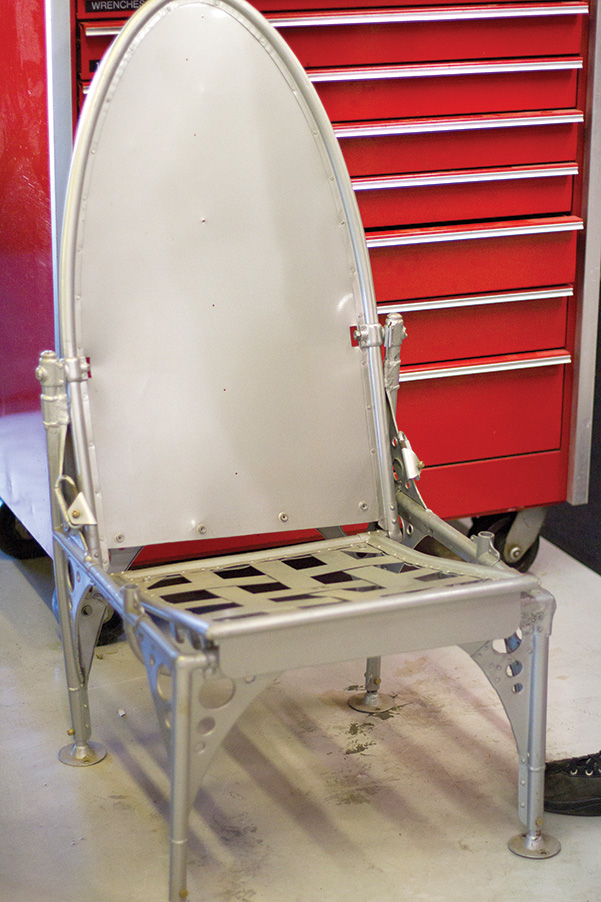 An original Tri-Motor seat. Although it looks to be of tubular construction, the frame parts are aluminum stampings.

The Tri-Motor seat structure epitomizes the ingeniousness of Ford’s industrial-age engineering: a set of lightweight, albeit complex, aluminum stampings optimized for production. I am doubtful the Tri-Motor’s designers anticipated any to survive into the 21st century, let alone bear the brunt of an ever-widening (i.e., fatter) 21st-century populace.

The simplest fix was not an option: new original seats don’t exist. They had no choice but to make replacements, and that required the blessing of the FAA. They were approved to make replacements only after submitting a design sample for testing and approval under a 337 Major Alteration form.

According to John Hopkins, who manages the EAA Weeks Hangar, “A 337 Major Alteration approval is a field approval process. This is a one-time, one-airplane approval.”

According to Hopkins, getting a 337 approval is no easy feat. Not only does the design have to meet the original manufacturer’s specifications, they have to meet modern requirements as well. Luckily, Ford had all the original testing records from 1929 on file and made them available to EAA. 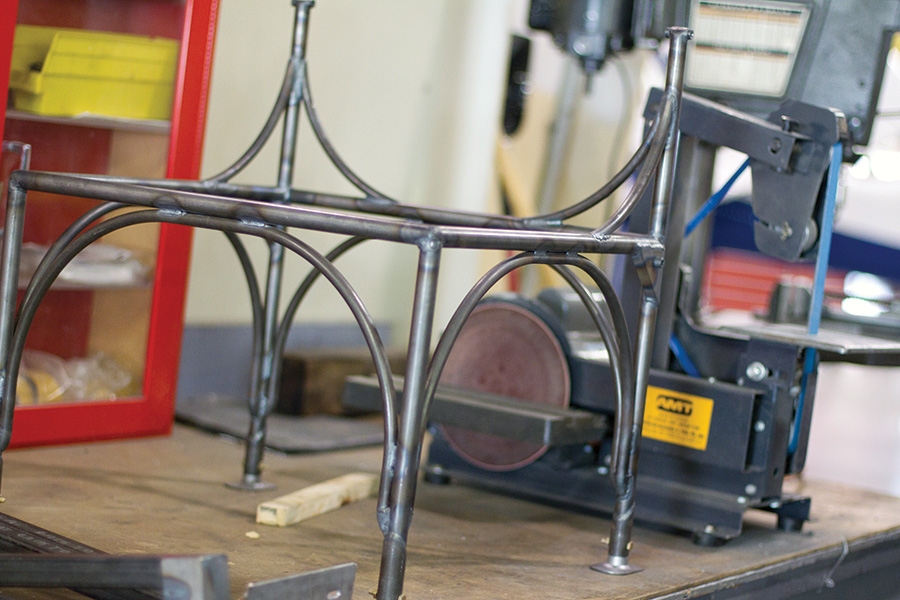 EAA’s welded-steel replication of the Tri-Motor seat (seat back to be added).

The 337 approval was granted in large part to Bauken Noack, who faithfully replicated the Tri-Motor seat by replacing the original stamped aluminum and rivet construction with a much more robust welded 4130 tubular structure. Noack has been around the EAA so long he had to admit he doesn’t remember ever having an official title. Hopkins told us, “As you walk through our museum and on our convention grounds, there are few areas that his influence has not touched. So I have to give him multiple titles: museum display designee, fabrication specialist, aircraft builder.” 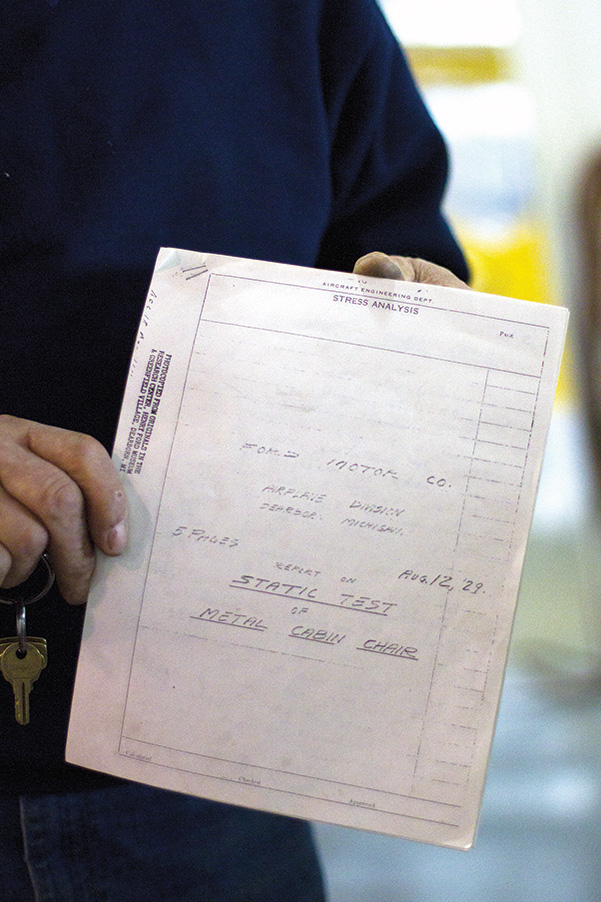 Flash forward to today: There are a handful of Tri-Motors still flying besides the EAA’s. All of them have or are starting to have the same seat problems. The owners and operators of these aircraft are working with the EAA crew at the Weeks Hangar to solve the problem. But since multiple aircraft are involved, the fix is outside the scope of a 337 Major Alteration approval.

According to Hopkins, “What we are doing now is one step further; we are applying for a Parts Manufacture Approval, more commonly known in the industry as a PMA approval.

“With the PMA-approval, it means our seats meet the safety standards. This allows them to be installed as direct replacements for original Tri-Motor seats without additional approvals or inspections.”

Although EAA is not in the business of manufacturing, they will be, for the purposes of this project, the de facto manufacturer of several dozen Tri-Motor replacement seats. 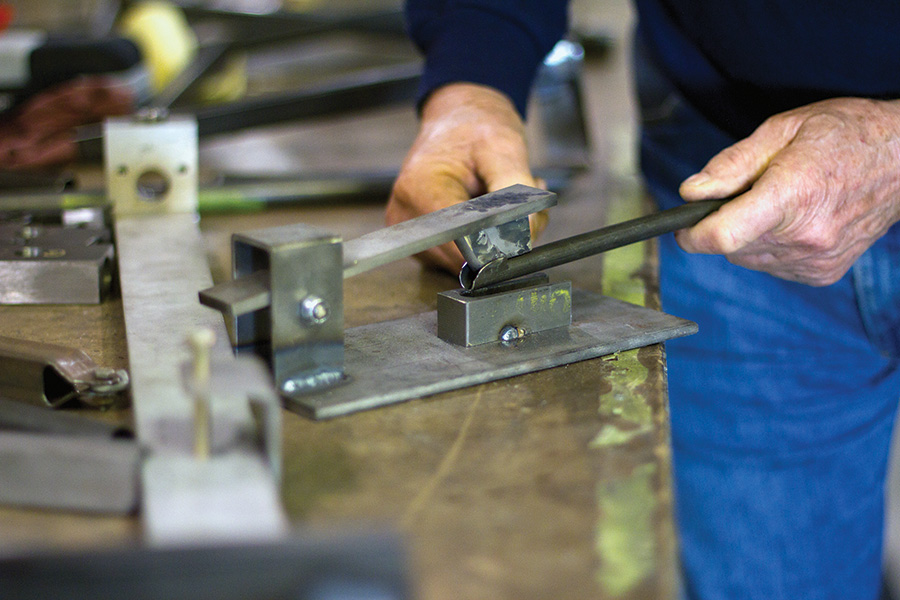 The front corners of the seat frame are blended smooth, an important feature for passenger comfort and safety. Noack welded up this fixture to simplify the task. 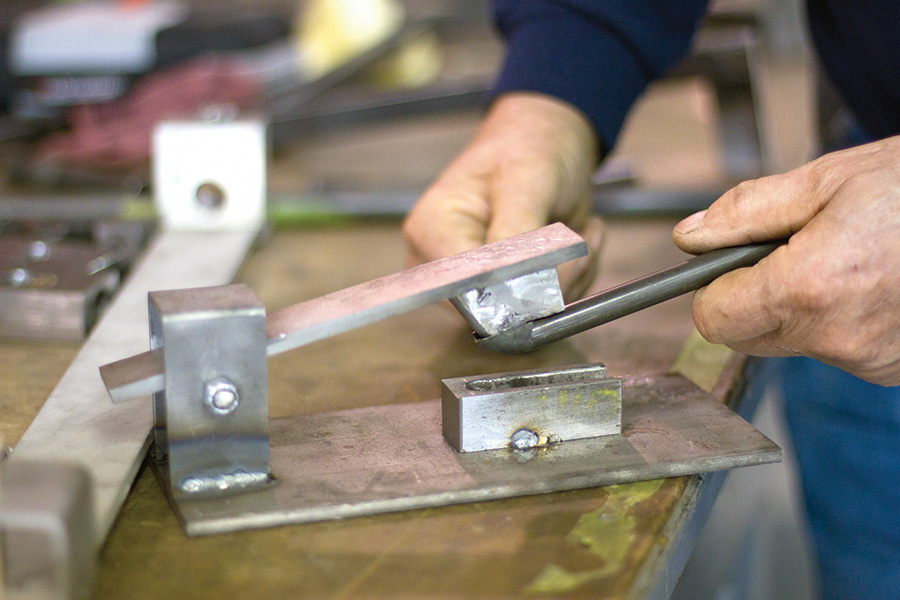 After swaging, the tube end comes out of the form rounded over and ready for mitering and welding. 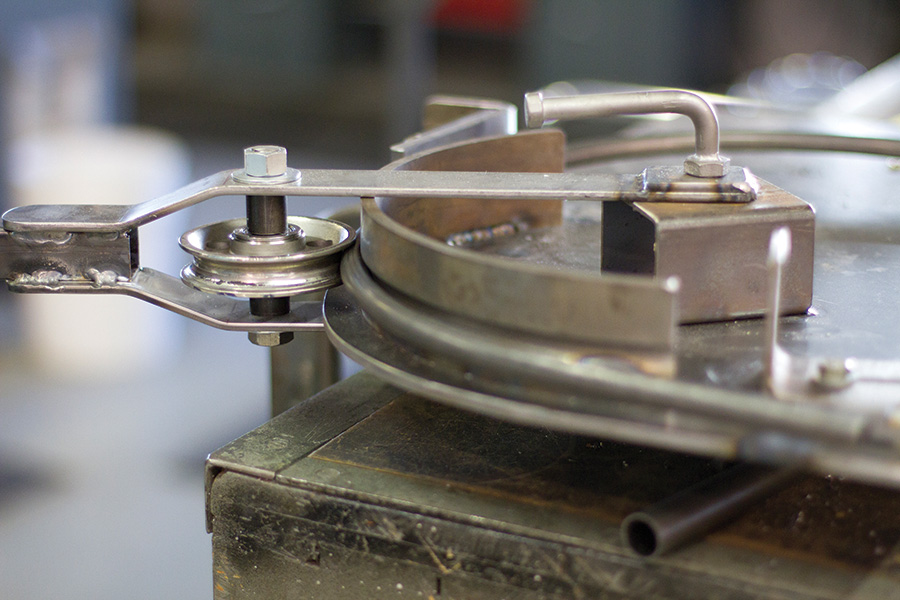 The seat back and leg arches have variable radius bends. To bend the small diameter tubing in a large arch, Noack made this tube bender out of some steel plate and an old control cable pulley. 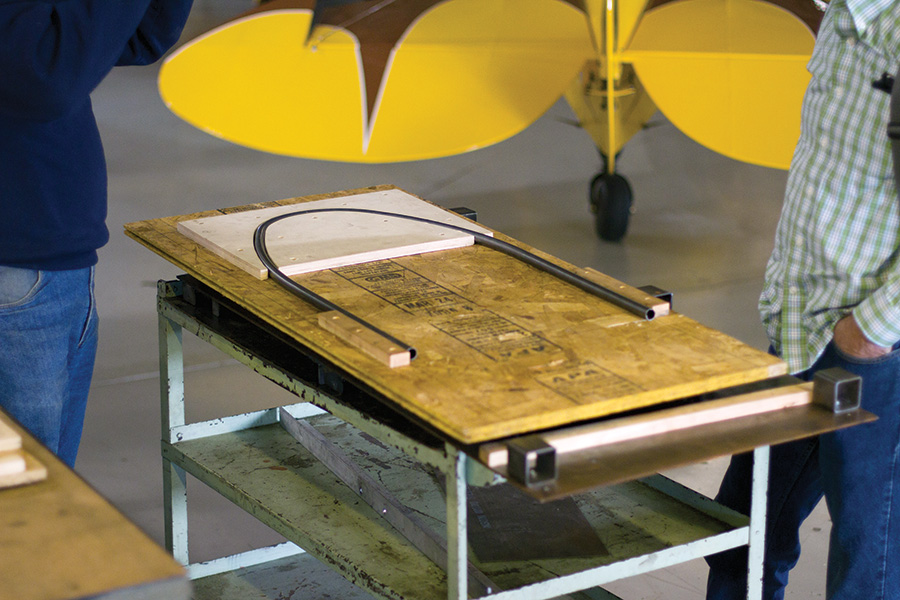 A seat back rail in a test-fitting jig. Noack’s approach to jigs and fixtures is keep it simple. For confirming the contour he uses a plywood pattern based on the original Tri-Motor seat back.

In the Shop with Bauken Noack

Since production is limited to a few dozen, not hundreds or thousands, and the EAA machine shop is not equipped with production machinery, the tooling and jigs Noack created for the project are designed accordingly. One thing that really stands out when we followed Noack around the shop as he explained each jig and process was how important it was to remain as faithful as possible to the original Ford Tri-Motor seat shape. Although the underlying structure is completely different (welded steel tubing versus stamped aluminum), with the upholstery in place, all details, including the curve and angle of the backrest, the scoop and taper of the seat, and splay of the legs, are identical to the original. 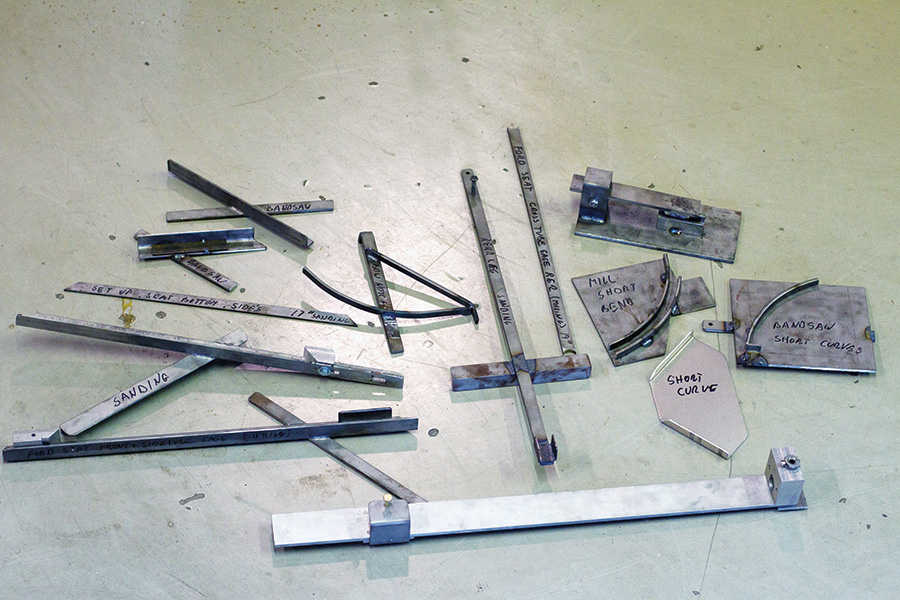 Sawing, sanding, and forming fixtures could be anything from plate to angle steel. 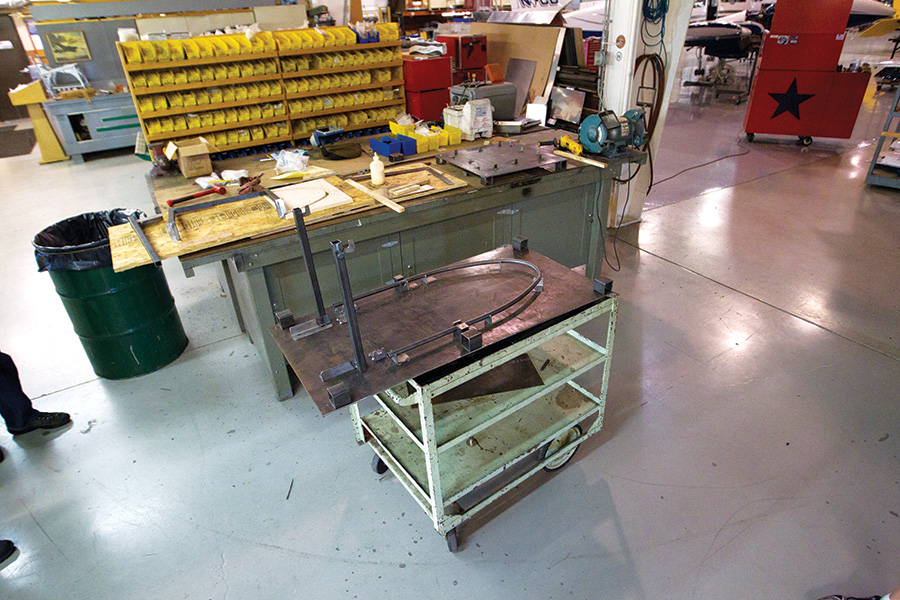 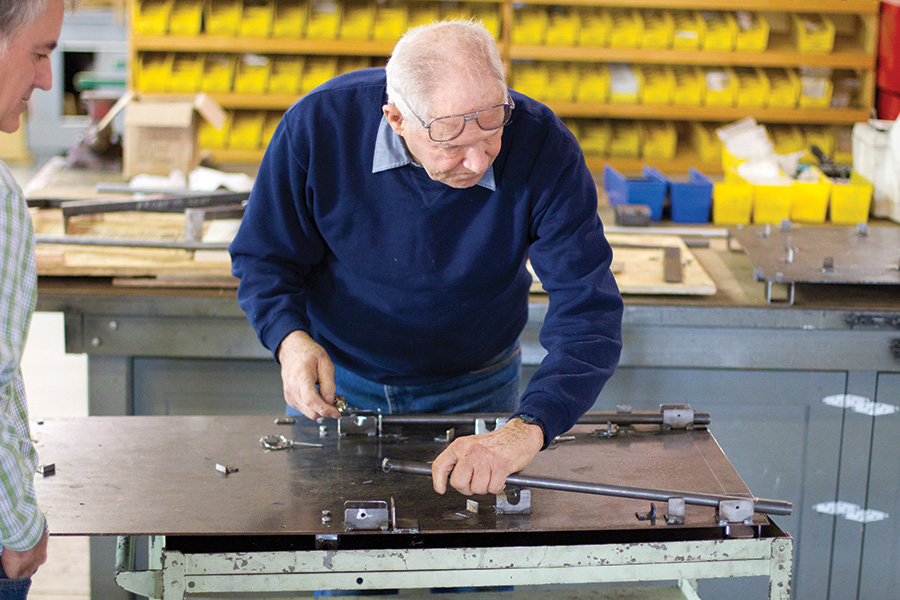 It’s always exciting to get out and visit different shops, meet people and see how other folks do things. No two shops are the same, and I always learn something about something! I was most impressed with their versatility and ability to fabricate whatever’s necessary. Whether it’s a seat for a Tri-Motor or a mount to store a B-17 prop in the rafters, they just do it. The shop is indeed well equipped, but other than a couple of really large bending and shearing machines, the rest of the tools (lathe, mill, bandsaw, etc.) could be found in any well-equipped garage or hangar shop. As I mentioned earlier, tools don’t make the shop, the crew makes the shop. And the Weeks crew makes a heck of a shop! 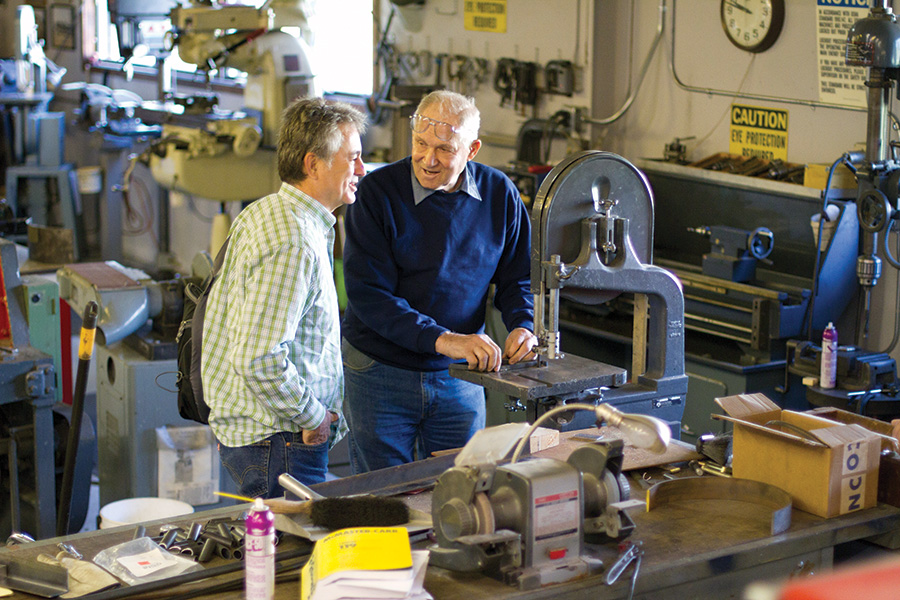 Noack at the bandsaw explaining to the author his approach to jigs for the Tri-Motor project.

The shop in the Weeks Hangar consists of basic, hands-on machines. Overview of the machine shop area. 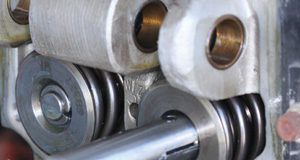