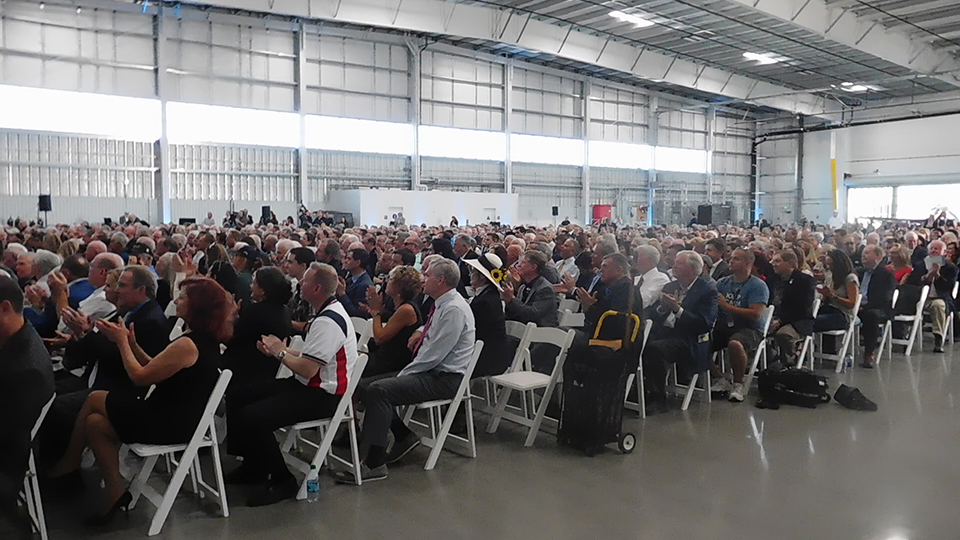 Lieutenant General Jimmy Doolittle described Robert A. “Bob” Hoover as “the greatest stick and rudder man who ever lived.” He was also among the most loved, as evidenced by the memorial celebration held in Hoover’s honor. More than 1,500 people gathered at Van Nuys Airport on a perfect CAVU day to remember the legendary aviator, who died Oct. 25 at age 94. A Who’s Who of aviation luminaries attended the event, which was emceed by aerobatic performer Sean D. Tucker and airshow announcer Danny Clisham.

“Mr. Hoover, are you looking down on us?” Tucker opened. Then, mimicking Hoover’s voice, he answered his own question: “You bet your ass I am!” Tucker then turned serious, saying that Hoover had inspired and empowered so many people, and if everyone could be just a little bit like Bob Hoover, the world would be a better place. Tucker’s spirited behavior might have seemed odd for a memorial, but Clisham quickly explained: “Sometimes you don’t know how to handle these things, these celebrations, these memorials, these tributes. But as Sean just showed you, we’re going to do this in the spirit of joy—unmitigated joy—because that is exactly what Bob would want.”

A short video by airshow pilot Ed Shipley highlighted Hoover’s career, then Clay Lacy, founder and CEO of Clay Lacy Aviation and holder of 29 world speed records, delivered a tribute to Hoover, his longtime friend. Rather than looking back, actor/pilot Harrison Ford spoke about what Hoover wanted to see in the future. Ford said he was sure that Hoover would want aviation to become more accessible to young people, and he hoped that new educational programs, including STEM (science, technology, engineering and math), would make this possible. About a dozen close friends were called to the stage to share fond memories of Hoover, then Neil Armstrong’s son Mark gave an inspired recital of John Gillespie Magee Jr.’s famous poem, “High Flight.”

Moments later, the large hangar doors slid open, and the crowd filed outside for military honors and flyovers, while listening to a performance by the Los Angeles Police Emerald Society Pipes and Drums Band. The March Air Reserve Base Honor Guard performed a flag ceremony, and the flag was presented to the Hoover family. Just as the Honor Guard finished a rifle salute, the flyovers began. Among the planes in the first formation were two F-16s from the U.S. Air Force Thunderbirds and one CT-114 Tutor from the Canadian Forces Snowbirds. These were followed by two F-86 Sabres and an F-22 Raptor. Finally, four WWII fighters flew a missing man formation, with a bright yellow P-51 soaring upward. Aviation Audio Video did a nice job of capturing the flying tribute and below that is the full hangar presentation by Airboyd.

Ed Wischmeyer - April 8, 2011
0
For the Pitts Model 12 from Jim Kimball Enterprises, the name of the game is power. By Ed Wischmeyer.

Making Progress on the GlaStar Project