Nah, I’m not going to talk politics or fashion—those topics are much too volatile and likely to spiral off into oblivion. I want to talk about engine management—setting the mixture in a reciprocating internal combustion engine. A hundred years of aviation history has given us a bevy of methods to use, some scientific, some backed up with oodles of experience and old wives tales. Hmmm…come to think about it, maybe we should talk politics instead—it might be less controversial!

Back when I learned to fly, my primary trainer was a 1943 J-3 Cub with original controls and instruments, meaning, there wasn’t very much to fiddle with in the cockpit. Stick, throttle, rudder pedals and a mag switch—oh, I guess there was a carb heat knob and a fuel shut-off as well. Not exactly what you’d call complicated, that’s for sure. The interesting thing to me today is that there was no cockpit control over the mixture. I didn’t find out what a red knob was until I had to do a few hours in the mighty Cessna 150 (90 knots of screaming terror) to get the required hood time for my private ticket. I doubt that we even did much with it then—after all, we rented the airplane wet, so how much fuel we burned per hour was inconsequential. 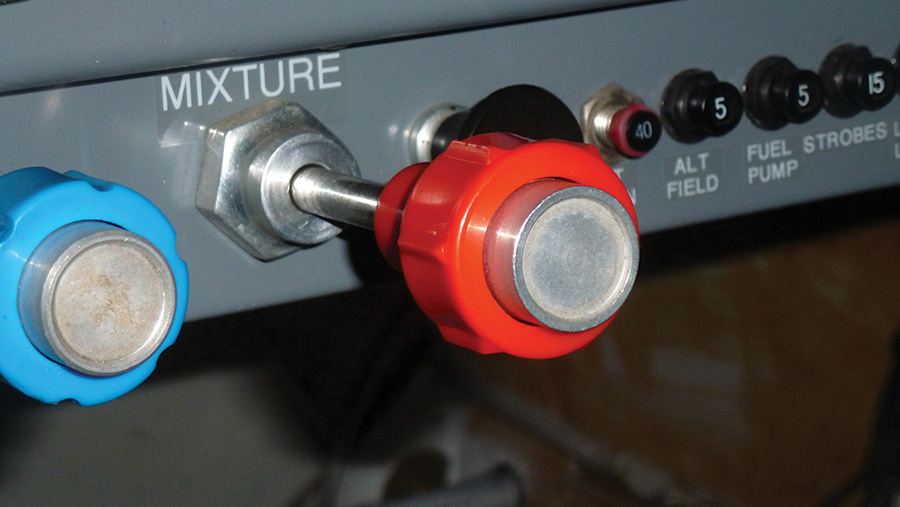 The old reliable mixture knob can be manipulated in many ways­—and with a simple, four-cylinder Lycoming or Continental, most of them will get you to about the same place.

It probably wasn’t until I owned my own airplane and had to pay for the gas directly that I began to really think much about the mixture knob. Back then, it was quite uncommon to see an EGT or CHT gauge in a single-engine cockpit. If you did find one, it was probably on a single cylinder, and didn’t give much insight into the health of the power plant. But it did give the pilot a tool for leaning if he or she had done a little homework on how to use it. Up until we could see such data, we leaned the old fashioned way—pull the knob out until the engine ran rough, then richen it up until it was smooth enough to satisfy you. The old rule of thumb given by Lycoming was that at full throttle, you were to run full rich until you were higher than 5000 feet msl, at which time you could lean for smooth operation (whatever that was).

A little study showed that this technique generally put the engine at about peak EGT—maybe a little bit rich of peak, depending on how smooth you wanted it to run. General aviation pilots heard about big engines burning valves, or jet engines having hot (hung) starts, and didn’t like the idea of being too close to the edge—possibly risking a stuck valve or damaged cylinder. The truth was, if you followed the manufacturer’s recommendation, you were probably in the safe region (below 75% power) where it was pretty hard to hurt anything—at least for the O-360s and smaller engines they were running. You saved fuel and got close to the performance listed in an airplane’s operating manual when it came to range and endurance.

With the advent of more modern instrumentation, airplanes started being routinely equipped with all-cylinder EGT and CHT instrumentation. In addition to this, electronic engine computers not only displayed all this data, they also added software tools that helped the pilot identify which cylinder had the highest temperature first, where the peak was, and whether further adjustment of the mixture had taken it leaner or richer. Pilots started discussing leaning techniques in terms of how far lean or rich of peak they were running. Since the typical carbureted engine does not have perfect induction, different cylinders (in different engines) would peak at different times relative to the others, so where you stopped in the leaning process still gave you a mixture variation in each cylinder. Fuel injection systems are better able to meter the fuel to each cylinder, and it is possible to make cylinder-by-cylinder adjustments (not in flight, but in balancing sessions) so that you can effectively get all the cylinders to peak fairly close to one another—this was a great advantage in running lean of peak, as you could get all of the cylinders over the hump at one time, and not deal with the variation of having one or two lean of peak, and others hovering near peak or on the rich side. 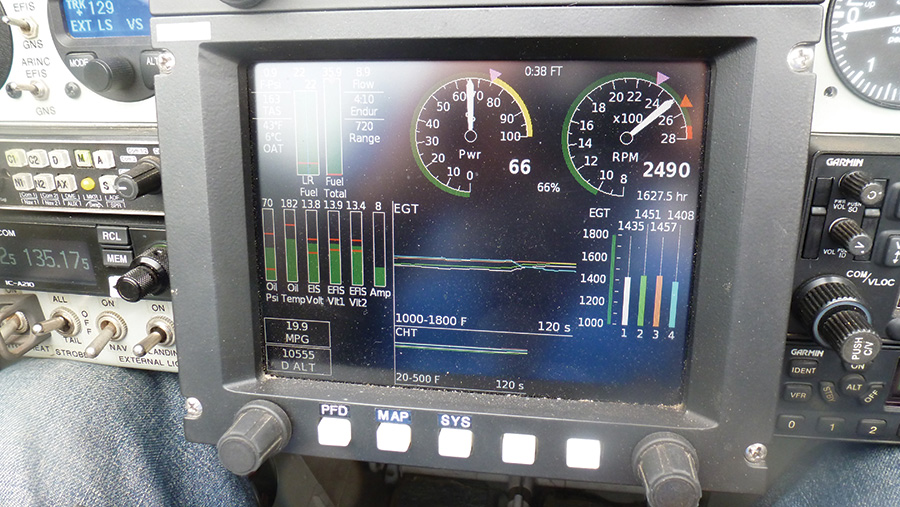 The Grand Rapids EFIS shows EGT plotted against time for every cylinder, as well as bar graphs. These can really help you understand what your cylinders are doing during the leaning process.

All this sounds complicated, huh? Peak, ROP, LOP, rough, smooth…wow, there are a lot of ways to lean these engines! How in the world is a pilot expected to know how it should be done? Well, the answer is that in the real world it is hard to mess up a normally-aspirated four or six cylinder Lycoming, so long as you aren’t running at maximum horsepower. In fact, Lycoming has said that if you are below 65% of rated horsepower, you can’t damage it with leaning, no matter what you do. This is comforting, especially in the world of fast, high-flying Experimentals—once you get above 10,000 feet or so, it is hard to get more than that horsepower anyway. That means you can lean very aggressively and not worry about toasting the powerplant, which is great news.

This still doesn’t lead to a direct answer to the question however—how should I lean? Well, let me tell you of my own experience with a broad spectrum of airframes, engines, and instrumentation systems. Simply put—do it however you want. You will probably end up at about the same place. I say “about,” because this is simply not as precise a business as you might think. That’s because these engines and their induction systems are not as precise as we might want. I have found that whether I use the fancy bar graphs, analog meters, real-time plots of four-cylinder EGTs versus time, fuel flows—or I just pull the knob out until it gets a bit rough, I end up at almost exactly the same place. Maybe I’ve just been doing it too long, but in airplanes I fly all the time, I can pull the knob to a particular point in its travel and be right where I want to be—sometimes, I just mark the spot with tape or a pencil, and pull directly to that point. Granted, it changes with altitude, but most airplanes are comfortable in a particular small range of altitudes anyway, so we spend 90% of the time cruising that airplane in the same pressure domain. 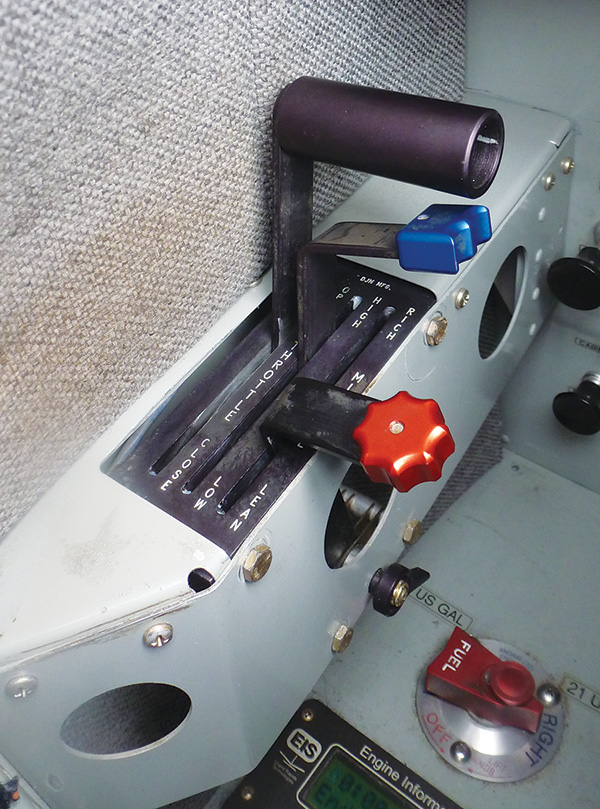 If a pilot flies the same aircraft for enough hours, they will learn where the mixture lever likes to live at a particular altitude. In the author’s RV-8, this is a little behind the word “mixture” on the quadrant.

Now I can see a bunch of folks jumping up and down in the back of the room, so let me emphasize a few disclaimers here. First, I am not talking about big-bore, turbocharged engines here. All you Bonanza and C-210 drivers can sit down. You’ve got very expensive power systems that can be damaged pretty easily by ham-handed operation, and need to be careful. For you, I recommend the wonderful work of John Deakin that is published in various places on the Internet. John has made a science of managing those fire breathing engines, and has a lot of good things to say. But when it comes to little normally-aspirated machines, I bet you’ll find that with a little practice, what I say is close to truth—we can make it a lot more complicated than it needs to be.

Many times, I have climbed to altitude in my RV-8 and leaned the carburetor using the fancy insights available on my EFIS display. It is amazing to watch the graphs of the four EGTs on the Grand Rapids EFIS screen as I pull the red lever back and the temps rise. They start out with a bit of a temperature spread, but as the mixture gets closer and closer to perfect (for the conditions), they all fall on top of each other and you can feel the strength of the motor building. Then one will start to drop, followed by another. When the third goes over the top, there is generally a little roughness that sets in—I am lean of peak by 50 degrees on the first cylinder about the time it gets objectionable, and I push the lever forward just a tad. Hmmm…how is that different from leaning until it gets rough, then sweetening it up a bit?

Now if I am high enough to be below 65% power, and ultimate range matters, I might just let it run a little rough, stay over the peak, and cruise a long way. But before you join me in this blissful place, take a look at the airspeed indicator. Peak EGT is also peak power (or so close to it as to be reasonably the same), and when you go over peak, you are producing less power. You don’t get something for nothing, so with less power, the speed drops off. Less speed means more time over the same distance and guess what—I bet you’ll burn the same total amount of fuel, and get there slower. Ever in search of efficiency, I have often found myself cruising along with low fuel flows, then noted that I’d lost 10 knots of airspeed, and I wondered why the trip was taking longer than I thought. Here is where it helps to have a miles-per-gallon read-out on that fancy EFIS. It might surprise you that the mpg doesn’t change much once you are near peak EGT—only the time enroute changes. It’s something to ponder the next time you set out to fly a long day.

But to get back to where we started; leaning a modern Lycoming or Continental is pretty much like leaning an old Lycoming or Continental—because they are the same engine. We can have all the fancy instrumentation that we want, but I bet that if you conduct a little experiment by covering up the gauges and leaning by ear and feel, you too will discover that you are ending up in almost the same place. Flying along with a rough-running engine is just not all that comfortable and few will do it—nor should they. Don’t get all strung out on the instrumentation; it is very nice to have, fun to look at, and interesting to play with. But don’t worry too much about it if you lose a thermocouple along the way. The engine doesn’t really know that you’ve been watching it that close anyway—just pull the red knob until it gets a little rough, then smooth it back out. I bet you get to your destination either way.

Dave Prizio - April 17, 2012
0
Dave Prizio attends the Lycoming Engine Service School in Williamsport, Pennsylvania, and comes away from the experience with many lessons.