Jabiru Truth
I thoroughly enjoy Bob Fritzs articles. And having built an airplane, I know that even the better plans-and kit components-are frequently less than ideal. Nice to see an author, and publication, with the guts to tell it like it is.

Right. No kit is perfect. The purpose of running builder series like this is to give builders the straight scoop. But there’s a follow-on benefit. When criticism is honest and based in fact-not just complaining-the kit manufacturers often take note. We understand that Jabiru has made substantive changes, particularly in the area of documentation, based in part on our feedback through this series.-Ed.

Volts Wagon
I truly wish non-electrical types would consult with true experts in the field before pioneering their own unique aircraft wiring and then promoting it to others before being fully scrutinized. [To Launch a Light Sport, April 2009.]I would not want to fly in an aircraft with only Polyfuses for numerous reasons. I point the author and your readers to The AeroElectric Connection by Bob Nuckolls before they consider trying something new and less expensive in their own aircraft.

Diane, What Are These Trees?
In the April Letters column, writer Mark Briggs spoke of the 406 MHz ELT not being effective under a layer of greenery. You responded with an observation made from inside a hangar. Not a valid observation! I suggest that you refer the testing to your very capable contributing editor, Jim Weir. Jim would use a scientific approach as opposed to the anecdotal. For a further comment, a local radio amateur, N8BIA, several years ago did some serious testing on the effect of trees and their foliage on radio frequencies in the 432 MHz range. He found much attenuation occurred to these signals.

The comment had to do with testing the SPOT device, not a 406 MHz ELT. And you’re right, the in-the-hangar test is not a good replacement for testing SPOT under a tree canopy. Hang on for one more month-well be printing an interesting story by Langley R. Muir with the results of extensive SPOT tests under controlled circumstances. Heres a teaser: According to the report, overall data recovery was 64%, with a variation between 0% in the bush and over 95% in the windscreen of [an] automobile or aircraft.-Ed.

Did You Just Call My Airplane Ugly?
Regarding the Zenith STOL CH750 (Letters, April 2009): Its mission-specific features are elegantly apparent, and beautifully functional. Ugly? Id bet some would also call the A-10 (tank killer) ugly, even though it may also be among the best at its stated mission. 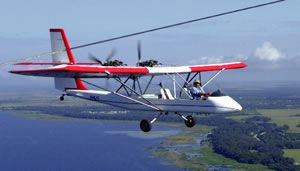 Richard Johnsons AirCam on Dave Martins Bahamas adventure. Does a second engine put you at ease?

Losing One
I just finished enjoying Dave Martins AirCam Adventure in the April issue. There was one comment that attracted a great deal of attention from me: …always scanning for places to land in the event of a power failure. I wonder if Mr. Martins comment about this overwhelming focus on engine failures is really a matter of training and instinct for all pilots or just some particular subset of aviators. I, for one, don’t think about it much at all except when considering testing a new plane or engine.

Perhaps this is a matter of flying style, especially about the altitude chosen. I prefer something between 8000 and 10000 feet MSL, where the number of square miles available for a forced landing is measured in thousands. I guess if a pilot prefers the kind of altitudes where staying clear of houses and assemblies of people is an issue, the possibility of an engine failure is a bigger consideration.

I wonder what the actual probability of engine failure is. Do certified engines work more reliably than auto conversions? What about Rotax and Jabiru choices that were actually designed for aircraft use compared to converted Volkswagen, Corvair and Subaru types? Are there any real numbers available to answer this question?

Height over the ground has everything to do with a pilots ease, especially in a single-engine aircraft. As for the engine comparisons: In our recent safety survey, auto-engine conversions were three times as likely to be involved in an engine-related accident. In general, the Rotax four-strokes have a very good record, while the Jabirus are too few in number to be statistically appreciated.-Ed.

How Long Will it Take to Build?