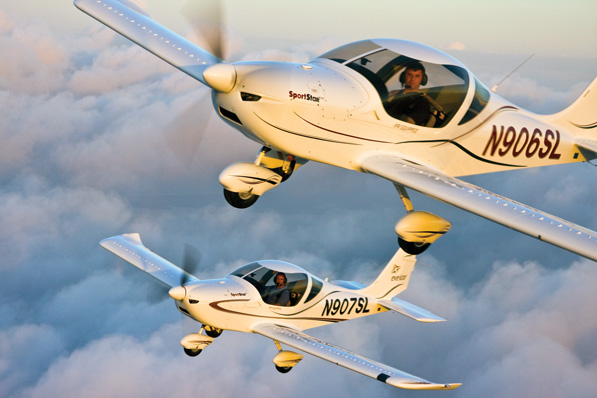 In 2005, the SportStar was the first FAA-approved Special Light Sport Aircraft.

Confession time: The original plan for this column was a review of the Urban Air Samba, a sleek all-composite low-wing design from the same company that made the Lambada motorglider reviewed here more than a year ago. It turns out that Sambas manufacturer, Urban Air, in the Czech Republic, is now in bankruptcy, and the Samba wont be available.

The SportStar was the first of more than 100 aircraft to qualify under the FAAs new Special Light Sport Aircraft (SLSA) category, and it was among the first to complete the voluntary LAMA audit of ASTM LSA compliance. I flew a SportStar three years ago, and the review appeared in the January 2007 issue of KITPLANES.

Dunham, who was on his way to the Northwest Regional Fly-In at Arlington, Washington, in the top-of-the-line, IFR-compliant Evektor SportStar, suggested that he drop by my home airport to fill me in on whats new with the Sport-

Star Max. Based on my SportStar flight in 2006 and years as a flight instructor, I had speculated that the airplane would make an excellent trainer. Evektor Aircraft obviously agrees; the company is marketing heavily to flight schools with a line of SportStars ranging from a model called Max Basic to the Max IFR. Dunham and I flew the Max IFR that he would show off at Arlington.

A month later at AirVenture/Oshkosh, the company displayed a SportStar aimed in another direction: a quickbuild Experimental-category LSA kit (ELSA) based on FAA-approved SLSA models. Unlike the Experimental/Amateur-Builts, which require the major portion to be built by the owner or unpaid volunteers, ELSAs may be completed to any level at the factory. Evektor Aircrafts web site shows large SportStar chunks completed for the ELSA kit.

Wings, empennage and fuselage appear to be complete. In fact, the company estimates requiring only 200 hours to finish the aircraft. Big pieces are connected, controls are hooked up, and the engine and its systems are installed along with other instruments and avionics. Evektor is evaluating the response from AirVenture before making a decision about marketing the kit. The major difference between a factory-built SLSA and a kitbuilt ELSA is that the kit aircraft may not be used for commercial purposes such as flight instruction and rental.

From a distance, the SportStar appears to be part of the plastic fantastic, all-composite generation of lightplanes. But in fact it is made of sheet metal except for wingtips, cowl and a few other compound-curvy pieces. Empty weight of the basic SportStar model-before loading it up with an array of goodies-is low: 683 pounds. With the LSA maximum gross of 1320 pounds, that leaves a useful load of 637 pounds.

The extra-large fuel tank (31.2 U.S. gallons) offers the option of two big people, 55 pounds of luggage and a bladder-testing duration of about 7 hours of flight. Or fly faster (110 to 115 knots) with reduced duration and range. The company lists total range as 700 n.m. and maximum duration of 8.5 hours. Power for all but one model is the 100-horsepower Rotax 912 ULS. The exception is the type-certified Rotax 912S in the IFR SportStar. Same engine, different testing and paperwork.

Controls are conventional stick and rudder plus toe brakes for differential ground steering. Mechanical flaps extend to 15 and 30 for normal operations, and to 50 for emergency descent or the need for a steep glideslope.

Flying the New One 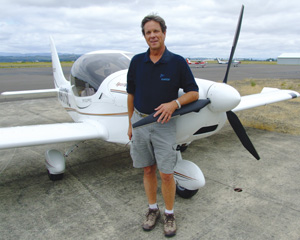 John Dunham stopped by en route to the Arlington fly-in to show off the new Evektor SportStar Max IFR.

A brief walk-around got us ready to try the new Max IFR SportStar. Settling in the left seat revealed one difference from the version I flew previously. This new throttle arrangement is the conventional center-panel shared power pole, compared with panel throttles to the left of each stick in the previous model. SportStar engine start was Rotax easy. Because of Dunhams recent flight, we didn’t need the daily-exercise Rotax 912 engine-burping to check oil level.

On takeoff, we rotated at about 40 knots and climbed at 60. Climb rate on the EFIS display was close to 1000 fpm. A broken cloud deck near 2000 feet modified my usual departure stall check. I set power not much above cruise and pitched up quickly enough to stall well before reaching cloud clearance limits. The buffet occurred at 42 knots, and the wings stayed level at the gentle break.

I had forgotten how little rudder is needed for coordination, even at low airspeed, which is pleasant. A full-deflection (aileron, not rudder) roll from 45 one way to the other 45 bank took 3.5 to 4 seconds: pretty much standard for LSAs. The usual pitch stability check was positive, which is also common (and required) for LSAs, unlike quite a few homebuilts.

Dunham hadn’t touched the controls, so I invited him to do so for a no-flaps approach stall while I watched and took notes. The break at idle power and with slow deceleration was at 44 knots and without a wingdrop. Yes, the SportStar should still be an excellent trainer.

Slow flight at 52 knots was comfortable and required a bit of right rudder, as a proper airplane should. Cockpit visibility is excellent, as you would expect under the huge canopy, and overall flight handling is also excellent. The feel and responses are quite similar to the Vans Aircraft RV-12 kit prototype, which I flew recently. Both airplanes are confidence-builders.

Dunham complained that stickgrips on the Max IFR SportStar are cluttered with too many switches, and approaching the landing pattern, I managed inadvertently to demonstrate his gripes-two of them. Aiming for the 45 entry, I attempted to key the transmitter, causing the plane to pitch up. Oops! That was elevator trim. Finding the actual push-to-talk button on the stick, I tried again. Then attempting to turn downwind, the airplane wanted to argue about it. Oops! Id hit another stickgrip switch and activated the autopilot in heading-hold mode.

Finished with stickgrip foul-ups, I entered the pattern at 80 knots, reduced power, set the first notch of flaps, and reduced speed to 60 knots for a touch-and-go, slowing to 55 knots on short final. The beginners-luck (well, the previous flight was three years ago) nose-high touchdown was soft. On the second approach, I was high enough to benefit from the second notch of flaps. Another quite acceptable landing resulted. I like this airplane.

As noted, the Max IFR SportStar carries the certified Rotax 912S. This adds about $6500 to the cost, not including other engine-related extras such as a big alternator. It turns out that the certified engine for IFR in an LSA is a requirement of Rotax, not the FAA. Rotax says you may fly the uncertified ULS version at night (assuming you fly with a Private or higher license; Sport Pilots cant fly at night). But don’t fly IFR with the ULS, Rotax warns.

The full complement of dual EFIS/engine monitoring system, Garmin GNS 430 nav/com, some backup round instruments, and full-capability IFR (not to mention the certified engine) brings the total for the Evektor SportStar Max IFR close to $170,000 delivered.

Who could justify this cost? Flight schools certainly could, especially if they also used the less expensive SportStar Max Basic (near $115,000 fleet price) for initial training. A SportStar owner-even one flying as a Sport Pilot who could not use the night or IFR capabilities-might justify the price if the aircraft was leased to a school or an instrument flight instructor. The bottom line? The latest version of the Evektor SportStar offers a lot of options, and its a wonderful airplane to fly.