One of the great freedoms Americans have is access to takeoff and landing areas. Unlike aviation authorities in some countries, the FAA doesn’t really regulate, or worse, prohibit, pilots from taking off from non-airport private or public property as long as there is no hazard to people or property. There are limitations, but those are put in place by state and local governments. Some rules are draconian, for example laws or ordinances making seaplanes illegal on bodies of water even while allowing motorboats on the same waters. Some states and local governments make landowners jump through bureaucratic hoops before they can fly off of their own land. 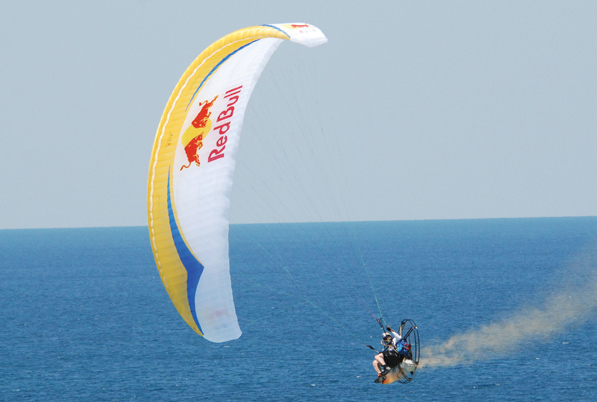 But even in places where laws and regulations might allow you to take off and land, it just isn’t practical to do. Beach flying is a great example of that. Most pilots would not want to try to negotiate the soft sand, the hazards and the surrounding crowds to take off from a beach, no matter how appealing the fantasy might be. Enter the humble, powered paraglider or, as they’re lovingly referred to by their pilots, PPGs.

What Is a PPG?

A PPG is a foot-launched, powered aircraft with a paraglider for a wing. A paraglider is kin to a skydiver’s parachute, but with some important differences-primarily the efficiency of the wing. While a parachute is a device used by skydivers to slow their descent and keep them from hitting the ground too hard, a paraglider is used to fight gravity and generate enough lift to carry a load up into the sky. The paraglider can use ridge lift, thermals, a friendly tow or a small engine to get into and remain in the sky. That engine is the "powered" in powered paragliding. 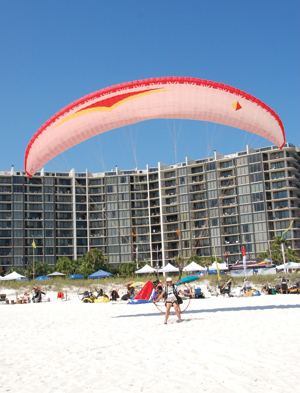 Powered paragliders are well-suited for beach flying because they are foot-launched. Human feet are much better on soft sand than most standard-equipped, wheeled aircraft. By necessity, takeoff speed is slower and little "runway" is needed, certainly less than the width of a typical public beach. Beach flying is so good that many powered paraglider instructors prefer to use beaches for training.

That leaves us with issues of access. Fortunately for PPG pilots, their aircraft are sufficiently rare, intriguing and benign that access to beaches is possible, if uncommon. Beaches are centers of recreational activity, and powered paragliders can fit well into the mosaic of things happening at the water’s edge. If there is a dark side to this, it rests with some pilots. There have been examples of beaches being closed off to PPGs because of the behavior of the pilots themselves. The aircraft fly under Part 103-the ultralight rules. The operating rules demand that pilots not fly over congested areas or in a way that creates a hazard. A handful of PPG pilots have ignored these rules in places and ruined access for the entire flying community. (Sometimes staying within the rules but acting inconsiderately has had the same effect.) It is a shame when a handful of pilots ruin it for other people, but that is a common risk in ultralighting and sometimes in aviation itself. All this makes the Beach Blast event in Panama City Beach, Florida, that much more amazing. 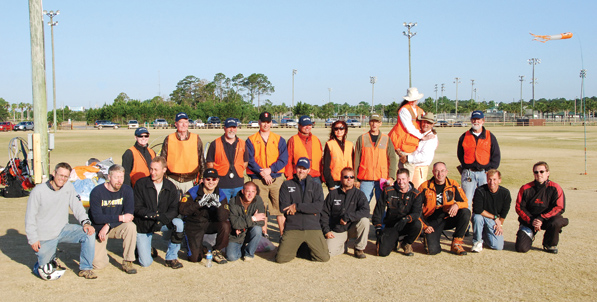 Competitors and judging staff from the PPG competition at Beach Blast.

Beach Blast is at least the second largest fly-in for PPGs in the nation-quite an accomplishment in three years. But the event offers what some others don’t, and what it offers is attractive to both pilots and their families.

Most PPG events are held in rural areas. The idea is to get away from congested airspace, airports and areas ultralights aren’t supposed to fly over. That is why many people have never seen a powered paraglider. The aircraft aren’t necessarily rare; they just stay away from airports and towns. 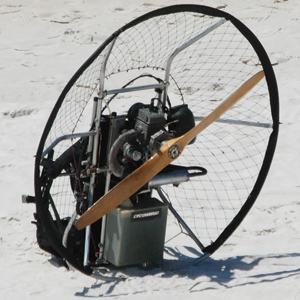 This is probably not a Lycoming.

Beach Blast is held right on the beach, in front of the Edgewater Beach & Golf Resort, a condo and resort complex in Panama City Beach, Florida. The sand, ocean, pools, bars, restaurants and half-million dollar condos are much more appealing than a tent or the semi-local motel that most fly-ins offer.

John Black is a PPG instructor and the event’s organizer. His goal is to give all PPG pilots the opportunity to fly in the same kind of conditions he gets to train in regularly. The event requires a lot of work and planning to bring to fruition, though the first year was probably the hardest. Black has to find the right resort property, work out flying protocols, coordinate with the city, attract sponsors and, finally, convince pilots that it is worth the spring drive to Florida. But as the event matures, these tasks become easier.

This year Black worked with the U.S. Powered Paragliding Association (USPPA) to add a separate site at which to conduct competitions. These competitions eat up a lot of space, and it was decided that a local park would be a better venue for them.

The vendor line at Beach Blast, held at the Edgewater Beach & Golf Resort on the Florida coast.

One reason this event works so well is that despite the hundreds of participants, the "flight line" is extremely compact. Paramotors were everywhere you looked: on the beach, by the pool, in the parking lot, in common areas and, of course, in the sky. But the small size of the equipment also makes it easy for vendors to show up and display their wares poolside. The booths were great opportunities to meet with equipment producers, designers and big names in the sport that you would rarely see gathered in one place. The vendors seemed to be doing a pretty good business. One company renting PPGs actually kept its half dozen or so machines rented out almost the entire eight-day event. Rentals were a boon for visitors who didn’t want to ship their equipment ahead (although shipping options were offered, too). 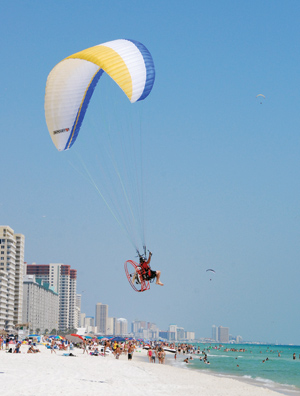 Taking off from the beach.

The event is always held in May, and it seems to be strategically timed to miss the spring break crowd, the motorcycle rallies and the cheerleading competitions. It also occurs before the crowds begin to gather for the Memorial Day holiday weekend. The timing is great, because the beach has fewer people on it, there is less of a wait for restaurants, and the weather is much warmer than the kids on spring break enjoy.

Winds seemed to be brisk for most of the event. However, the winds are a lot more laminar because they’re coastal winds. That means that after the winds shift from a land breeze to a sea breeze around mid morning, the pilots can fly all day until sunset. Of course, the morning land breeze was turbulent because it had to pass around the towers of the resort where it developed mechanicals. But this only made the event even more perfect, because pilots didn’t have to feel guilty about sleeping in a little each day.

If you want to fly Beach Blast next year, start flight training this year. While the beach is a great place to fly, the launch can be a little daunting for a novice when there is a crowd observing. Plenty of people were there just kiting their wings and practicing that skill without ever flying. But even if you don’t want to fly the event, it is a great way to spend quality time at the beach! 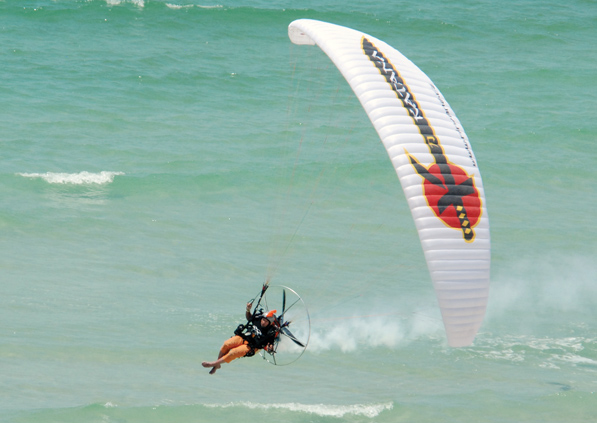 Pavel Brezina from the Czech Republic won the PPG competition at Beach Blast.

Time is Running Out!