I was lucky enough to crew on a Formula 1 team at the Reno Air Races before the tragic events leading to the event’s temporary cancellation. In between cleaning off oily cowlings and helping troubleshoot a quarrelsome engine, I had lots of time to wander the pits. While most racers were peppered with decals from one sponsor or another, one name consistently popped up on cheek cowls everywhere: Ly-Con. 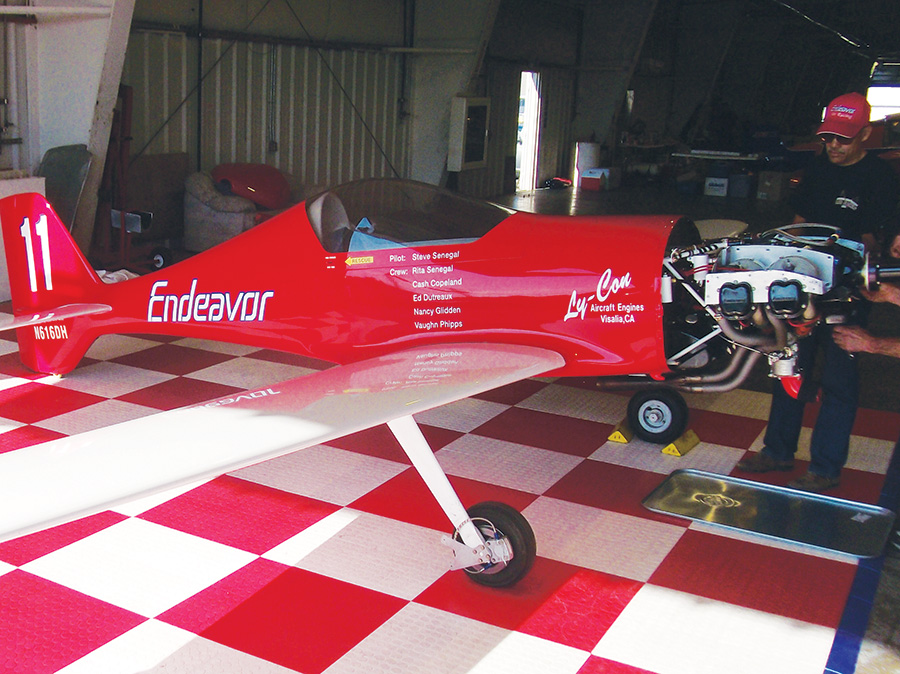 Steve Senegal with his Ly-Con-powered Endeavor.

Starting with a Used Engine

I’m in the middle of building an RV-4, so when I found what appeared to be a Ly-Con overhauled IO-320 in the classifieds at an unbelievable price, I jumped on it. On closer reading though, it turned out that the engine hadn’t been overhauled by Ly-Con; it had only been overhauled with Ly-Con parts (and porting), not by “the masters” themselves. Nevertheless, my curiosity was piqued, and I called seller Dave Duffer to find out more.

When I explained my reservations about buying an engine that had not been shop-overhauled, Duffer (an RV-4 builder and pilot with six engine builds under his belt) suggested we take the engine to Ly-Con for a dyno test. This would allow us to do an initial break-in of the engine, get a horsepower reading (important, because I’ll be using a fixed-pitch prop) and address any glitches that might show up before installation on my plane. Duffer’s offer to fix, at his cost, any problems that showed up on the engine during the dyno hooked the sale, and we agreed to meet at Ly-Con the following Friday.

While racers often use dynanometers to measure the effect of various engine modifications on horsepower output and overall performance, it’s less usual for homebuilders to put their engines on a dyno. But dyno testing, even for common or garden-variety aviators has its benefits—especially for kit builders, who often buy mid-time or overhauled engines of sometimes unknown or dubious provenance. When I asked Ken Tunnell, who started Ly-Con with his brother Bryan in 1980, what the benefits were to non-competition pilots, he said, “The FAA requires all new engines to be run in a test cell before going to the customer. The benefit of doing this on overhauled engines is that it allows you to monitor parameters like oil temp and pressure and CHTs/EGTs. It’s much easier to address problems on the test stand than on an engine already installed in a plane.” 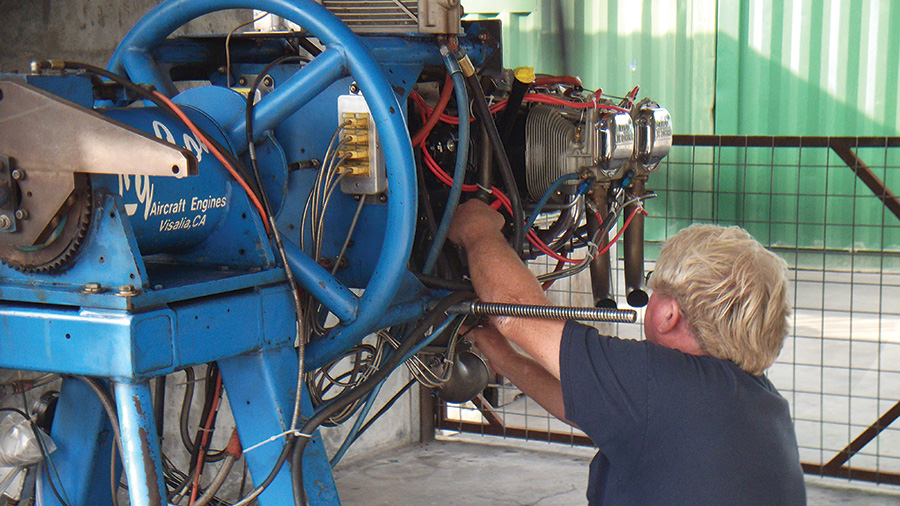 Indeed, within minutes of starting up my IO-320 for the first time since overhaul, an extremely rough idle suggested all was not well. The engine was immediately shut down, and inspection quickly revealed fuel streaming down all four intake tubes from where they entered the cylinders. It turned out the collars holding the intake tubes to the heads were meant for an O-540, and although by all appearances identical to those used on O-320/360s, they were slightly oversized. This resulted in a loose fit through which fuel was escaping on its way from the manifold to the cylinders.

A few minutes later, new collars, procured from Ly-Con’s vast supply of parts, had been swapped for the oversized collars, and the engine was back up and running. It now idled fine, but the mixture was wandering at higher rpm. Tunnell and Duffer suspected the fuel servo (my engine is an O-320-D1A that has been converted to fuel injection), which was apparently miscalibrated, might be the cause. Duffer had another servo in his truck, which we bolted on; the situation was slightly improved but still not entirely satisfactory. It was decided the test should continue, as we could fiddle with the mixture from inside the test room (the servo was eventually sent out for calibration after the test). The engine ran well enough now that Tunnell handed over the next hour of break-in to a technician, who ran the engine up and down an rpm ladder.

Once this initial break-in was completed and Tunnell was satisfied that the engine was operating within parameters, it was time to see what she could do. He slowly ramped up the power, and on the third or fourth test run the engine maxed out at 203 horsepower (corrected to standard conditions) at 2750 rpm. Looked like those 10:1 Ly-Con pistons and the intake/exhaust porting did their job. 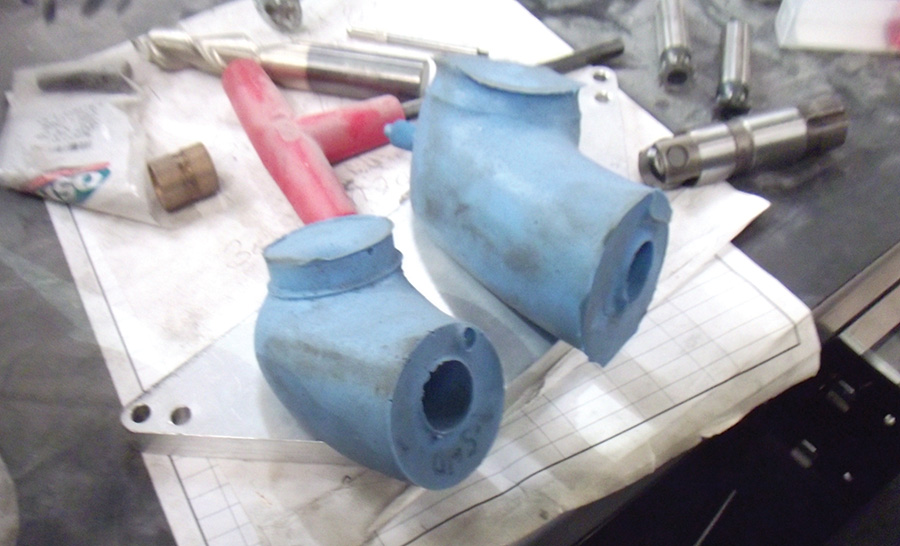 3D laser scanning of these silicone molds provided the coordinates for Ly-Con’s CNC porting machine. The soft rubber allows molds with a negative draft to be removed without destroying the original part.

The oil pressure was slightly low, so Tunnell made gradual adjustments to the oil-pressure check valve until the engine ran at the desired 75 psi. We then pulled the plugs, which looked fine. However, the lower plugs were still wet, indicating that the rings were not yet seated and there was still some blow-by in the cylinders, so it would still be premature to do a compression check. By now it was near 5 p.m. and Tunnell needed to go hand out paychecks (remember, it was a Friday); we decided to run the engine through another ladder the following morning and then check compression. Despite the recession, Ly-Con is busy enough that a good number of employees choose to work Saturdays as well.

The following morning I arrived at 8 a.m. to find that the engine was already being put through its paces. I took Tunnell up on an offer for a tour of the shop by Gerry Fisher, one of Ly-Con’s 22 employees.

“Ly-Con overhauls about 200 engines per year, fairly evenly split between certified and Experimental,” Fisher said, “and even a bit of overseas business, due to the weak dollar. On the Experimental side, there is obviously a lot of hot rodding of engines, beginning with [like mine] high-compression pistons and intake/exhaust porting.

“While the high-compression pistons are Experimental only, our CNC porting removes so little material from the manifolds that the FAA does not require an STC for this mod, possibly the cheapest way to add 10 horsepower to a certificated engine.” The five-axis milling machine was zooming through its million-or-so lines of code during my tour; each porting job takes approximately 40 minutes per cylinder, so the machine is limited to doing about two engines per day. Fisher explained that dyno tests of the ported intakes indicate that the slight ribbing left over from the tooling process actually turbulates and improves air intake and so is left in place. This is not the case with the exhaust ports, however, so they are smoothed by hand after the head leaves the CNC machine. 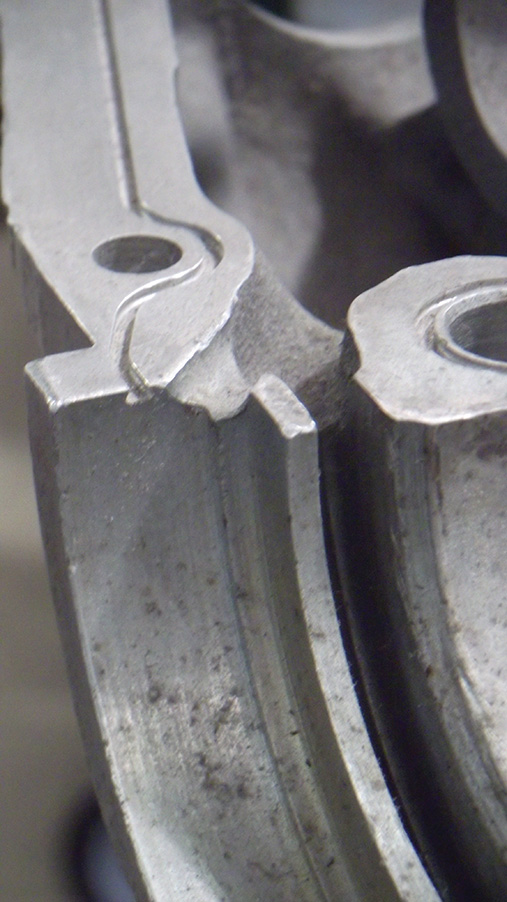 Upon arrival at Ly-Con, each engine is assigned its own cart and a technician who assembles the engine from beginning to end. However, as part of the company’s quality control, each step is checked by another builder, and sometimes two, so that at least two and sometimes three people have checked the engine at every step along the way. Fisher said that it is very rare for Ly-Con to need to provide warranty work on their engines. All parts carry a paperwork trail. “It starts with 14 pages,” Fisher said, “and ends up as a file an inch thick on my desk.” Parts that are no longer fit for service are stored for a minimum of six months, in case a customer wants to investigate an old part for whatever reason.

The first step of overhaul—once the engines have been recorded and tagged either blue (certificated) or green (Experimental)—is disassembly, followed by a meticulous cleaning. The aluminum parts are then subjected to the Zyglow process, a fluorescent dye that allows a technician to spot cracks in the aluminum using a black light. Ferrous parts are similarly Dynafluxed. Out-of-spec parts are replaced, mods and STCs performed, and once the overhaul is complete, the engine goes out to a test cell for the requisite break-in before being shipped off to the customer.

By the time the tour was done, so was my engine test. Once the tech had finished the second rpm ladder, the engine was checked for compression (78/80 on all cylinders), disassembled, filled with preservative oil and desiccant plugs, wrapped in plastic and bolted to a pallet for the journey home.

At nearly $1,000, the price of a dyno run seems like an unnecessary expense to some builders. For me, the benefits were threefold. First and foremost, it gave me the necessary preliminary evidence that the engine I purchased will run reliably once installed on my RV-4. It will be one less worry on my mind when I go up for that first flight. Second, it allowed me to conduct the critical first hours of engine run in a controlled environment supervised by engine experts, something that maximizes the chances of reaching TBO. Finally, the dyno test provided me with calibrated engine-performance measures that will allow me to get the most out of my engine as well as convincingly represent the engine performance to potential buyers should I ever decide to sell my airplane. In my mind, this is money well spent—more of an investment, really, because it will pay off both in peace of mind and future value of the airplane. So consider scheduling a dyno test for your engine before final installation. You’ll learn a lot about the most important piece of equipment in your plane.

Scott Spangler - April 20, 2017
1
Each of its unusual features serves a purpose.