Many builders stay away from building their own fuel and oil lines because they are worried about being able to build them right, or because they think that special tooling is needed. While many hose ends do require special dies and installation tooling, Aeroquip ACP fittings are not only reusable, they require only standard tools to install. Let’s take a look at the making of a simple steel-braided oil cooler hose to show you how. 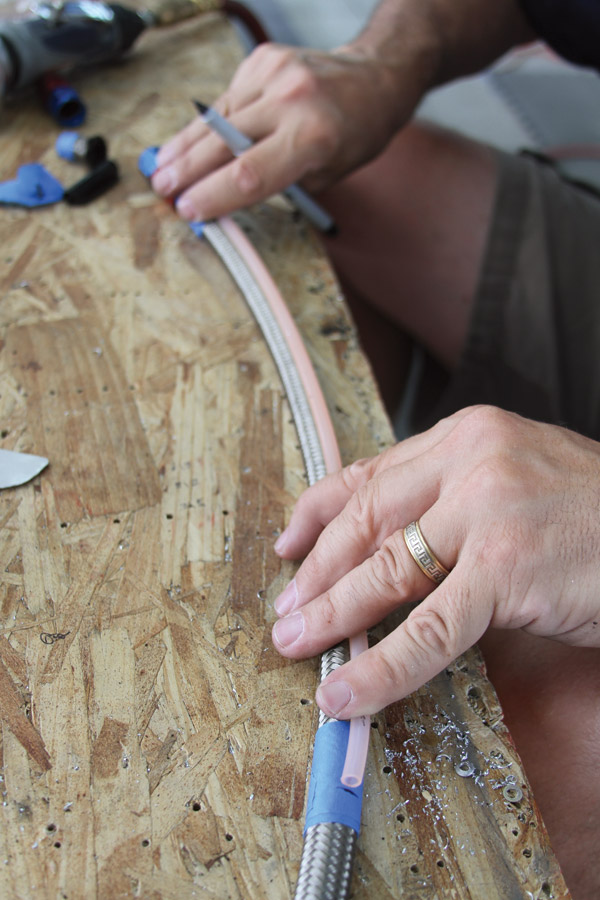 Measuring the proper length of hose to cut for the second end is easy with a mock-up hose made from poly tubing.

The first thing I do is measure the necessary hose length using a piece of expendable polyethylene tube—the kind used for pitot/static lines. This can be obtained cheaply at the big-box home improvement stores and has a bend radius that naturally mimics -6 or -8 steel braid hose. I mock up the routing of the hose from fitting to fitting, measuring from the ends of the two nipples. This then becomes my guide length—you can measure the resulting mock-up line or simply use it as a template.

The initial key to a good installation is to cut the end of the hose square, with no little pieces of braid sticking out. To do this, wrap some masking tape tightly around the spot you are going to cut, then use a standard cutoff wheel on a die grinder to make a nice square slice through the tape. The tape will contain the small wires of the braid and keep them from fraying. Start with a length of hose that is at least several inches longer than you need for the finished assembly, and just cut an inch or so off one end to make it square (we’ll completely install one end before carefully moving to the other end to make the assembly the correct length). 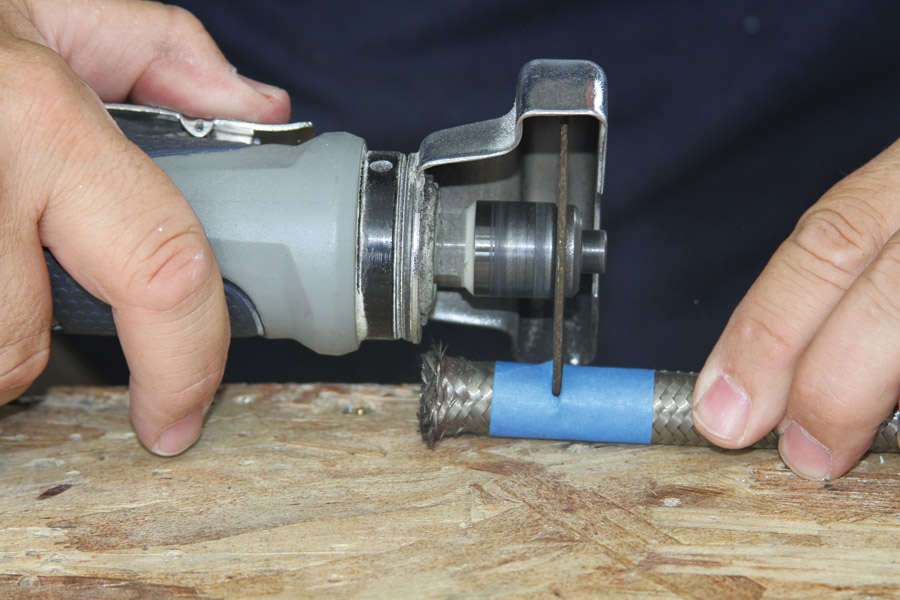 A cutoff wheel held square to the hose is a great way to make a clean, straight cut. 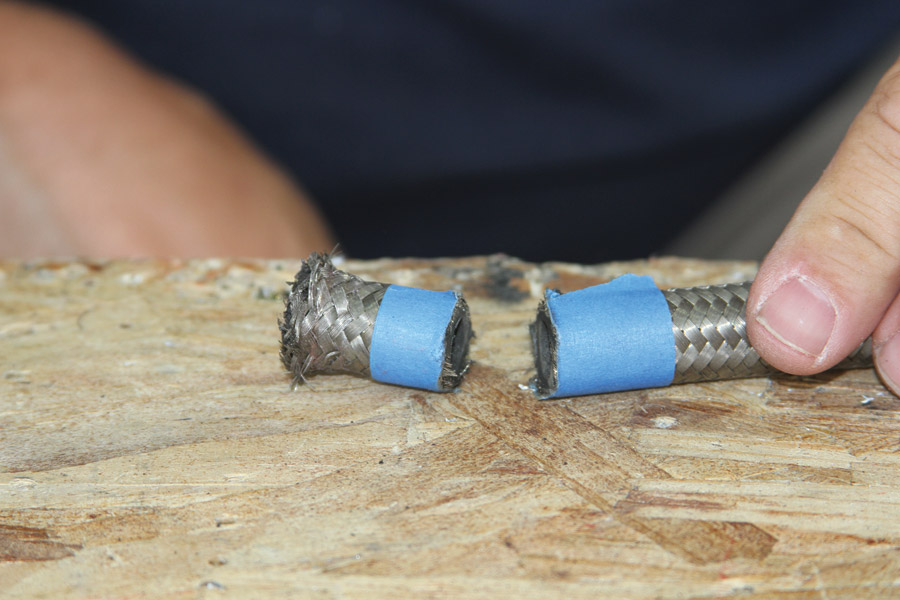 Wrapping the hose in tape before cutting will ensure nice captive edges.

Note that the Aeroquip ACP fitting breaks down into two parts—the socket and the nipple. The nipple has the captive nut (usually blue) and unscrews from the socket. The socket will slide over the outside of the hose braid, and the nipple will then slip inside the rubber liner and screw into the internal threads of the socket. As they draw down on each other, the hose will be tightly wedged between the two, forming the firm connection.

The socket needs to be inserted over the end of the hose, and while this can be done carefully without any special tooling, a clever little funnel box is available from KOULtools to make the job precise and very simple. Whichever way you choose, remove the tape from the squared end of the hose carefully so as not to disturb any of the braids. If you’re doing it without the special tool, carefully insert the hose into the end of the socket without catching any of the braid wires outside of the bore. Slide the hose in until it bumps up against the end of the threads (look into the other end to gauge how to do this). 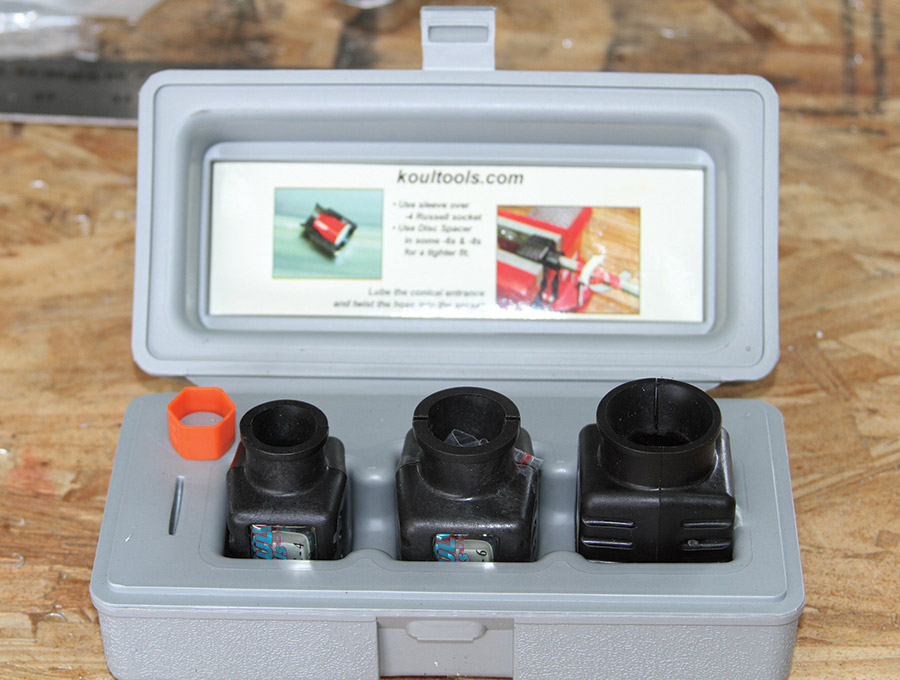 The KOULtools assembly blocks are a quick way to insert the braided metal sheath into the fitting without splaying the sheath. You can do the job without them, but if making multiple hoses, it is worth it.

If you’re using the KOULtool, place the fitting in the tool, add the end spacer if necessary, then snap the other half of the tool in place. Place the tool in your bench vise to hold the halves together, and then slide the hose into the funnel opening on the end. The funnel guides all of the braid directly into the socket, allowing you to quickly insert and set it as before. It is hard to justify the tool if you’re only going to make one or two hose ends—but if you expect to make a lot, this is a real time-saver.

Once the hose is fully inserted in the socket, take another piece of masking tape and carefully wrap it around the hose right at the base of the socket. This is going to be used to tell if the hose has backed out of the socket when the nipple is inserted, so be precise. Alternatively, you can simply draw a line with a Sharpie on the braid. I like the tape because it leaves no marks after the job is done. Insert the socket in your bench vise with the open end up and the hose hanging straight down. Use jaw protectors to keep from marring the socket. 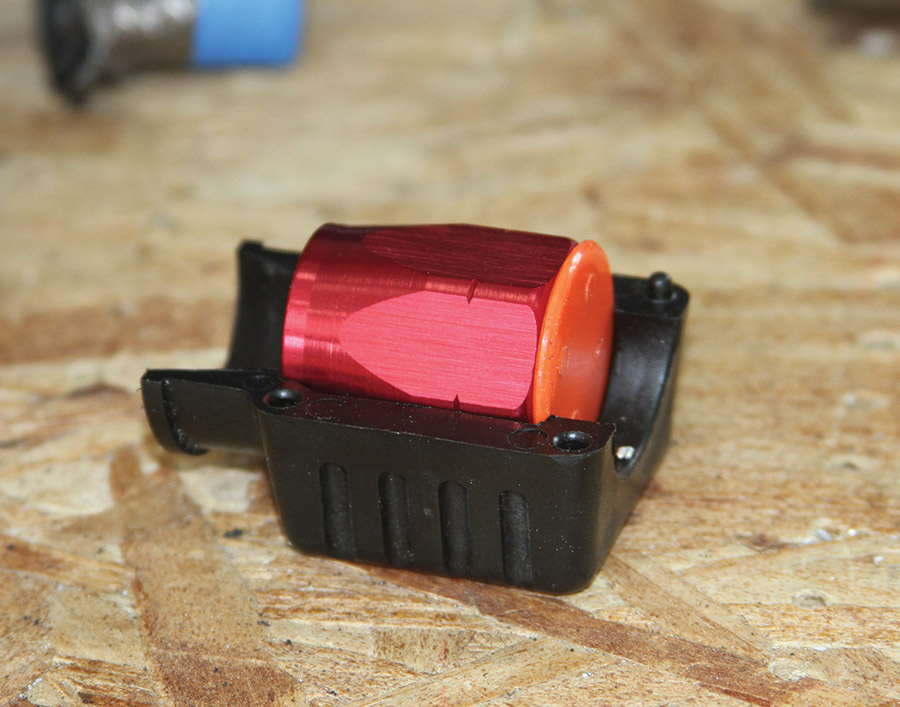 The Aeroquip fitting is inserted into the KOULtools box and a spacer added to make it snug. 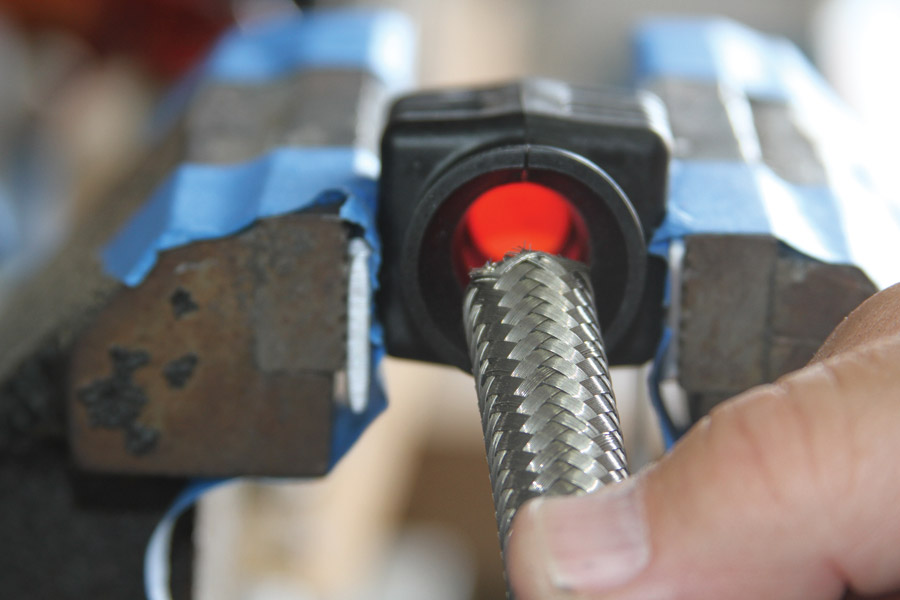 With the KOULtools box in the vise, you simply push and twist the hose end into the fitting. 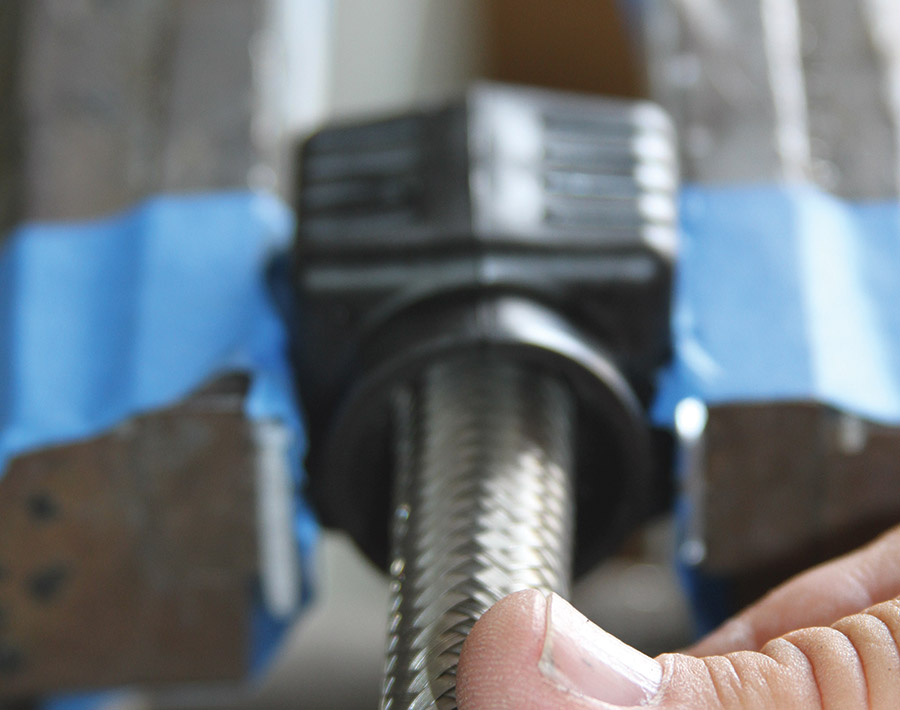 When the hose stops moving into the fitting, it has probably bottomed out in the correct spot. 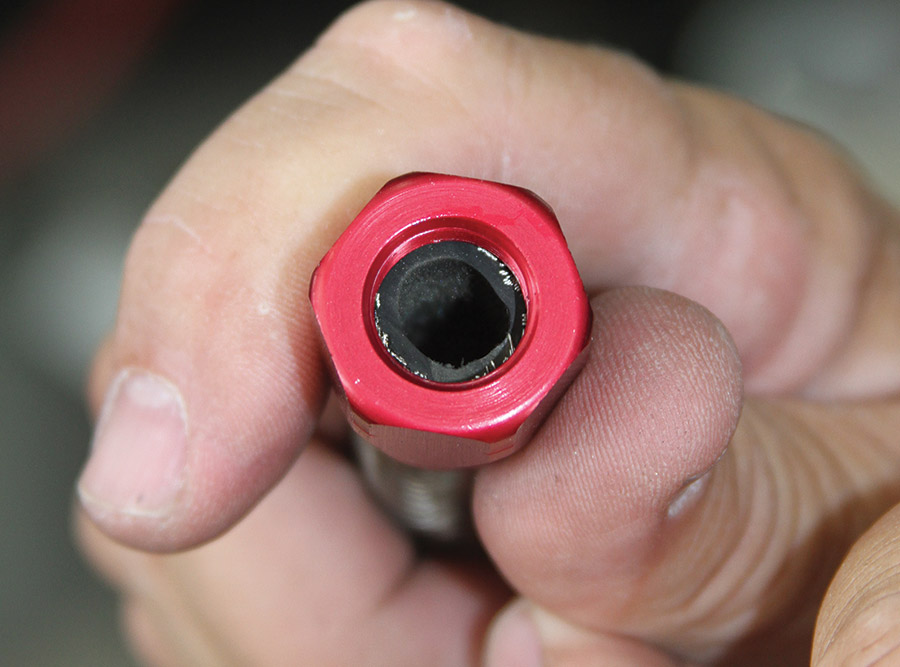 A look into the end of the fitting confirms that the hose is fully inserted. 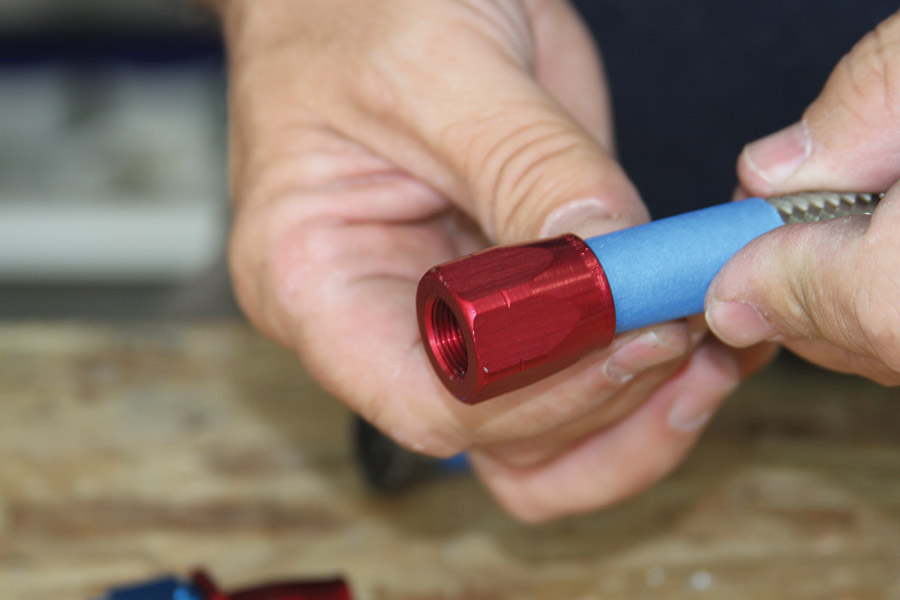 Before assembling the fitting, wrap a piece of tape tightly against the back side—this will tell you if you have pushed the hose out of the red part of the fitting during assembly. 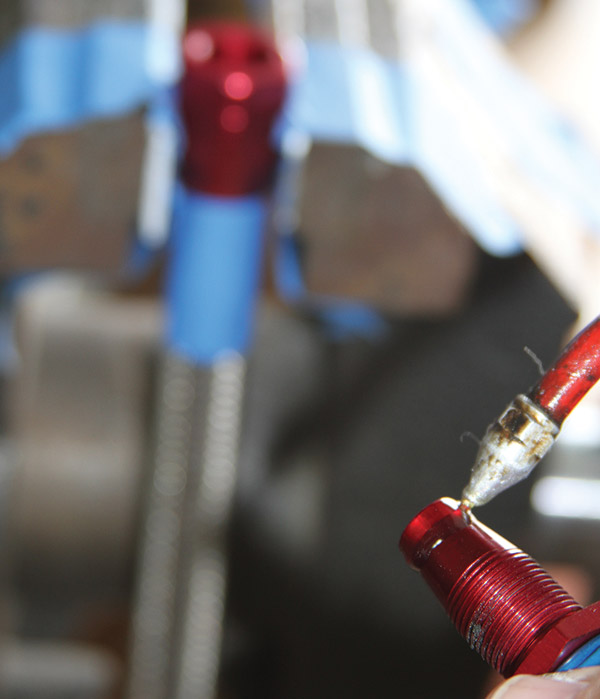 A tiny bit of oil will help the fitting slide smoothly into the hose. 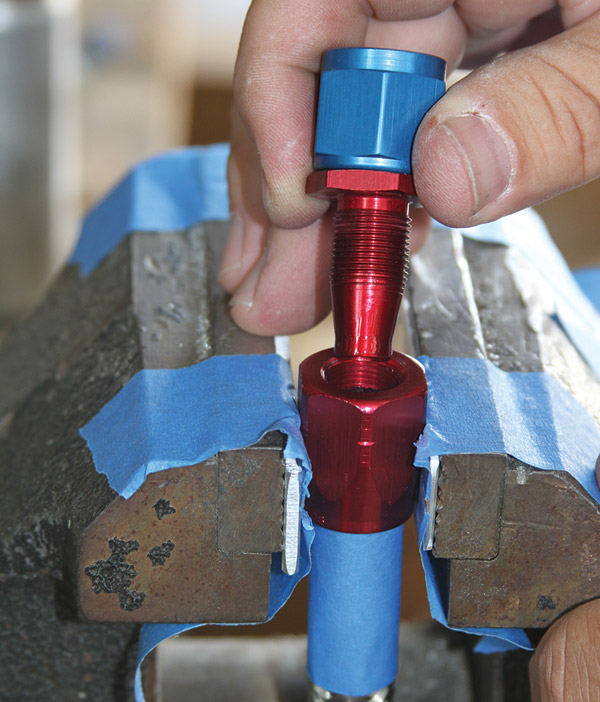 With the red ferrule clamped in a vise, carefully insert the rest of the fitting into the hose.

Now take the nipple and apply a little lubricant. I simply use motor oil, but Aeroquip does sell an oil labeled for the task. Apply the lube to the end of the nipple that will be inserted into the rubber liner of the hose, then carefully start it into the liner with a rocking motion to make sure you don’t catch or fold an edge. I find that it usually makes a soft “pop” when it starts properly. The threads on the nipple should come in contact with the threads on the socket and be ready to engage. Twist the nipple by hand to start the threads and make sure that they aren’t crossed. 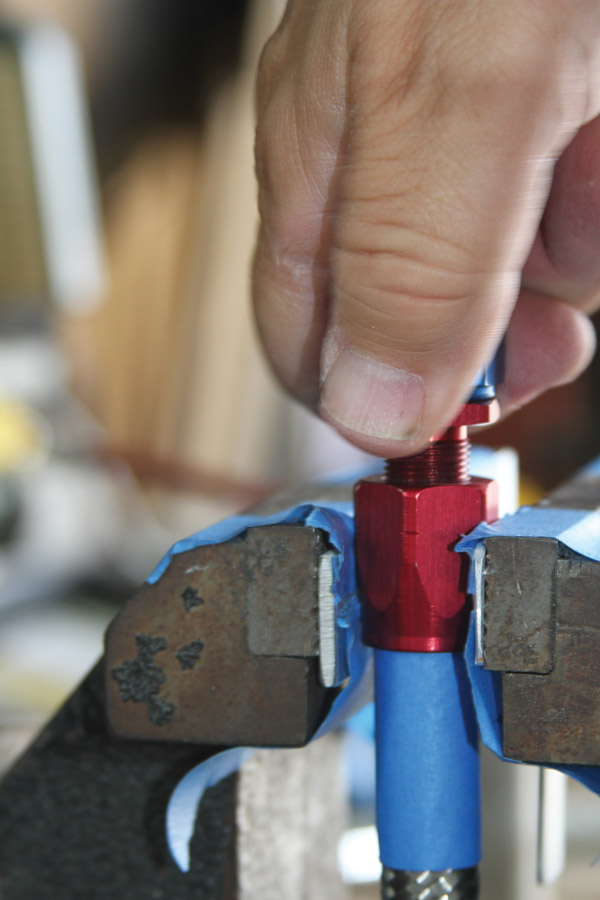 Screw the fitting together by hand as far as you can to ensure that it has started without cross-threading.

Tighten the nipple with the appropriate sized wrench; for a -8 fitting, this will be a 7/8-inch box wrench. I suggest using the box end rather than the open end to securely capture the fitting. You’ll need to turn the nut portion until it lines up with the thin threaded section of the nipple, then you’ll be able to screw it fully into the socket. You don’t need to tighten it fully—you can leave a slight gap—no more than 0.031 inch. I usually use a piece of .025-inch aluminum as a feeler gauge to make sure I am within limits. I also like to line up the flats on the nipple with those on the socket, just for appearances. Check the piece of tape you wrapped around the hose at the base of the socket and make sure that you haven’t pushed the hose out of the socket while inserting the nipple. 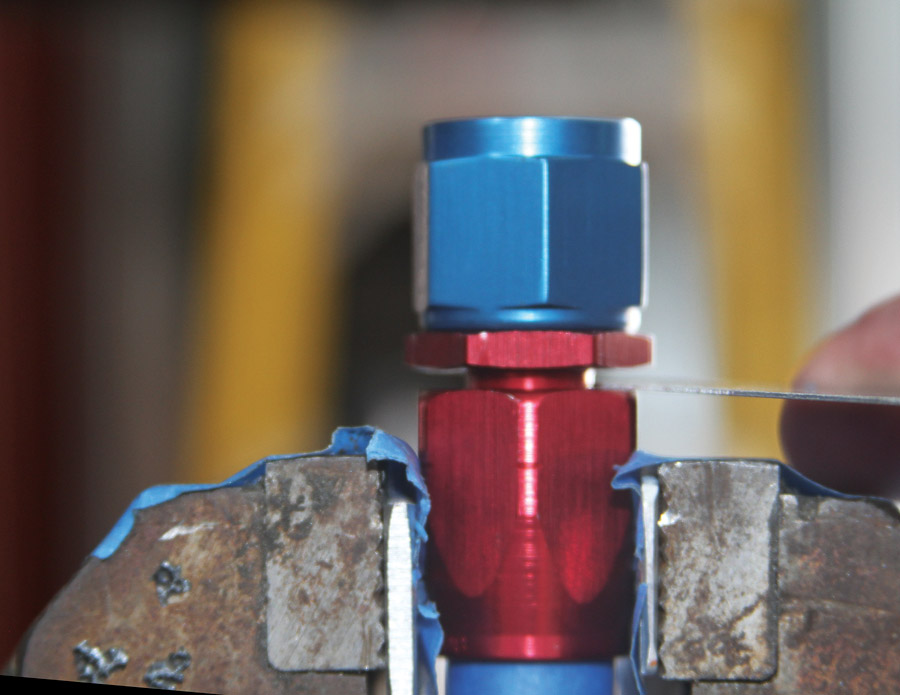 Use a combination wrench to tighten down the nipple until you get close to the required clearance. 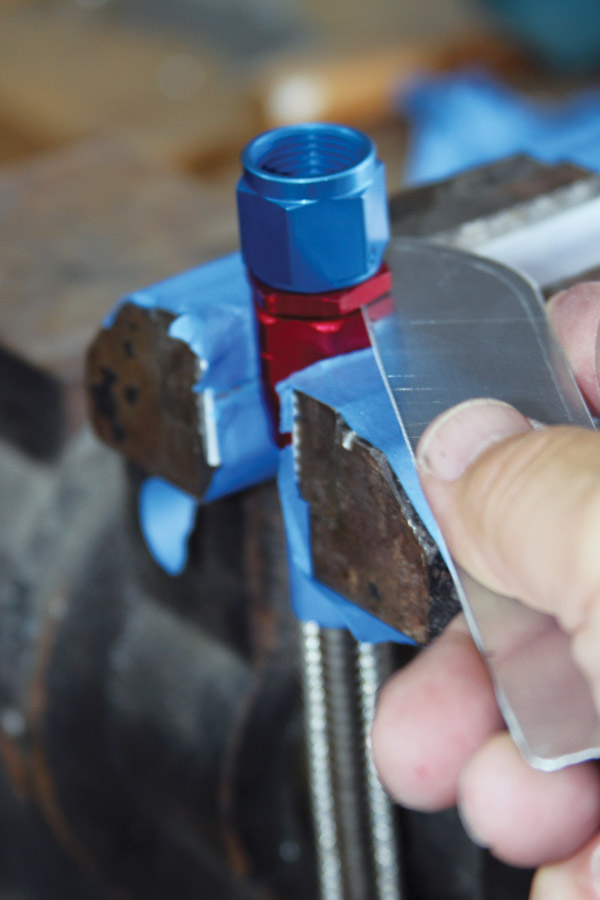 Use a piece of aluminum or a regular feeler gauge to check the clearance between the nipple and the ferrule, then tighten until it is in the required range.

Voil—one end is now complete! Take out your piece of poly line and measure for where to put the tape to cut and square off the next end. Note that the end of the nipple is actually about inch from the hose end of the captive nut, so measure from that point on the completed end to the end of your template. Measure the offset from there to the inside edge of the socket to find where to cut the hose, then use your cutting wheel to make the hose the correct length.

Repeat the process of installation for the second end and check the length with your template; hopefully, you’ve measured the offset correctly and it will be perfect. Grab an air line and blow the hose out—you want to clean out any debris from cutting or that was in the raw stock. Hold the hose up to a light source, stretching it out straight, and make sure that there are no obstructions visible. It is not unheard of for the nipple to slice a small flake off the side of the rubber during installation, and this creates a little blockage or flapper valve that can impede fluid flow. The hose assembly is now complete and ready for testing. 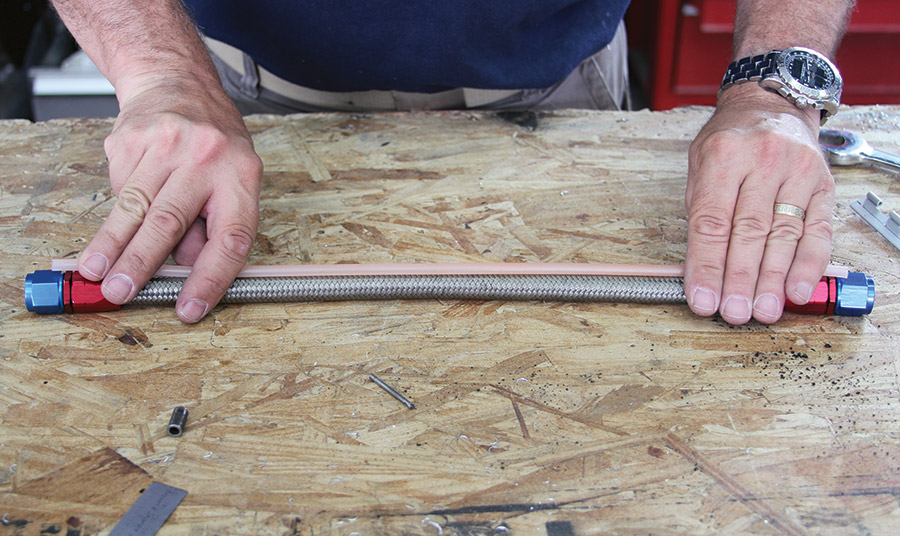 The finished hose is exactly the length determined by the mock-up.

It is a very good idea to pressure test your hoses, even though most oil lines will rarely see more than 100 psi. Testing can be done with a hydraulic jacking tool that has been modified with a gauge and the appropriate AN fitting to connect to the hose. Fill the hose with oil or hydraulic fluid, attach to the jack cylinder, and pump up the pressure. Standard procedure is to use twice the expected working pressure. There should be no creeping or leaks. Check the tapes you put up against the sockets before screwing in the nipples, and make sure they did not back away from the base of the socket. 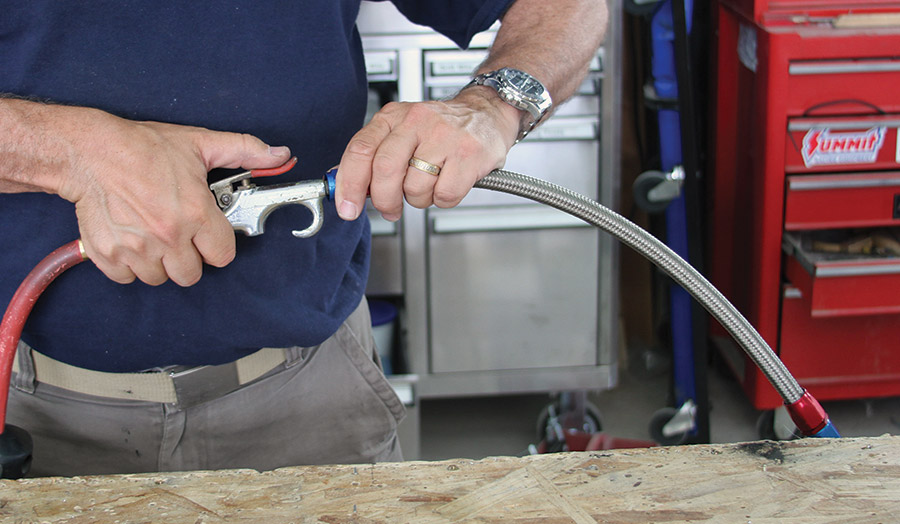 When both ends are finished, blow compressed air through the tube to make sure you have not left chips or residue.

The last thing you should consider is covering the hose with firesleeve if it is going to be exposed in the engine compartment. Firesleeve is available from the usual vendors for aircraft hose building, along with the necessary clamps to finish off each end. 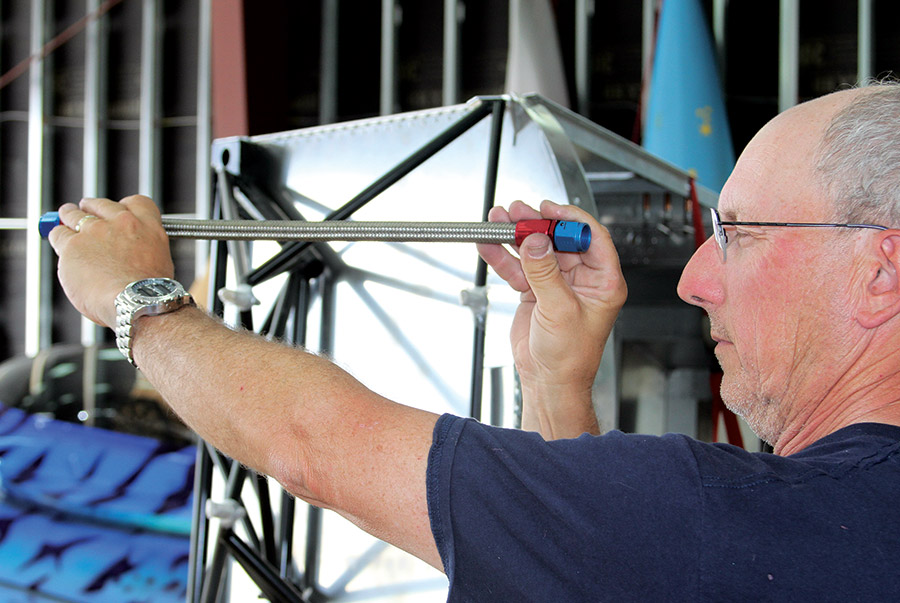 It is important to visually check the hose to make sure that there is no flap of rubber cut by inserting the nipple at either end.

Making your own fluid lines is really pretty easy, so long as you buy hose and ends that are compatible, and you buy the types of fittings (such as Aeroquip ACP) that are installable without special dies. Doing them yourself ensures that they are the correct length to route exactly the way you want them. And using reusable ends also makes it easy when it comes time to replace the hose—just buy a length of hose and remake the assembly. While hoses can be ordered in any length, it gives a certain satisfaction to build them yourself—especially when it really isn’t that hard or complicated.

Metal Magic: How To Back Rivet