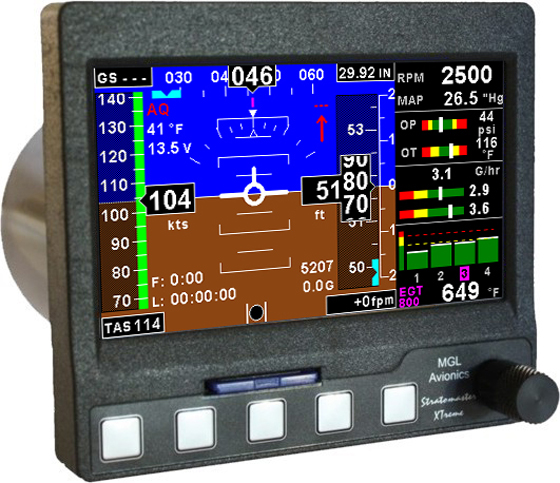 After several years of development, MGL Avionics has announced its XTreme mini EFIS, a functional primary flight display (PFD), engine monitor, fuel computer and basic GPS built into a compact package. It mounts in a standard round 3.125-inch hole (offset) and boasts a bright 4.3-inch diagonal sunlight-readable display (the same size and resolution as the Garmin aera and BendixKing Av8or GPSs), according to MGL.

The XTreme can be used as a PFD or PFD/engine monitor, depending on the application. It can also be used as primary instrumentation or as a backup gauge to a large EFIS. The XTreme includes a built-in GPS that is used for ground speed, range calculations and as a backup/control to the AHRS and will soon include a basic GPS navigator via a free software update. Direct To and Basic Route navigation will be supported (though there’s no moving map). Full two-axis autopilot functionality will be included in a free software update later this year (add MGL Avionics CAN servos at $1000 each).

The basic unit has been introduced at a special price of $1000, and includes the built-in GPS and antenna. For a full AHRS package, add another $1260. Without the attitude sensor the XTreme will still display a GPS-derived bank angle (no pitch information), so it can be used without AHRS sensors if necessary. For engine monitoring, an RDAC (remote data acquisition computer) must be added (starting at $160) along with a full complement of engine and fuel sensors.

Dave Martin - March 18, 2011
0
Now in its seventh year, the Light Sport Aircraft Expo, which gathers enthusiasts together each spring in Sebring, Florida, is still going strong. By Dave Martin.