Several new EFIS models and upgrades have been introduced at the show today. 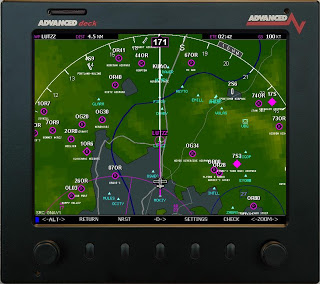 For fans of the EFIS, the talk of the show so far has been Advanced Flight’s new EFIS, called the Advanced deck. This unit is in addition to the AF-3400 and AF-3500 models already shipping. The Advanced deck features a new tray mounting system, an additional front knob/joystick, a faster processor than the 3400/3500 units, 16 times more memory capacity, and a host of new features. The 8.4-inch diagonal display is the same size as the 3500, but the bezel now includes two knobs, including one that has a four-way “joystick” control. I stopped by the Advanced Flight booth, muscled up to the front to find Rob Hickman and Relentless pilot Kevin Eldredge chatting about the new product. In a word, it looks superb. The screen is bright, and the new mapping (actually shown last year) is slick. I particularly like Rob’s new tape implementations. 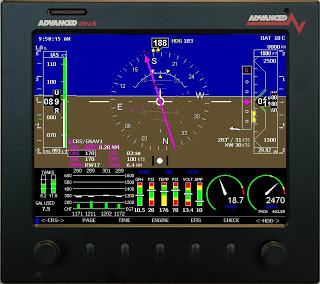 This unit can be ordered, like the others, as an EFIS, engine monitor or combined unit. Prices start at $4465 for the engine monitor, up to $6793 for the combined EFIS/engine monitor. Other versions are available.

Also garnering a lot of interest was an upgrade to Grand Rapids’ new high-resolution EFIS called the HX that provides 3D terrain awareness. Using the same box and wiring connections as the HS, this new iteration has a substantially stronger processor and more internal memory. I spoke with GRT’s Greg Toman, who commented on the fast movement in computer technology. “We have [system] vendors come to us all the time with better, faster processors,” he said. The new HX will be a $2400 upgrade from an HS or WS Horizon EFIS, or $4000 if you’re starting fresh.

Grand Rapids offers an almost bewildering array of options, including an internal GPS (RAIM or no), XM WX onboard weather, plus engine monitoring in the form of the EIS module, which is fully compatible with the new HX EFIS. We don’t have a photo yet, but here’s a link to a PDF brochure. We hope to have a video run-through of the HX’s features later in the week.

Testing is taking place now; deliveries are expected this summer.

Technically, this is not a new EFIS, but Dynon’s new autopilot will be tied directly to its EFIS-D100 or D10A, or FlightDEK-D180. For $750 an axis, you add just the servos to the EFIS to get yourself an autopilot. Two external control boxes will be offered; the AP74 ($450) provides dedicated buttons and a value knob that will also set bugs even when the autopilot isn’t engaged. A second module, the AP76 ($1400), will be offered later in the year.

I spoke at length with the Dynon engineers at the show, and many of the features are still being discussed internally. So far, the autopilot is being flown in a handful of airplanes, and the company is aggressively developing new installations. In fact, I’m due to be a beta tester for the Glastar Sportsman installation.

Dynon’s approach is interesting. Rather than sending a big bundle of wires to the stepper-motor servos, the system uses the Dynon Smart Avionics Bus (DSAB), a two-wire networking setup, to manage each servo, which will fit exactly into a TruTrak footprint. Add power, ground and an interrupt wire, and that’s all the servos need to perform. The outboard control modules are also optional, as all functions will be available from a standard D100/D10A/D180 with a software upgrade.

Navigation sources include GPS and VOR/LOC from a Garmin SL 30. If the installation has an HS-34 external ARINC module, the autopilot will follow those commands as well as (in a future version) vertical and lateral steering commands from a WAAS-approved GPS.

Marc Cook - November 18, 2008
0
The Editor-in-Chief discusses how the improper cut of his instrument panel affected the performance of his Dynon autopilot; by Marc Cook.