In my tramps around the AirVenture grounds over the years, I have side swiped KidVenture on multiple occasions. Decades ago, KidVenture was a small corner of a hangar near the brown arch where kids could assemble a full-sized wing rib to take home and put on the wall. Sure, I saw he program grow over the years, but I had no idea of its current scope until today.

From the moment my grandsons Jackson and Davis hit the property, they said they wanted to visit KidVenture. All they knew about it were the signs and the catchy name. My son Drew and I put them off until today, which we said would be devoted to their attendance. This morning, we arrived early at the KidVenture grounds, behind the Museum and the Pioneer Filed grass runway. I was floored by the breadth and factual attention to detail of the KidVenture phenomenon. The concept is simple. Kids are given twenty four different stations for sampling the world of aviation. They can construct a (now scaled down) wing rib, rivet a neat looking name badge, build and launch a foot long rocket, fly a drone, build a model or experience numerous other adventures.

Our first station was to view videos about the Tuskegee Airmen and the women WASP pilots of World War II. The historical message was incredibly inspiring. Even those who are marginalized with the preconception that they have nothing to offer can, by sheer force of will and patriotism, achieve great things. Kids can know that feeling.

Next, I accompanied Davis to the riveting station, where a lady dressed as Rosie the riveter showed him how to drive rivets with a full-size rivet gun and bucking bar. Another volunteer guided Jackson in shaping and sanding a wooden propeller. Next, the boys went to the rocket construction station, where a man with a Boeing name tag looked them straight in the eye and said, we are going to build a rocket. Proper rockets were constructed from cardboard tubes and construction paper fins. Then, the boys went to a launch facility outside where they used compressed air to launch them to an impressive altitude.

I was awestruck by the sheer number of volunteers and the one-on-one connections they made with each child. Whether it was a five-year-old or a teen, each volunteer would look each child directly in the eye and connect. They not only showed them how to perform each task, they explained the reason for the task and the science behind it. These weren’t adults instructing kids. These were beautiful human beings engaged in an act of love towards their fellow, but smaller human beings. For the short 15 to 20 minutes they spent with each child, they transferred the precious spark of the love of flight and adventure.

They boys ended their KidVenture day with a simulated launch in a full scale mockup of a NASA Gemini capsule. They clambered into the capsule seats, with their heels in the air and the volunteer shut the hatch. The simulation included recorded messages from Launch Control, switches with real lights and gauges and a launch soundtrack. As the count reached zero, another volunteer pumped a lever which vibrated the capsule to simulate the feeling of rocket motors on the structure. I spoke to one of the volunteers and he admitted that he built the whole thing, just for this use. I could see the pride in his face when he said, “It’s exactly to scale.” 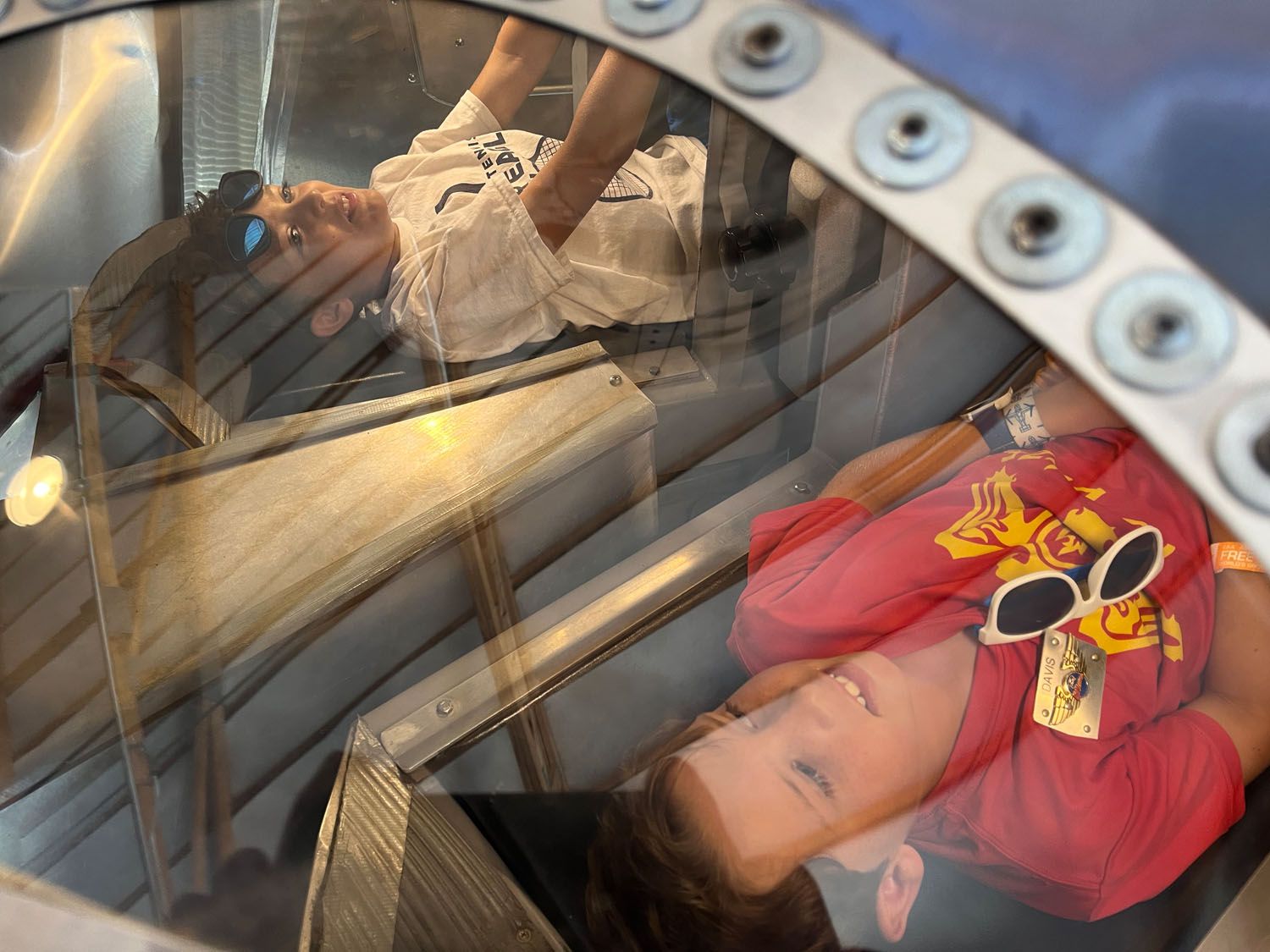 The KidVenture hangars are hot. The lines of kids are long. The hours are taxing. But I saw no complaints. All I saw were proud and impressed parents, energized and engaged kids, and a legion of volunteers who know he true meaning of love.

Sadly, I packed my wonderful son and precious grandsons off to Milwaukee, to fly home to Atlanta today. They were clutching props, riveted name tags and paper rockets.

Dave Prizio - July 27, 2012
1
Author Dave Prizio describes construction of the firewall itself, including the penetrations and the tools required.