Walking through the Homebuilt Camping area at AirVenture is always a sensory overload for kit builders. Whatever you are building, or hoping to build, there will be more flying examples of that aircraft than anywhere else on earth. For RV-4 builders, there is an oasis of 4s on the HBC grounds. Literally.

Amidst a knot of RV-4s rises a six-foot neon plastic palm tree, with lights. It is safe to say that this is the only palm tree, dead or alive, that you will find in this part of Wisconsin. Of course, there is a story behind the electric palm. It is the story of Justin Von Linsowe and Devin Albrecht.

Both Justin and Devin were members of an RV-4 Facebook group and, coincidentally, both posted similar pictures documenting their panel carnage on the same day. Messages were exchanged, and the history of their lives took the same fork in the road. After a considerable amount of internet collaboration, they finished their panels, and decided to attend Sun ‘n Fun together in 2018. Camping together further cemented their RV bond and they have attended scores of flyins together since then. They have camped together at Sun ‘n Fun, AirVenture and Petit Jean flyins. They have flown the Hudson River Corridor together and camped out on the Outer Banks of North Carolina in their RVs.

Not content with just camping together, Justin and Devin have coalesced other RV-4 drivers into their pack. They linked up with a RV-4 pilot who happened to be the airport manager at the Boscobel airport in Grand County, Wisconsin (KOVS) and they organized a pre OSH Warmup the weekend prior to AirVenture. The weekend is filled with formation flying, balloon busting, spot landing and an epic cookout. This has been going on for several years now and is destined to be an obligatory RV-04 event.

Now, Justin lives in Conyers, Georgia and Devin Lives in a suburb of Milwaukee. Devin states, “We fly together more than most and distance between us has never prevented that.” Well said.

The electric palm tree is more than an eye catching decoration. It is a monument to friendship and the brotherhood of flight. 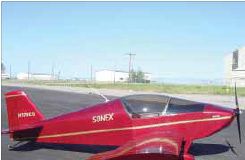