Home Magazine Exploring On Getting Dark

One recollection was after a late in the day winter’s training session when he was filling out my logbook. Explaining out loud as his pen scrolled through the little black book’s columns he said, “That was point seven daylight and three tenths night.” The ground school instructor, a sweet but by-the-book wheelchair-bound woman who doubled as the mom-and-pa school’s secretary and an often unwitting bit of mica between the boss’s cathode and the boss’s wife/business manager anode overheard his remarks and countered, “You know, Harry, it isn’t officially night until a half hour…” which is when the boss-instructor raised up his head and his voice and in a conversation-ending flatness declared, “I’m the boy’s instructor and if I say it was night, it was night.”

And there the matter will lie for eternity as they’re both gone now, but more importantly, Harry said it was night.

Which brings me to a far more recent occurrence, in fact, one we can label downright contemporary when allowing for publishing deadlines. I had taken the old box kite about 40 minutes north to check in on a bit of KITPLANES® business. This was deep into December, so the days were aggressively truncated and holiday visitations an enjoyable part of the proceedings. We made the rounds in the shop, then retired to the office to peruse the latest bits of hard- and software.

Now, this office being interior to the hangar, is a windowless bureaucracy where time runs unmarked, and when I thought to consider just how long I’d been visiting and how short the days were, I knew I was in trouble. The sun was long over the yardarm and plummeting to the horizon; worse yet an overcast had solidified, making sure any residual light left trailing over the horizon would make a beautiful scene atop the clouds for those airline pilots superior to the stratus, but hasten the gloom to we underlings below it. And I would most assuredly be flying below it.

Bidding a hasty goodbye and equally rapid engine start, run-up and takeoff, I circled the Starduster to above the nearby Class C airspace and set a heading for home. Trading gasoline for time, I let the 540 up front thrum at its favorite spot: 24 square and a bit over 18 gallons an hour, but all those wings and wires ensured we weren’t going that fast—that is, fast enough to get to the home drome before the sun had completely left the scene.

Now, I’d landed the Starduster deep into the dusk maybe three times in the preceding 20 years, and each time I’ve sworn I wouldn’t do it again. But there I was, victim of my own gabbiness and failure to manage time, losing another race with the sun. The only real difference was I was older and still just as dumb, and it was going to be darker than ever. 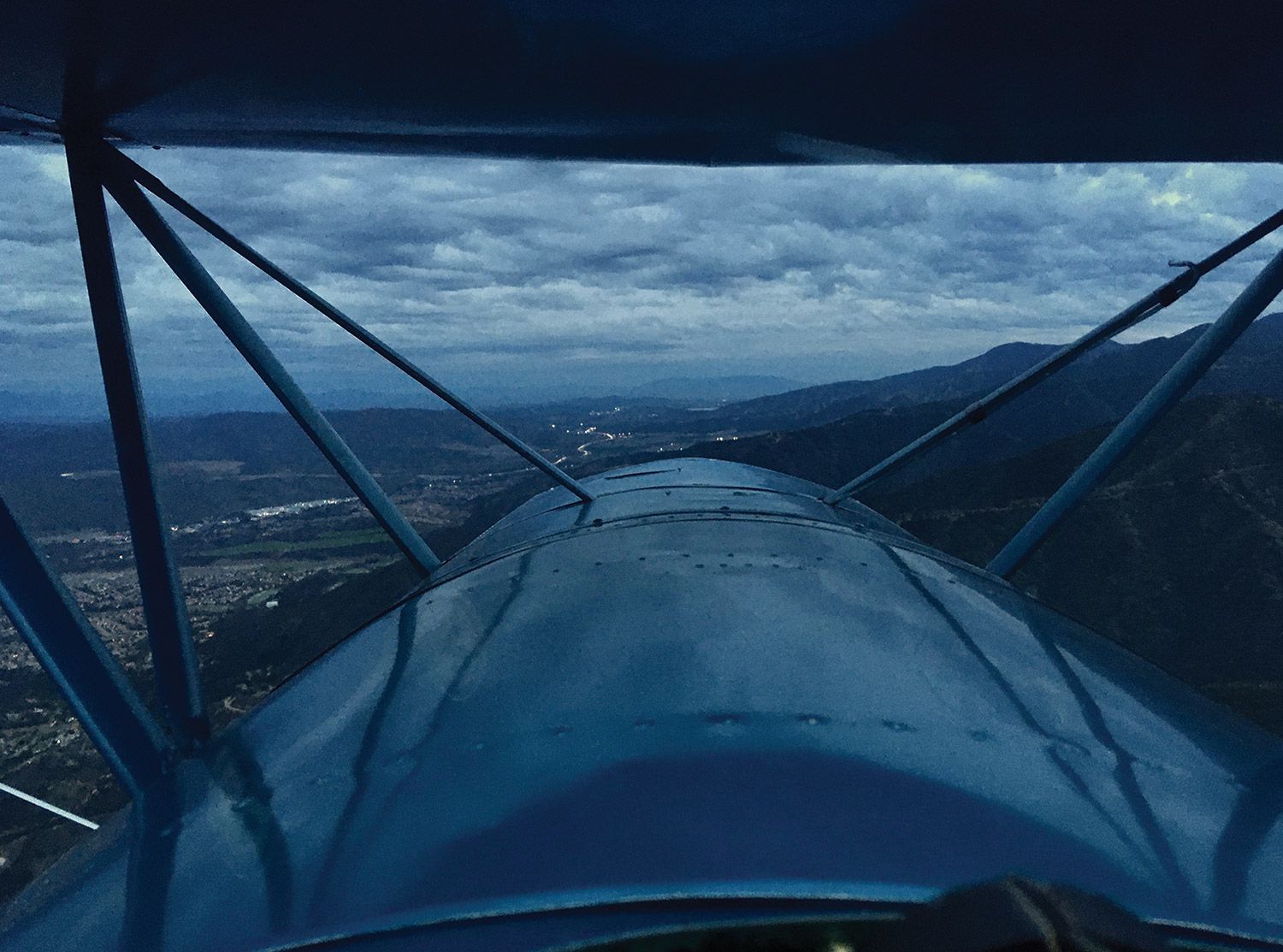 Sitting there alternately considering the irrefutability of my shortcomings and the equally inexorable advance of darkness, I set aside stomach-gnawing long enough to consider the beauty of the transitional hour. It’s a time when I don’t fly much, at least not far from the home traffic pattern, and then in different aircraft. And thus it’s a period of both high interest and intrinsic beauty; the headlights below were crawling in rivers through the Southern California valleys while above the clouds projected a beauty that comes with the combination of something simultaneously so shapely yet dangerous. Pawing one-handed at the flight jacket’s pocket, I retrieved the cellphone and managed the photo you see to the left. You have to admit, no matter how un-aerodynamic a biplane’s structure, it frames the world wonderfully.

Home was recognized from afar by the rotating beacon, and I set up for an overhead approach to the 2180-foot strip. There was some light pollution from the nearby downtown, the dull glow of my instrument lights and just a reminder of a sunset in the clouds far to the west. It was about 25 minutes after sunset and I’m telling you, it was night. This was especially true due to the thick overcast, the huge, dark military base immediately west of the airport and most importantly, because I was there.

Landing the hose-nosed Starduster is always a procession of disappearing acts; the closer you get to the runway the more the outside world disappears. But at night with no landing light, so much more turns to black that much sooner and many of the little clues one takes for granted in daylight simply aren’t there. There’s no rotation of shadows across the wings to reinforce the idea you’re turning, for example, and the sense of speed given by increasingly blurred peripheral vision when close to the weeds is replaced by a giant, implacable inkiness, a void where the familiar has gone missing and the imagination goes blank trying to replace it.

Of course, there was a slow trainer working the pattern, probably the only one that week, and fitting in behind him put me lower and dragging it in more than I would have otherwise chosen. But by happy providence this forced me into a final approach with a bit of a left slip for “visibility” around the cowling and a hair of power-on to control how downrange the now ballistic-feeling biplane would go before impact.

Blessedly—and this has proven a large mitigating factor when flying while most birds roost—there was not a breath of wind. The Starduster would thus glide down whatever rails I set it on and with a promise to float straight down the runway with no drift, other than the one I would inadvertently induce in my visual ignorance. I resolved to not move unless necessary.

The lights of town winked out behind me as base turned to final, my world reduced to the left-most green approach light at the runway’s end and the first white light at the runway’s left edge; and like a navy pilot trapping on the boat at night, it was all I needed. By keeping the green and white lights coming straight at me, I knew I wasn’t under- or over-shooting the touchdown point, and as the lights grew farther apart I knew I was getting closer. By how fast and then faster they began to spread, I knew how much quicker I was getting to the runway, and then they disappeared under the lower wing just as I was pulling off what little power remained. I had to be over the runway and the stick came back into the flare.

Nothing. And then still nothing. Just darkness, save for the instruments glowing and then a growing quiet as the wind roar went to a murmur, a sense of precious lift bleeding away into the night as the quiet grew. She’s really slowing…

Bump! Stick forward! And the nose drops to reveal an almost blinding array of runway lights perfectly centered along both sides of the nine feet of cowling before me. Keep pushing the tail up to see, oh so gently squeeze the brakes as with no wind she won’t stop in time on her own. Finally, the elevators can’t lift anymore, the tail settles, darkness regains its strength and the tailwheel slowly rolls. Yes, much darkness again, but the familiar sort of darkness of a man shuffling across his living room to the light switch.

Don’t do that again any time soon…but it was sort of neat. Landing lights for sure on the next build.