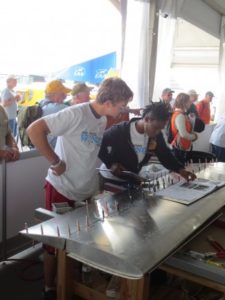 The “One Week Wonder” project to build and conduct initial taxi testing of a Zenith CH 750 kit airplane in seven days–right in the heart of AirVenture 2014–was a hive of activity as of 8:00 a.m. on Tuesday. Speaking amid the classic clatter and howls of tools in action on an aluminum airplane, Charlie Becker, EAA’s manager of homebuilt programs, told us that he was satisfied with the first day’s work of the large group of volunteers assigned to the stations building various components. “The fuselage is on schedule, as is the right wing. The tail is ahead of schedule. Only the forward fuselage is behind, but only by about four hours, which is not a concern at this point. In fact, we knocked off work at 5:30 p.m., yesterday. We didn’t feel it was necessary to work into the evening,” he said.

Volunteers from all over are working to build the Zenith CH 750, drawn by the excitement and their personal passion for aviation. The team working on the tail this morning appeared to be the youngest of the teams and included Patricia Nyekobzi, a flight instructor and maintenance technician in Ghana–and the only woman certified by Rotax for work on its engines–who was directing volunteers Michael Long, of Weyauwega, Wisconsin, Sophia Shay of Annandale, New Jersey and Gwendolyn Herman of Bethlehem, Pennsylvania. Ms. Shay told us that she and her father had heard about the project and had gone through EAA training in assembling kit aircraft before coming to Oshkosh for the “One Week Wonder” project. AVweb will be checking in daily to report on the progress of the Zenith CH 750.