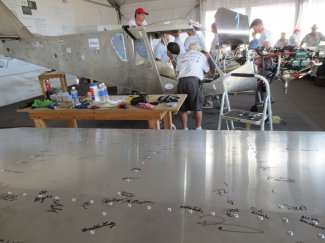 Each morning this week we have started our day by going directly to the One Week Wonder pavilion at the crossroads of all that is AirVenture 2014. The team of volunteers is still on schedule to completely assemble and taxi test a Zenith CH 750 during the convention, which means by the end of the day, tomorrow. Ron Wagner, of Slippery Rock, Pennsylvania, the number two on the project, told us that Charlie Becker, EAA’s manager of homebuilt programs and lead on the project, was doing an important part of the assembly of a kit airplane at the time we visited–he was working on the paperwork so that an Airworthiness Certificate could be issued once assembly and testing is complete. Wagner said that the wings will be installed shortly as they are complete save for some plumbing that must be done when on the airplane; the rudder and elevator controls are rigged, fuel flow is being tested, seat panels and upholstery will be installed soon and they are preparing to do the weighing and calculations for the weight and balance of the airplane.

Due to the amount of space available within the fuselage to work, the number of volunteers is down from the crowds that characterized early assembly. Wagner said that this is the third or fourth time an airplane has been built during AirVenture, but it’s the first time that it isn’t being done purely with a team of experienced, expert homebuilders. During wing and fuselage assembly, anyone could get trained on pulling blind rivets, then pull one on the airplane–and sign the aluminum beside the rivet. As Wagner said, this is truly an amateur-built airplane. We were told there are over 2200 signatures on the airplane and in the world’s largest builder’s logbook that is documenting the construction–including FAA Administrator Michael Huerta, who got involved and pulled a rivet. The photo above shows a number of the signatures of the volunteers who pulled rivets on one wing and the current crew of volunteers working inside the fuselage.

Barnaby Wainfan - January 12, 2020
2
At this point in the design process, we have gotten the airplane sized, balanced,...