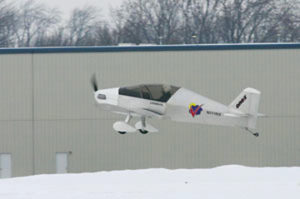 Sonex Aircraft, LLC has announced that the number one prototype of its new Onex single-place, folding-wing kit aircraft made its first flight on January 27 at Wittman Regional Airport in Oshkosh, Wisconsin. Piloted by Sonex General Manager, CEO and Onex designer Jeremy Monnett, the AeroVee-powered N111NX made an extensive flight, orbiting the field. Monnett also made a low approach before landing, signifying his satisfaction with the initial handling and performance of the aircraft, the company says.

“The airplane is sweet,” said Monnett upon landing. “It feels great!” In celebration of the achievement, the “Corsair-style” wing-fold system was employed before stowing the aircraft back into the Hornets Nest R&D hangar.

Next steps in the development of the Onex include a complete and thorough flight testing program to explore the full performance envelope and flight characteristics of the aircraft, along with completion, first flight and testing of Onex prototype number two, a trigear version.

More information about the Onex can be obtained by watching an upcoming Onex webinar to be hosted by EAA and presented by Monnett on February 2 at 7 p.m. Central time. For more information and to sign up for continuing updates, visit www.SonexAircraft.com.

Kitfox with a Rotec

Marc Cook - January 7, 2011
2
The Rotec-radial-powered Kitfox Super Sport taps into our nostalgia for radial engines but with a modern touch.

All About Avionics: Cutting The Metal

Stein Bruch - July 19, 2008
0
Heres something to ponder: By the time you get to the point where you are ready to build the panel in your homebuilt aircraft, you've already mastered many of the skills and techniques you'll need to do it by virtue of completing the airframe. That statement is all the more credible when it comes from someone with a vested interest in the subject, our own avionics expert Stein Bruch.