Definition of a marriage made in heaven: a Garmin GPSMAP 396 or 496 snapped into an AirGizmos mount in a panel too small-or by a builder too frugal-to accommodate anything else. Peek into any homebuilt at Oshkosh, and you’re likely to see an x96 unit bolted in place acting as either primary or backup navigation. This was true before the 396, but especially so after, as pilots who venture out of the pattern found in-flight weather (from WxWorx through the XM link) impossible to resist.

The x96 platform (except for the 696), while good, wasn’t perfect. In fact, one third of the navigators footprint is occupied by buttons and keys, at the expense of screen size. Garmin’s new aera line of touchscreen navigators addresses this issue, and soon AirGizmos will be close to shipping a panel mount cradle for the line, if it hasnt already. The aera represents an improvement over the x96 line, though the difference may not be such a slam dunk as to merit an immediate upgrade if you already have a 396-size hole in the panel. But the new navigators are easier and faster to operate, have a larger screen and offer an impressive list of capabilities.

Garmin is hardly a stranger to touchscreen capability, given that its 27-model nuvi ground navigator line is entirely touchscreen driven. The aeras-available in four models-are leveraged from another terrestrial GPS product for motorcycles, the zumo. The basic hardware for all four is similar and consists of a 5.2×3.25-inch chassis thats 1 inch deep. That makes it more compact and with a better aspect ratio than the x96s have, with a slightly horizontal landscape shape. 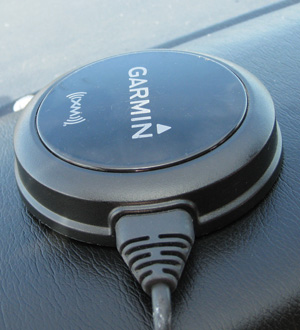 While the XM puck antenna looks similar to the 396/496s, its only the antenna element. The XM receiver itself is inside the aera.

There are two jacks on the right bezel edge for external antenna and audio output, and a series of pin contacts on the back for data, XM antenna feed and power. The only hard button is on the top of the bezel-a push control for power on/off. Although this might seem to preclude flush mounting in a panel, AirGizmos is designing a remote lever/button arrangement that will transfer access to the power switch to the front of the mount.

The four aera models vary in capability and price. Other than shape, the two major distinctions between the x96 and aera are screen size and operating logic. The aera screens measure 4.3 inches on the diagonal, compared to 3.9 for the 296-and-later units. That works out to a 28% larger screen, and its noticeable in the way details appear and how the screens icons are used. Screen resolution is 480×272 pixels.

Garmin is cagey about brightness NITS, but the aera appears to be as bright as the color x96 screens. And why shouldn’t it be? Because in the aera, Garmin uses resistive technology for the touchscreen, which places a conductive layer between the display screen and the users eyeballs. When you press on the screen, it makes an electrical contact between the layers, conveying the command. The additional layer can reduce brightness, but it doesn’t appear to do that in the aera.

Speaking of the touchscreen, we experimented with it during some 20 hours of flying and experienced few complaints. In our view, it tends toward undersensitivity rather than oversensitivity. It never executed an unwanted command due to a stray touch, but on several occasions, it took two or three jabs to execute the desired command. 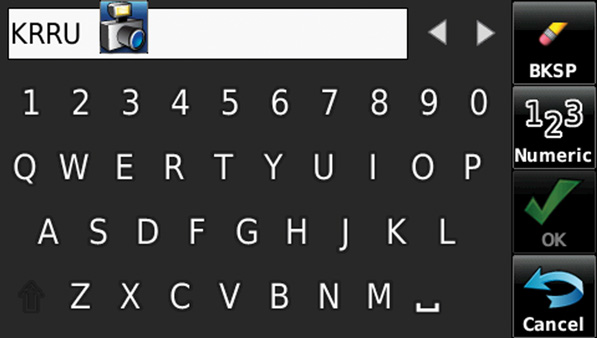 Direct keypad entry saves a lot of steps and prevents mistakes. Much better than a rocker switch, in our view.

The touchscreen is faster and easier to use than the x96s buttons and keys. Part of that is the sheer physics of not having to push buttons, but part of it is due to the streamlined operating logic that the aera allows. For instance, in the x96s, to enter a flight plan, you toggle to the flight-plan page, push enter to activate the cursor for editing mode, and then tediously key in the identifiers using the rocker key. Instead, the aera has a soft keyboard that allows you to punch in the letters for identifiers directly. Its quick and easy. 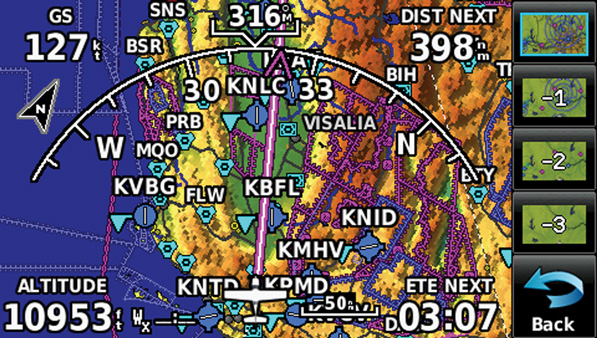 Screen resolution and clarity are excellent. Map symbology will be familar to anyone who has used a Garmin 396/496 navigator.

The streamlined logic is noticeably better for accessing weather. Rather than the x96s page key to toggle through the options, the aera has a homepage. Calling it up with a single touch reveals a dozen icons. Tap Weather, and another group of icons appears, each listing a specific weather product, such as Nexrad, winds aloft or icing. You can pull each of these up individually with just a few taps, a considerable improvement over the x96s folder-and-tab logic. 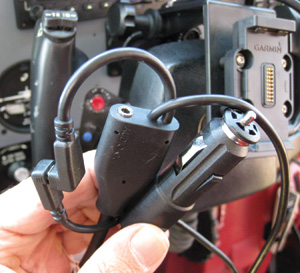 Wire bundle. A pigtail connects to an external XM antenna and ships power. There’s a bare-wire version for power/data.

The 396/496 have impressive terrain warning capabilities, including aural alerts and pull-up warnings. The aera retains these and allows some nice customization. On the dedicated terrain page, for example, you can configure a plan view or a plan view with elevation profile. All the color coding is standard TAWs stuff. The flight panel or HSI page is also retained and, using GPS position and altitude data alone, serves as an impressive minimalist PFD. Our legal department insists that we say you cant use this to remain upright in the clouds, but we know pilots who have.

Garmin’s four aera models break down like this. The base 500 ($799) includes a full navigation database plus standard-resolution terrain. The 510 ($1299) adds WX weather. The 550 ($1499) has high-resolution terrain, Safe Taxi, AOPA airports, a years free database updates, plus enhanced auto-based features. The 560 ($1999) has all that plus XM weather. Were not sure how the four-tier aera market will sort itself out, but we would guess Garmin is betting most buyers will opt for the full-up $1999 560.

Good news for homebuilders is that Garmin has improved the feature set but retained a serial output for autopilots, will load frequencies to the SL30 and SL40 radios, and will accept traffic alerts from the GTX 330 transponder. All of the aera navigators include the equivalent of Garmin’s nuvi ground navigator line, with a complete North American road database. With an AirGizmo mount, its simple and practical to use this feature when you arrive at your destination.

Ed Wischmeyer - January 20, 2007
1
With 4000 kits sold, a million hours flown and a loyal customer base, you just knew that the Kitfox would somehow find itself back in production. It's been out after the previous company, SkyStar Aircraft, went bankrupt in 2005, leaving builders in the lurch.

Kerry Fores - October 5, 2021
0
“Grandpa Kerry, where do unwanted airplane projects come from?” I choked on my ice cream....