Impatience: In normal life it increases blood pressure and can cause frustration and conflict. In flight-test operations, it can kill.

Flight-testing a new airplane is inherently more risky than normal flight operations in a well-proven machine. Even if the new airplane is of a proven type, its systems and assemblies have not yet been proven, and may have problems that will surface during early testing. If the airplane is a prototype, then much more is being tested for the first time. Both its mechanical functioning and flying qualities must be explored. The way to minimize the risk and conduct a safe flight-test program is to use a methodical, progressive approach. At each step in the process, a combination of planning, analysis and inspection of the airplane can help prevent unpleasant surprises.

The methodical, progressive approach is the safest, but it is also the slowest and most time-consuming. This can be frustrating, and there are a number of pressures that can motivate a builder to try to make things happen more quickly. If the airplane is a commercial project, the pressure of time, money or needing to be at a given show at a given time can be very powerful. For an individual builder who has probably already spent much longer than he or she expected in getting the airplane built and ready to test, the urge to finally get in the air is enormous.

A too-common mistake is to make the first flight a public event, which places the builder under pressure to perform for an audience, and avoid the embarrassment of having to cancel the flight. Unfortunately, succumbing to this kind of time pressure leads to dangerous decisions, and sometimes tragedy. There are several types of impatient behaviors that have led to flight-test accidents in the homebuilt and kit airplane world.

While reading reports on three accidents (two of which were fatal), involving unconventional prototypes, I was struck by the fact that one pilot attempted a first flight in a 15-knot crosswind; a second was doing high-speed taxi tests in winds reported at 15 gusting to 20, and most recently a fatal ultralight prototype first-flight crash occurred in winds reported at 18 knots. In all of these cases, the wind was strong enough that a pilot considering flying a well-proven airplane on a routine flight would have had second thoughts.

Wind, particularly gusty wind, adds dramatically to the pilot’s workload during fast taxi and takeoff. As we have discussed in previous months, careful control of airspeed during fast taxi tests and initial hop flights is critical to safety. It is essentially impossible to achieve this in gusty wind conditions, and the likelihood of becoming airborne unexpectedly or needing to apply large control corrections when you are low to the ground is great. This is a very high-risk situation in a new airplane.

For taxi tests, and early flight tests, calm weather is essential for safety. It might be extremely frustrating to have to wait days, or even weeks, for a safe weather window, but it is worth the wait. In my experience with testing new types, I have lost count of the number of days I drove to the airport to test, and then ended up going home without opening the hangar doors because the wind came up too early. I have never regretted a decision to delay or abort a test because conditions were not right. In calm weather, the pilot can concentrate on exploring the characteristics of the airplane, and can react to any issues that might arise without having to deal with the increased workload caused by wind and turbulence.

Many airplanes make their first flights in a somewhat incomplete state. It is not uncommon for an airplane to fly in primer rather than final paint, or with a sparse panel and interior. While there is nothing wrong with doing things like this, it is important to ensure that items critical to flight safety are completely finished and inspected so that they are in airworthy condition.

One potentially dangerous situation arises from the fact that some things are assembled temporarily during building, or for displaying the airplane at a show. It is common to use temporary, non-aircraft-quality fasteners to do this, and leave the final installation and safetying of the “real” bolts until final assembly before first flight. It’s easy to miss some of these temporary fasteners and inadvertently leave them in place.

Temporary assembly of systems is even more dangerous, because the systems may appear to work fine when tested, but in fact have dangerous deficiencies because of their temporary nature. Such a temporary assembly was the cause of a fatal accident to a warbird replica prototype some years ago. The unflown airplane had been temporarily assembled to display at a show. Part of the temporary assembly included installation of the aileron linkages so that the controls would move when the stick was moved. Unfortunately, under time pressure to get a first flight in, the pilot chose to fly the airplane with the temporary linkage installation still in place. It’s not clear whether the pilot was aware of this and made a conscious decision to fly with the temporary setup, or the airplane was not inspected properly before the flight and was inadvertently flown in that condition. The result was disaster.

Inspection of the airplane revealed that the aileron control bellcrank was not installed in accordance with records held by the pilot/manufacturer. Witnesses reported seeing both ailerons and the wings fluttering before the crash. Evidence indicated aileron overtravel.

Meticulous inspection of the finally assembled airplane is critical before flying. Flying an airplane with incomplete or jury-rigged flight-critical systems is extremely dangerous.

Another example of dangerous behavior motivated by impatience is the decision to attempt to fly an airplane with a known defect or unairworthy condition. In normal operations this usually happens when the pilot finds himself at an airport away from home and has a problem with the airplane. Rather than face the prospect of being stranded, the pilot will decide that the airplane can be ferried back to home base even with the problem. It is remarkably easy to convince yourself that the engine will smooth out after takeoff, or that the one working magneto will get you home. Unfortunately, it is not always true.

In early flight test, the rationalization that creeps into the decision process is that it is a local flight, in sight (and gliding distance) of the airport. This is a dangerous trap. No airplane should be flown with a known defect that can adversely affect airworthiness.

I witnessed this dangerous train of thought in action some years ago when I was helping a friend with the testing of a prototype high-performance two-seater. He had been through many struggles getting the airplane ready to fly, and had needed to make several modifications and repairs. At the time of the incident it had been almost a year since the anticipated first flight date had passed. On the day in question, the airplane was prepared, and the test pilot got aboard, fired up, and taxied out. A few minutes later the airplane taxied back to the ramp. The pilot got out and reported to the builder that the engine had failed the magneto check during the runup. The owner was most unhappy about this, and got in the airplane with the pilot, who fired up and repeated the runup to demonstrate. The engine ran strongly on both mags, and on one of the two mags alone, but on the other mag it shook violently and ran roughly.

The builder tried to persuade the pilot to take the airplane around the pattern anyway, using the short, local flight rationale. He argued that the engine was running strong on both mags, and that should be sufficient for the short flight planned. To his credit, the pilot refused. The discussion became heated, and the pilot finally ended it with the statement that, “I wouldn’t take off in a [Cessna] 150 with the engine in that condition.” The builder was not pleased, but he took the airplane back to the hangar. Later inspection showed that there were cracks in the insulation of the ignition wires, and that a total failure of the engine due to the state of the ignition wires was likely. The pilot’s decision to stay on the ground was the right one, and quite possibly saved the airplane and his life. A few weeks later, with new ignition wires, the airplane made a safe and successful first flight.

The builders of new airplanes are under a great deal of pressure to get their planes into the air and to prove their creations. It is important to counterbalance this pressure with a cautious, professional approach to testing that ensures the airplane will fly when it is mechanically ready, and the weather conditions are appropriate for safe testing.

Paul Dye - November 16, 2012
0
You've planned; you've prepared. Now we look at how to conduct your first flight in a homebuilt aircraft. 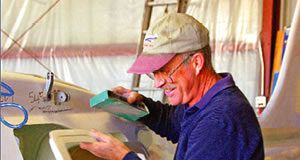 Bob Fritz - April 20, 2009
0
Bob Fritz presses on! In this installment, he powers up the Grand Rapids Technologies EFIS panel, solves a curious com antenna problem, installs the Zaon PCAS, fits the door to the fuselage’s curvature, and streamlines the air flow to the oil cooler.