Wander where rivets are shot and resin poured and you’ll soon come to know there are about as many ways to do these things as there are builders. This is a great comfort to the less assured such as myself, who can never be quite certain whatever it is we’re doing is the right way of doing it. Because, after all, if he does it that way and it still flies then how bad can my technique be?

Also evident after a short survey is despite the individuality manifest in so many workshops, we airplane builders actually lend ourselves to categorization. So, in the spirit of homebuilding relativism and recognizing the cruel reality that not everyone is as perfect as you and me, here are a few of the builders you may encounter. 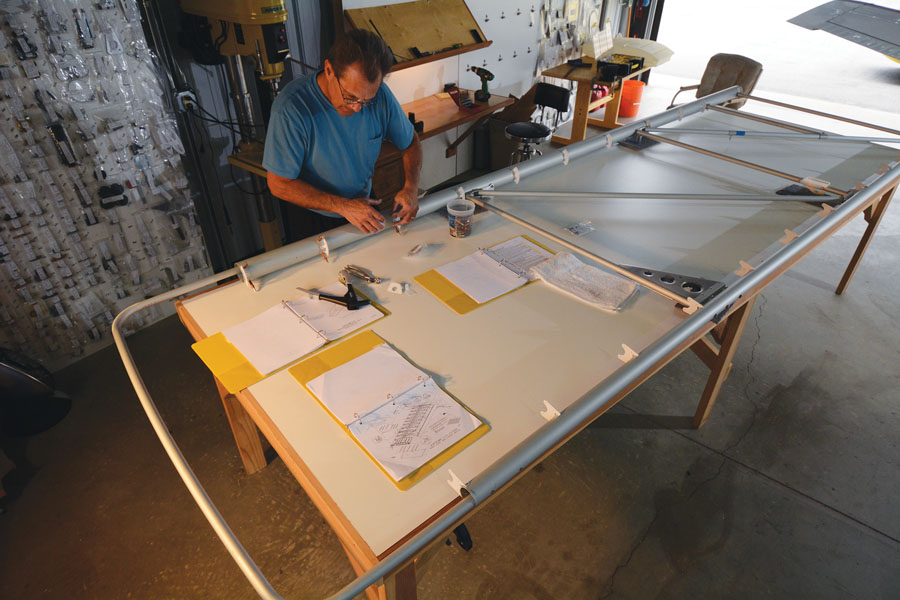 Timid, fearless, clueless, perfectionist, or pro—what kind of builder are you?

Backbone of our hobby, the regular Joe juggles his nine-to-five against family and spar cap. He only gets to spend several hours in a row building on weekends, but casual observers don’t see the work he sneaks in on weeknights. He truly enjoys the tactile rewards of building against his paper-and-electron-shuffling day job and takes justifiable pride in his surprisingly good workmanship.

Regular Joes are often invisible to the airport crowd because they get started at home, but some may already have a hangar and keep a tidy workspace in the corner. Eager learners and never one to claim expertise on anything, the regular Joe unashamedly gets advice or help from the pros as much as he can. The regular Joe may also lurk on forums, tends to ask good questions, and keeps notes.

Likely a regular Joe who’s dad was a cop, the timid builder measures seven times, makes a template, then cuts with the template upside down. He’s concerned about everything, fears failure, and may have trouble visualizing success.

The timids study a lot of product labels and use instruction manuals for bedtime reading. They’ve never done this before and want to be sure, so they ask you, the guy in the hangar facing them, the local pro, the guy visiting the local pro that day, and the Snap-on salesman how they do it, but still aren’t quite convinced that maybe there’s a better way. So they go home and search YouTube for the answer.

Obviously no handyman but determined, the timid can learn through repetition and often becomes quite good at things he succeeded with before. He pays for much pro help, knowing it’s money well spent and is best off with a fast-build kit of a simple airplane. That a timid perseveres is neo-heroic and should be applauded.

Antonym of the timid, the fearless once read part of a Revell instruction manual, but that was a long time ago. Paperwork is useless bother to these guys, both during the build and afterward. Yesterday is gone, tomorrow may never get here, now is all that matters, so get with it!

The most amazing of builder types in many ways, the fearless walks up to his plane, holds the new scoop up, says, “Yeah, this is about right,” and starts cutting. He doesn’t measure, check for square, tape it up, stand back and see if it looks right, check the way a hose can attach or anything else; he just cuts. And before you can catch your breath he’s clamping SCAT ducting to his new scoop.

Amazingly, most of the time these guys get it right. Most of them have been building model cars, model airplanes, birdhouses, banjos, boats, race cars, motorcycles and now airplanes for so long, they see finished systems in one motion and aren’t worried about a tiny misalignment in a scoop. Bubbling with confidence, buoyed by experience, and unafraid they’re overlooking something, they just barge in and build.

Luckily fairly rare, the not-a-clue character is not really a builder. But he’s got his head in the clouds and some foggy fantasy of winging over America just as soon as he gets his license. He’s carefree as a freshly fed kindergartner and hasn’t an inkling as to what he’s talking about.

This guy is really not a builder because he’s at heart a dreamer and doesn’t have a hope of finishing a Guillow’s three-piece rubber band model.

If you’ve never met a full-blown clueless, they are at least easy to spot once they show up. Grinning like he has good sense, the clueless could blow through your airport one afternoon—these guys aren’t out of the house before lunch—telling people he’s got an old pickup with a great six-cylinder engine he’s going to put in that abandoned Aquajet-X project the EAA chapter is giving away. For sure he’ll buy half-built, orphaned projects that even the most optimistic builder would split-s at 1000 feet agl to get away from. The clueless is known to start multiple projects but never finishes.

Ah, Peter Perfect. It’s not a hobby, it’s a disease, and he’s got it worse than anyone. No detail is too arcane not to obsess over, no blemish too small to ignore.

The perfectionist’s shop was once featured in Architectural Digest. His tools are all new or at least look fresh off the truck a decade later. The floor is epoxied, the toolbox waxed. Everything has been placed with care, often after a couple hours of trial placements. Most perfectionists build at least two airplanes for each completion because they just don’t build the rudder; they built a test rudder—which is flawless—before tackling the real thing.

Emotions run high in the perfectionist’s hangar because these things matter, and any arguments regarding cost effectiveness or functionality are as lost as car keys in a lake. Likewise, any damage or damage history, or any possibility of damage history is disqualifying to the perfectionist whose virginal nirvana accepts only perfection.

The FAA can’t see them, but there are samurai builders for hire. Of course, they normally don’t build airplanes from start to finish, but rather earn their keep by finishing off lagging projects for regular Joes, timids, and stumped perfectionists, brought to reality by work and the calendar; or they’re hired for the real work of making cowlings or canopies that fit.

Pros work on airplanes full time and have the skills of we amateurs’ dreams. Need an engine mount crack repaired? The pro has you operate the foot feed to his TIG welder while he stands on a ladder making those frying egg sounds using a mirror to see the bottom of the tube he’s closing. He might chew a little gum or tell you about his weekend in the process. Pros fabricate cooling baffling so tight silicone sealer is more cosmetic than anything. Pros like safety wiring.

Pros tend to hate bargain solutions because they know there aren’t any. They gravitate toward really nice tools but can get the job done with two rocks and some aluminum scrap if necessary. Pros are at the airport every day except Sunday, and they drive everywhere they go, even to other airports.

Garmin’s bread and butter. His idea of fun is watching a sunny day on TV, so he’s building a media room with wings attached. A gadget freak can’t understand why more RVs don’t have autothrottles, and he’s replaced his panel twice, but the airplane hasn’t flown yet.

Gadget freaks wish the local fly-patch had a control tower and own WACOs with radar.

Something of a futurist, a good gadget freak is always on the prowl for the latest widget. Just as soon as he’s finished installing canine cannulas for the dog bed O2 system in the back of his T-18, he’s going to investigate those electrically retracted tiedown rings he’s heard about.

The amazing thing is it seems to take all types to get new Experimentals flying and keep the old ones in shape. And for sure it keeps things from getting dull.