This is the first of a short series of articles about crashworthy design of light aircraft. While none of us want to crash, we all want to survive one if it happens. I’m not going to discuss how to fly safely to avoid a crash, just the aircraft characteristics that you can design in. We’ll assume that you can avoid a smoking hole and make an arrival that, with decent design, is survivable.

I’m using an online reference called Small Airplane Crashworthiness Design Guide, edited by Hurley and Vandenberg and prepared by Simula Corp. as an AGATE product, as a guide to these articles. In this article, I’ll refer to that as the reference.

AGATE stands for “Advanced General Aviation Transport Experiments.” This was a joint venture between NASA and private contractors with a goal of developing and “revitalizing” general aviation. You’ve probably seen photos or videos of small airplanes being crash-tested by NASA, and these were part of the program. Curious factoid—did you know that the girder system that the aircraft were hung from was originally part of an Apollo lunar landing practice device?

For certified aircraft, Part 23 provides some rules for crashworthiness. Section 23.561 says that the people inside need to be protected, and that there must be a reasonable chance of avoiding serious injury. It includes some load factors that I’m not going to repeat here.

Another paragraph, 23.562, says that dynamic tests are needed for the seat and the restraint system and describes what types of testing and what the minimum parameters ought to be. The tests simulate a flat impact with a high sink rate and a frontal crash.

For our Experimental aircraft, these tests aren’t required—but knowing about them gives you an idea of what’s a realistic event to prepare for. AGATE found that a typical survivable crash included these general characteristics:

Now I don’t want to give you the idea that all crashes that are within these parameters are survivable, or that any that aren’t are necessarily fatal. Some aren’t, at least for all the occupants. And airplanes crash with all sorts of arrival characteristics. But as designers, you need something to design for and these give you a notion of what to expect. For those parameters, by the way, roughly half the occupants survived. 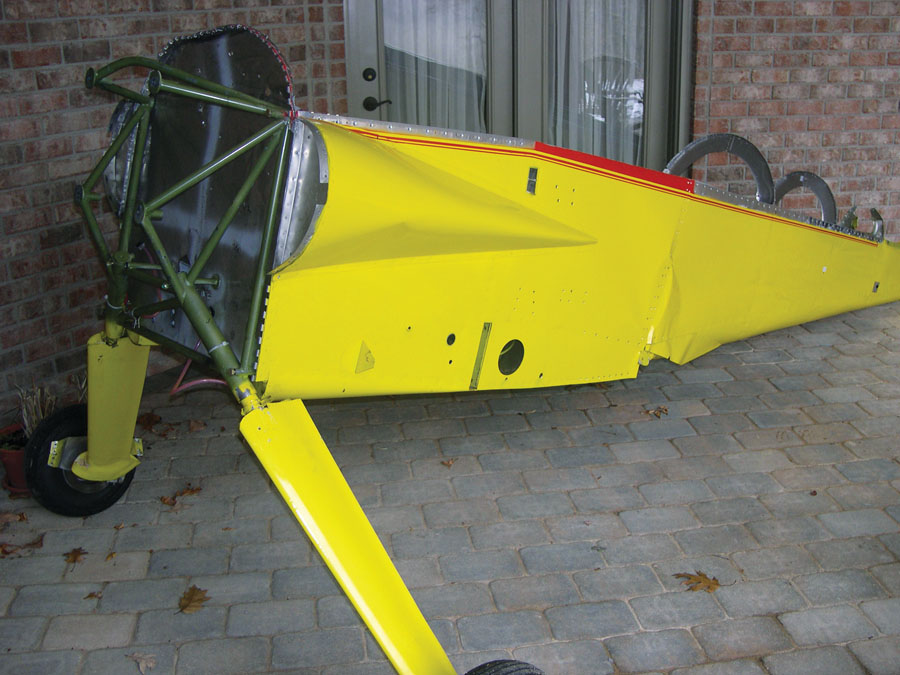 This RV-3 is being rebuilt after it flipped over. It had a roll bar and the pilot survived, but much of the aircraft was damaged. (Photo: Larry DeCamp)

If it hits a hard surface, it’ll slide. The front-seat footwells and the lower nose structure often deform. The seat and subfloor structure carries a large load. The airplane rotates to a horizontal position quickly, which means that there are large rotational accelerations and decelerations in pitch, as well as the vertical linear acceleration. Fuselage bending is an issue, and at least one of the AGATE test videos show the tail cone of a Cessna 182 bending up over the cabin like a scorpion stinger.

If the plane hits a soft surface, it kind of just stops, with big longitudinal decelerations. The front of the airplane carries the brunt of that and “anti-plowing” structural features become important in aiding survivability. Ideally, the airplane will pitch up and slide out of the crater and slide along the ground. So there’s more rotational acceleration and deceleration to deal with.

You’ll need to simultaneously include multiple design approaches to crashworthiness to make an aircraft that’s survivable.

All this means that some basic physics is in order here. While the relationships between acceleration, speed, and distance make for an excellent opportunity to learn about basic calculus, we won’t do that today. The symbols are:

Using these, and assuming that acceleration is steady throughout the event, a terrible assumption in crash dynamics, the relationships are:

Playing around with these using some algebra gives this:

This means that the initial speed is really crucial in the accelerations the occupants experience, and the greater the distance they have to dissipate that speed, the better.

Since the force on a person depends on their weight and their acceleration, we have an equation for that, too:

This is because mass is weight divided by Earth’s gravity. Gravity is an acceleration, so engineers use the easier formula F = m * a for this equation.

An important detail is that while these equations work fine using an average acceleration, in a crash the airplane doesn’t see the average. What it sees is the instantaneous acceleration at any slice of time in the event. That instantaneous smidgeon of the ride has its own momentary forces and accelerations and leaves the airplane’s speed reduced by a small amount, ready for the next instant’s adventure. During this, at each point in time, these equations describe the relationships. When the plane has halted, then averages can be used to describe things—but it’s the instantaneous accelerations and forces that the people felt and that actually controlled the ride instead of the average.

We’d like to minimize the forces on people. They’d like that, too, and survive better if they aren’t being squished or battered. So it’s up to the designer to provide the means to give them room to absorb the initial crash velocity.

One way to do that is with deformable materials and shapes, plus the volume necessary for them to do their job, and another way is by attempting to have the airplane skid across the ground instead of digging in. To the extent possible to include, both are desirable approaches. The ability to skid across the ground, instead of digging in, is something that you can get if you shape the bottom front of the airplane right and give it enough structure to maintain that shape during a crash. Deformable materials include things like foam and honeycomb, and deformable shapes buckle in known places and shapes at known loads. Or they might tear apart in a tailored manner; a composite airplane was tested and it climbed out of its impact crater (with good front-bottom design) while its engine tore off and departed ahead of the aircraft.

When heavy things come off of a crashing airplane, that leaves less kinetic energy that has to be absorbed by the cabin, and that’s good.

Kinetic energy has an equation, too:

You can see that it, too, depends on the speed squared.

Since most of our airplanes are primarily designed for humans, you’ll need anthropometric data showing how big they are and how they can move. Of course you can just measure yourself. The reference has a number of sources of that data and introduces a concept called the “flail envelope.” This is because during a crash, we tend to flail around quite a bit. There are some drawings showing the envelope, and in particular, there are some that show the range of motion of someone’s head if they are wearing a 5-point harness. From looking over those drawings, it appears as if a person’s head might move about 8 inches sideways, 20 inches forward, 12 inches downward, and maybe a bit more. The idea is that in a properly designed airplane, heads shouldn’t bash into things.

The hands and feet move around much more than that, but since they also have to be able to reach controls, it’s probably not possible to prevent all contact.

One issue you’ve probably heard of is submarining, where a person’s body slides under the lap belt. This usually causes quite a bit of soft-tissue damage. It’s a serious concern and justifies the installation of a five-point harness for everyone.

In general, analysis of crash events is a difficult thing. Standard classical analysis techniques are not valid because crashes involve the non-linear behavior of materials and shapes. About all you can calculate are the provisions for certain things to buckle in a particular order and for other things to fail in a pre-determined manner. This is made somewhat more difficult because many of the analysis techniques are biased towards ensuring that things don’t fail; they don’t accurately predict the failing load. They predict the highest load at which things don’t fail, a different critter, but do give you an idea of what’s going on.

There are software packages that can do a good job of this. I looked into one of them, MADYMO, and it appeared comprehensive. It included features like models of human bodies and safety harnesses and even airbags. It’s intended for the professionals at the job. Since it’s an industrial product, the price is high and the learning curve is steep—so steep that I didn’t obtain a review version to try out.

The reference has a handy crashworthiness design assessment form in Appendix B that’s 28 pages long. Appendix C has a fuel system design checklist. Both of these are reasonably useful and many of the points that they mention have been discussed in the body of the book. For example, Table 1 shows how the landing gear configuration is assessed, with more points being the goal.

So from a crashworthy configuration point of view, my RV-3B project is worth 15 points out of 25 since it’s a low-wing taildragger. My Cessna 180 is only worth 10 since it’s a high wing taildragger. The entire assessment form can give up to 725 points for a fully optimum airplane, so you can see that the 25 points allocated here is only a very small part of the overall picture.

In the fuel system design checklist, here are some example questions. There are 74 such questions.

These will give you an idea. I recommend downloading the reference for a full picture.

Ernst Bickmeier - December 23, 2016
0
It took 10 years for Hansueli and Samuel Gautschi to complete the ultimate do-it-yourself project, and the result is an absolute gem. By Ernst Bickmeier.