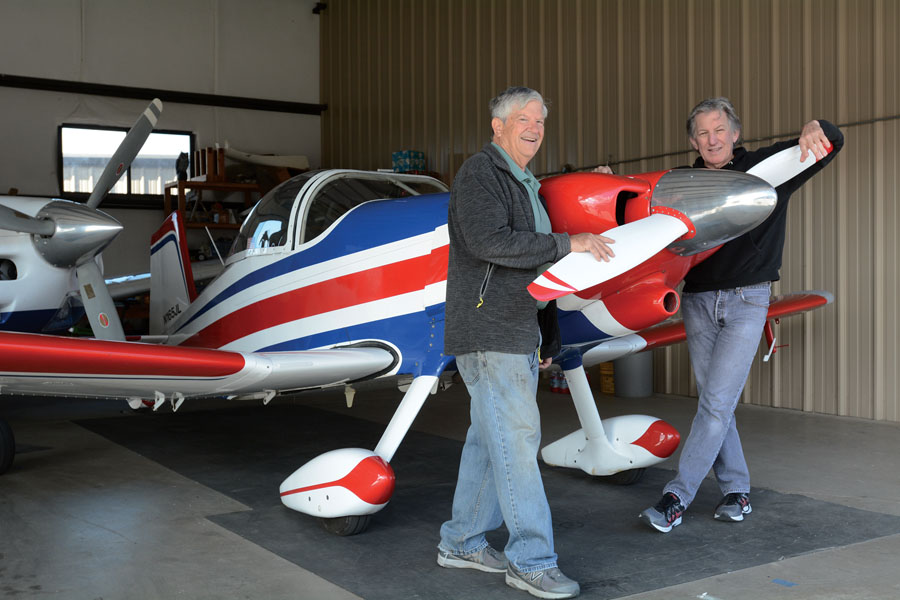 Everyone needs two airplanes—one for going places and another for fun. Getting that second plane, such as this Thorp, is a lot easier when you have a partner to split the costs with.

Some years ago I attended an AOPA gathering in the nearby metropolis. A sober group, they never go for flying under bridges or that sort of thing, so it was a safety meeting of some sort, as you’d expect.

By chance I was sitting in the front row, enjoying the comfort of a folding metal chair like a Lutheran at a potluck. The presenter asked the multi-hundred assemblage of pilots what the main challenge continued to be for aviation. Not expecting anyone to hear me, I quietly muttered, “Paying for it.” That stopped the speaker, who laughed, handed me the microphone, and told me to tell the audience what I had just said. Everyone got a chuckle, but hey, I was kind of serious.

Sure, the correct answer was “weather,” but for me that’s never been the overriding issue. Certainly dealing with nature is by far the most daunting aspect of hurtling oneself heavenward, what with dark, wind, heat, ice, and all the rest, but unlike an airline or charter outfit, if the weather is bad, I’ll wait a day, scrub the trip, or grab the car. It’s really cheap, very effective insurance. And besides, I live in SoCal; how bad can it be?

So that leaves paying for aviation as the real challenge, and I suspect this is true for most of us. It may even be the major reason many of us work with experimentals. Certainly working with our hands is rewarding, and as we hinted at last month, some of us may simply be looking for a way out of the house for a while. But no matter what, rolling and maintaining your own is more fiscally responsible than going store bought.

And make no mistake, aviating is expensive. It never was cheap and never will be, but for a host of reasons we’re living through a monetarily punishing age in personal aviation.

However, I stumbled across a fine way of cutting the high costs essentially in half: partner up. In my case an old friend showed up, looking to get back into a recreational airplane after a 20-year layoff, but he hardly wanted a full-time airplane or its costs. We ended up buying a Cessna 140A together, but it could have been an RV or Pitts or whatever. Like the partnership, the 140A was in the right place at the right time, and whether the plane was certified or experimental is fairly immaterial to our partnership experience, which has been wonderful.

What’s made the partnership so great is the two of us are well matched as owners. Surprisingly, and importantly, this does not mean we’re two ear cups on a headset, but rather our differences are complementary. We’re similar in our approach to aviation if wildly different in our experience—he has over six times the hours I do—so when faced with a choice about our plane, it’s easy to arrive at a mutual decision.

Respect for each other’s abilities is paramount because it builds the trust that is the glue that holds a partnership together. In our case we value stick-and-rudder skills over tie-and-epaulet checklisting. My partner is the better pilot, but I guess I’m good enough not to worry him enough to let it show, and he’s a great resource when my knowledge is lacking.

We’re also well matched as mechanics and enjoy working together on the plane. Even better, at 6 feet 2 and 250 pounds, it’s a little silly to send me into the aft fuselage or under the panel when my partner is on the more compact end of the range. So he gets to do all the panel diving while I wax the leading edges. Works for me!

Of course, the sharpest fulcrum over which most partnerships are broken is filthy lucre. Our arrangement is to split all the bills equally, but true to form, we don’t hold ourselves slavishly to it. The fixed costs, such as hangar rent and insurance, plus most of the parts purchases, have in fact been paid equally, but when it was clear my new-pilot son and I had done far more than our share of wearing out the main gear tires, my son and I simply replaced the tires—both financially and physically—and didn’t bother my partner about it. For his part, he’s often left fuel in the tanks that I’ve burned.

That bit about fuel is a little tricky. Many partners simply fill the tanks after each flight so each pilot replaces his own fuel and the plane is always full. That’s good but imperfect in our case. For one thing, both of us often take really short hops. My partner is notorious for spending all day at the hangar and only flying once around the patch. It would be dumb to stop at the fuel pit just for that. And, our Cessna has long-range tanks and a limp rubber band for power. Keeping seven hours of fuel on board is silly when none of us ever flies half that long, and our runway is short and under hot skies. So we both casually put fuel in as it makes sense, and if that means he burns a little of mine or I a little of his, we don’t worry about it.

Then there’s the trust issue regarding money. Neither I nor my partner is interested in spending our limited time on earth counting pennies. Because I have more time during the business week, I tend to make all the purchases. The big stuff—such as the new exhaust system we had to cough up—I’ll confer with my partner on, but the oil and filters, I just buy. I put the receipts in a notebook we keep in the hangar, my partner never looks at them, and when it’s time I’ll let him know how much he spent last week. He typically writes a check on the spot. I pay the hangar rent; my partner pays his share to me a half year in advance, and I don’t even have to ask him for it. You can’t get a better partner than that.

Again, because I have more time, I do the bookwork and set up the annual inspection and other mundane chores. I’m happy to because I’ve had jobs where I was so busy I didn’t know what season it was, and if I can make sure the plane is ready to go when my peripatetic partner can get away long enough to fly it, it feels good to have helped.

Maybe one thing that helps is the plane was finished to a high standard when we bought it. No one had to agree on what color to paint it or talk the other one into whitewall tires. Our decisions are more objective than subjective.

Another huge advantage we have as a team is we are both homeboys in our small town, and while my partner was away from aviation and the airport for two decades, we share the same airport background, starting back in the late 1970s. That helps with trust.

Both of us have truly benefitted from the partnership. I must say, the finances have been incredible. The big-block Starduster is sort of a financial free-for-all, so the putt-putt Cessna was already a monetary winner. But to then split its meager costs in half was truly game changing. It’s so inexpensive to fly that I don’t mentally budget the ROI of every flight like I do the Starduster; I simply go fly the little guy. That’s been a real eye-opener.

But best of all has been the rekindling of an old friendship and having someone to share the fun with. If you’ve ever considered a partnership but have been put off by the horror stories, my advice is to make sure your prospective partner shares your basic philosophy and you have each other’s trust. With minimal accommodation from both of you, it could work out better than you think.

Kitplanes - August 6, 2011
0
Searching for Bear Metal After an absence of many years, I'm starting to...