For a lot of years (nearly 50 by my count), we’ve standardized digital circuitry to run from a 5-volt power supply. This all started when the folks at Texas Instruments (Dallas, Texas) and National Semiconductor (Santa Clara, California) teamed up to bring us the first digital “chips” called the “TTL” (Transistor-Transistor-Logic) family. Rumor has it that the engineers compared notes and the common power supply they both had on their test benches was 5 volts, hence the whole world standard of 5-volt supply was set. Even today with our billion-transistor computer processor chips, the surrounding circuitry all runs from a monster 5-volt power supply in the computer. 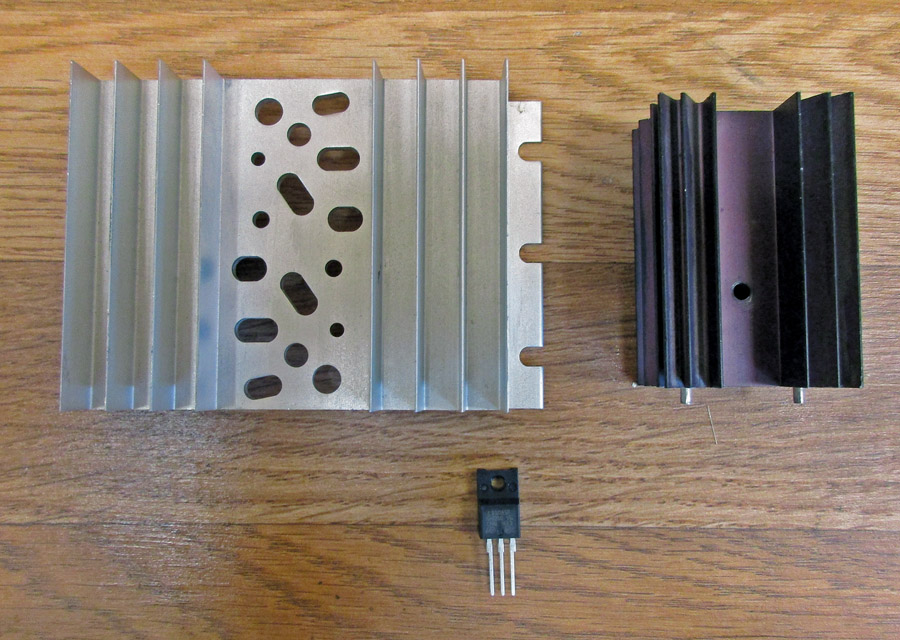 A selection of heat sinks, but none of them is large enough to keep the IC (small black square at the bottom) cool enough to stay within limits at 2 amps. If you could somehow bolt the large silver one on the left to a large piece of aluminum structure, you may be able to keep the IC below the 125 C limit. (Photo: Jim Weir)

The problem rears its ugly head when we want to run or charge up our cell phones, tablet, or pad mini-computers and the like from the 12/24-volt battery bus in the airplane. Somehow we have to drop that aircraft battery supply down to 5 volts. Even more serious is the fact that the current crop of iStuff and Android tablets and pads can take up to 2.5 amps to simultaneously charge and operate. There are two ways of making this transformation—linear and switching regulators. Each method has its advantages and disadvantages. This month’s column will examine the linear regulator in some detail. Next time we’ll attack the switching method.

The advantage of the linear regulator is an extremely simple electronic design. Almost trivially simple. The disadvantage is that it is very wasteful of power, and with that wasted power comes a whole bunch of heat that we’ve got to get rid of.

Take a look at the schematic. You may recognize the integrated circuit from last month’s lamp dimmer. The IC comes in several fixed voltages as well as a continuously variable voltage. We used the variable version in the lamp dimmer, but we’ll use the fixed 5-volt version in this design. Same price, but it eliminated one fixed resistor and one variable resistor. The only external components are a couple of dime capacitors. 12/24 volt battery in, 5 volts at 2 amps maximum output. Electronically extremely simple.

Here is the kicker…if we presume a 14-volt maximum for the “12-volt” system and 28 volts maximum for the “24-volt” system, then we can calculate how much heat we are going to have to throw away in the IC to make this happen. Once again, Brother Ohm tells us that power (in watts) is the product of the voltage across a device in volts, multiplied by the current through the device.

For the 12-volt system, the voltage across the device is the maximum 14 volts, less the output voltage of 5 volts, or 9 volts across the IC. Multiplied by the 2-amp maximum current means that we have 18 watts of power to get rid of.

Perhaps the easiest and least complicated schematic I’ve ever done for KITPLANES.

For the 24-volt system, the same calculation shows that the voltage across the IC is 23 volts times the same 2 amps, which gives us 46 watts to vent to the ambient air in some method. That, my friends, is going to be a pretty hefty heat sink of some sort. Let’s see what we might be able to cook (you should pardon the expression) up for this problem.

First we need to know the limits of the IC itself, and then we can work backwards to find out what sort of heat sink will be necessary. The IC “chip” has an absolute maximum temperature of +125 C. Yes, we are going to be doing all of our calculations in C because all current data sheets use metric temperature. I want just a little safety factor, so I’ll make the design for a maximum chip temperature of 120 C.

That’s not going to be easy. There are heat sinks that will meet the 1.4 C per watt specification, but they are about the size of a pound package of butter. You might want to experiment with seeing if there is a large chunk of airframe aluminum that doesn’t mind being heated to this sort of temperature and using this aluminum as your heat sink. The problem is not an easy one to solve, which is why when we get much above an amp or so, we start running into these sorts of thermal problems.

Don’t even bother doing the calculations for a 24-volt system. If we got into this much trouble trying to get rid of 18 watts of heat for the 12-volt system, the problem for 46 watts is nearly three times bigger and virtually impossible to solve.

I’ll just bet you thought I was going to leave you high and dry to solve these problems. Not me. That’s why we invented the switching power supply that can run 90%+ efficiency, and we now can treat the heat as a minor problem with an increase in circuit complexity. It’s a trade-off that is very much used when we get to large currents and relatively high voltages. Next month, the easy solution…Until then… stay tuned…