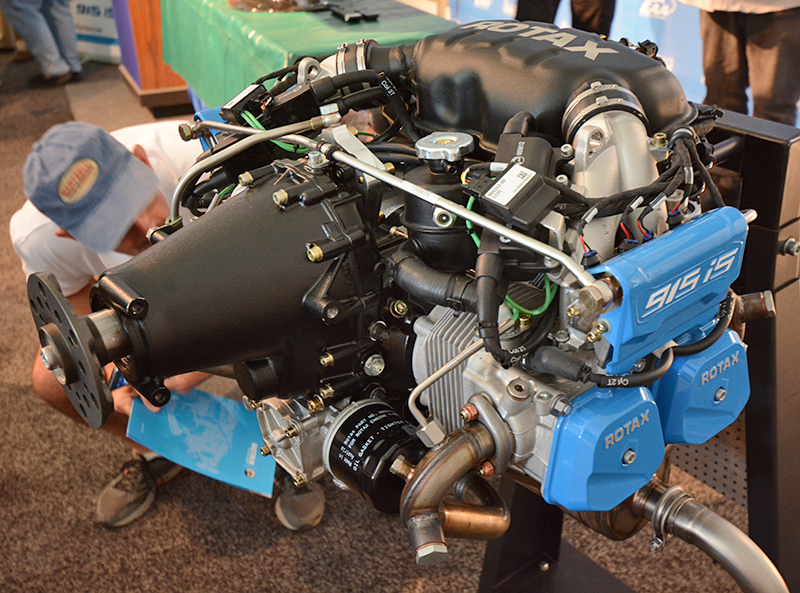 Rotax just caused a stir in the AirVenture media center with the announcement of the turbocharged 915is. Essentially a turbo version of the popular 912iS, the new 915iS should be available in the second half of 2017.

Rotax says take off power is available to 15,000 ft, and that’s 135 hp at 5800 rpm using 98 RON gasoline (95 RON is the minimum required; 100LL is acceptable). Torque is also increased, as Rotax said a new PSRU gearbox is used, but a torque rating was not immediately announced.

The 2000 hour TBO and dual-redundant electronic fuel injection from the 912iS are retained. The latter now also controls the wastegate, so boost control is automatic and requires no pilot input. The core engine is also mainly 912iS, but at least the crankshaft and new forged pistons are upgraded. The crankcase and cylinders were confirmed as 912iS carryovers.

Rotax reports over 2000 dyno hours have been logged to date; a helicopter version may be coming eventually as well, as Rotax has received requests for such an engine.

Check out this video by Paul Bertorelli from our suster publication AVweb: