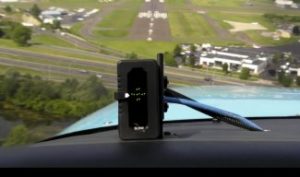 Safe Flight Instrument Corporation announced at AirVenture 2014 at Oshkosh, Wisconsin, the new SCx angle of attack system for experimental aircraft. The system uses a lift transducer that–unlike other AoA systems–provides real-time output of the stagnation point on the aircraft wing and converts it to angle of attack.

Safe Flight says wing-mounted transducers have advantages over differential pressure transducers which can be less accurate in low airspeed and slip conditions. Moreover, the lift transducer sensing the stagnation point change has been utilized in primary stall warning systems for nearly 70 years.

The leading edge sensor sends AoA data to a glareshield-mounted indexer/computer display which provides a flashing red LED output as the aircraft nears the stall. There’s also an audio output to warn of increasing AoA. The indexer has a sliding reference marker that allows the pilot to change the focal point, providing indication for best rate and angle of climb, best short field approach and best cruise when flying into a headwind or tailwind. 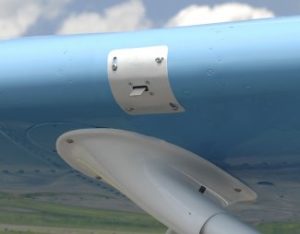 The system, which weighs roughly 10 ounces, can operate on either 14 or 28 volts input voltage and sells for $1495. Customers at AirVenture 2014 will receive a $200 show discount.

The system can also be purchased online at www.safeflight.com