”Experimental Two Sierra X-Ray,  Oshkosh Tower, you are clear for touch-and-goes on any runway. Enjoy.”

That is one of a handful of ATC communications that stands out in my memory. One of my favorites. Another I recall is, “Four November Papa, call the tower on a landline after shutdown.” Oops. There was the time I needed clearance from Minot Air Force Base ATC to start my engine. I don’t know why this was cool but it was. Maybe because it’s as close as I’ll get to being a fighter pilot. A few years ago, I asked a retired Air Force air traffic controller why clearance is needed for engine start on an air base. He replied, “I dunno, that’s the way it’s always been.” So there you have it. I’m wandering.

My logbook preserves the date I was given Oshkosh’s Wittman Regional Airport: August 27, 2006. The air was motionless, the sky intoxicatingly clear, the sun slumping toward the horizon. I was the only aircraft in the pattern and ATC forestalled my ever-changing runway requests by issuing a blanket clearance for every runway. In short, the airport was mine. Like a child, I played and skipped on all eight runways.

On another occasion I was assigned Oshkosh’s Runway 36 for takeoff. I requested a westerly heading after take-off and was cleared for an immediate left turnout to remain south of Runway 9/27, which lies off the departure end of Runway 36. Not one to miss an opportunity, I banked left as soon as the wheels stopped spinning and bisected Oshkosh’s new and old control towers—the old tower having been decommissioned but not yet demolished. When you get that one chance to buzz two towers, you take it.

I was often part of the Sonex Aircraft builder workshop flybys, which provided attendees the opportunity to see the airplanes in action. I liked to demonstrate the design’s capabilities by taking off on Runway 27 and climbing at the best-angle speed until Runway 18 was just behind my left wing. With the tower’s consent, I’d turn 270° to the right, which positioned me on a high, short final for Runway 18. After pulling the throttle and deploying full flaps, I’d slip aggressively, hoping to introduce Metal Illness’ tires to the white “18” painted on the runway. It was great fun and good practice for an engine-out emergency.

When Jeremy Monnett, Sonex Aircraft’s CEO, announced his wedding and I learned the wedding party would pass the time between the ceremony and the reception at a waterfront restaurant on Oshkosh’s Fox River, I got an idea. I enlisted the owner/builder of the first customer-built Waiex in my scheme and together we planned and practiced a simple aerial salute. Coordinating with Oshkosh ATC (we were in their airspace) and Jeremy’s brother, Jason, on the ground, we approached the restaurant from the west, smoke on, and scribed two interlocking circles representing wedding rings. It was a surprise to both bride and groom, and it was captured by their photographer. On departure we performed a two-ship missing man salute to acknowledge another bachelor lost to matrimony.

Who knows how some things come to be. One person mentions something to another, their cousin gets involved and speaks to someone’s in-law and you find yourself saying “yes” to performing a flyover to open the summer games for a group of people you will never meet. On the appointed day, with my brother as ballast, we launched into summer’s haze and turbulence. Our first challenge was locating the target based on street directions. “It’s 3 miles north of County Z, just past Kathy’s Kountry Kurls (and Taxidermy). You can’t miss it.” We allowed enough time to get lost, get ourselves found again and loiter far enough away to remain undetected until the time for the flyover. That set us up for the second challenge—the flyover was to come at the end of the playing of the Star-Spangled Banner, but without coordination from anyone on the ground. Apparently, I did OK. The flyover was a surprise to everyone except the person who coordinated it (whom I never met nor even spoke to). Word filtered back from…someone…that the flyover was a hit.

One October Sunday afternoon here in Packer Country—always a great time to fly, the sky is empty—I pointed my polished spinner north to see how fall had painted Wisconsin’s Northwoods. My track required a significant crab angle to offset a motivated westerly wind. I was at 6000 feet agl when I thought to pivot into the wind and retard the throttle while easing the stick aft. After a few small rudder inputs, some generous throttle adjustments and a bit of gentle rowing to set the elevators just so, I was stationary in the sky, a geosynchronous Sonex. I was neither climbing nor descending, advancing nor retreating, drifting left nor right. I hung for a while—minutes—and then, chuckling, descended from 6000 feet while remaining over one point on the earth. I rode the configuration down to 2000 feet before it became too turbulent to maintain. I can only imagine what ground-bound observers must have thought.

We spend years engrossed in the literal nuts and bolts of building a flying machine. By FAA mandate, we spend the first 40 flying hours close to home, sorting out the airplane and testing all manner of performance parameters, before we give much thought to the fun we can have. Some never get to the fun, fretting over every temperature indication, voltage fluctuation and swing in oil pressure. That’s too bad. There is flying fun to be had after the years of building and it can come in simple and unexpected ways. Call them shenanigans. 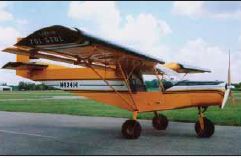 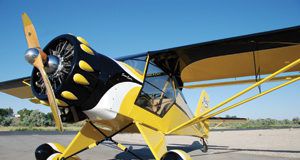