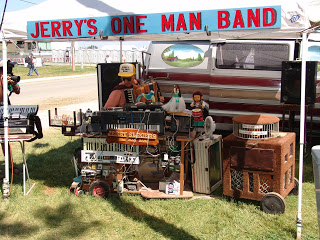 Sure, just uttering the word “Oshkosh” among a bunch of pilots brings expressions of contemplative bliss to most of their faces. I’m no different, I’ve made the annual pilgrimage over 20 times myself. Yeah, the aircraft and aviation products are a huge draw, but I always get a smile on my face when near a certain out of the way corner between the exhibition hangars and a long line of Porta-Potties. You just can’t help but get a little spring in your step when passing by, because there’s no avoiding the constant serenade from Jerry Sleger, of Jerry’s One Man Band. 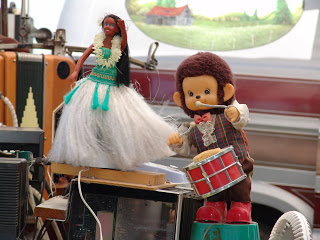 Part accordion virtuoso, part garage sale, and flavored with a bunch of Rube Goldberg, Sleger has been occupying his spot at AirVenture for the last 22 years. And for those of us who sometimes feel that this world is moving way too fast for us to keep up, one steadfast constant is Jerry Sleger, who tirelessly dispenses toe-tapping polkas and waltzes year after year. After year. And I’ll even admit it’s not just the music – I’m a sucker for the mechanical monkey and hula-girl who keep time to Sleger’s offerings.

OK, Sleger has made some concessions to modern technology. Since 2002, he’s been offering CDs as well as cassette tapes of his music, if you’re so inclined. But for a measly fin, you can still get a cassette. A CD will set you back four bucks more. In an environment where expensive aviation goodies and expensiver airplanes abound, Sleger’s music is an absolute steal (although some would argue that accordions are incapable of producing ‘music’ at all). 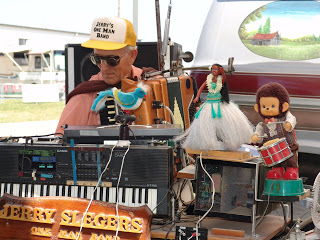 Whatever. I just bought all three CDs, and I fully intend to share them (quite liberally) with my friends while were driving the rental back to the airport in Chicago (they can thank me later). But I’m already looking forward to our next AirVenture visit next year, and not just because of all the neat airplane stuff. There’s a little musical oasis here, as constant as the sun, where one can sit on a bench in the shade and experience a simpler time. And it won’t cost you a dime.

Bill Repucci - June 14, 2011
0
An untimely prop strike results in more than just a call to the insurance company. Decisions regarding engine and propeller replacement open up numerous options. By Bill Repucci.