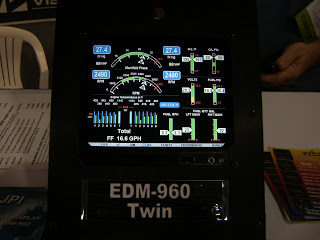 J.P. Instruments announced three new displays for twin-engine aircraft, as well as a fuel quantity instrument—all will be available in January 2009.

JPI’s Ottis Cameron gave us the rundown of each display, starting with the 6.5 x 5-inch single display Twin EDM-960. Expected to sell for about $15,000 for a six-cylinder display, including all probes and leads, the all-in-one instrument displays the manifold pressure and rpm for both engines in a conventional arced display with a dual needle. In addition to the graphical display, both MP and rpm readings are displayed in a large blue box with the digital readout.

Vertical bars with dual needles display your oil temp, oil pressure, fuel pressure, volts, fuel flow and fuel quantity on the right-hand side of the display. The screen is laid out in a logical, uncluttered fashion—the arcs are clustered together, as are the bars.

The display is bright, crisp and has good contrast; in a busy cockpit, it doesn’t seem as if it would take extra brain power to integrate the information. EGT and CHT information for every cylinder is depicted graphically and numerically in the lower left quadrant of the screen, accompanied by the OAT digital readout. A USB port is installed in the instrument, allowing you to download the data in the plane without hauling your laptop out.

The flat panel EDM-760 for twin-engine planes features a bright new color 3.25 x 4-inch LCD, a real improvement over the traditional displays. Priced at about $5000 when it becomes available, the EDM-760 displays the CHT and EGT for each cylinder full-time in large, bright white digits; the appropriate cylinder number being read is highlighted in white as well. Other features include lean find, shock cooling, and long-term memory with USB downloading incorporated.

JPI’s new twin fuel flow instrument, the 3.125-inch Fuel Scan 450M, will retail for $1695 when available. It features a larger LED format readout for the flow rate, as well as total fuel numbers. It has the same format as original 450, displaying the calculation in the lower window, including total fuel used for the left or right engine, fuel remaining and time remaining.

The FQ-400 is a 2.25-inch dual fuel level capacitance instrument, showing left and right tank fuel quantity. The price point hasn’t been finalized yet, and it’s intended to be a modern replacement for the older aircraft capacitive sensors.

Dean Sigler - January 17, 2012
0
Rapid strides are being made in the development of ultralight electric motorgliders. Dean Sigler talks to a few of the manufacturers at the forefront of this field.