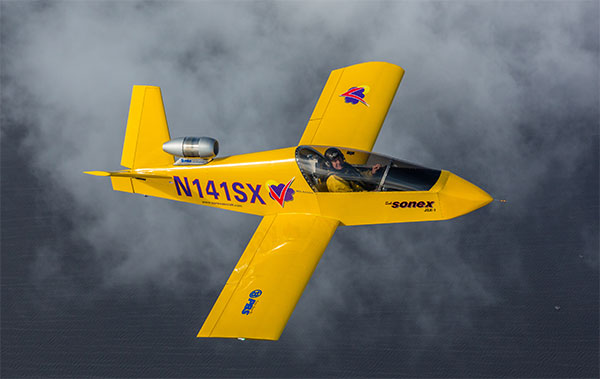 Sonex Aircraft, LLC announced that kit reservation deposits are now being accepted for the SubSonex Personal Jet. A $10,000 refundable deposit will allow customers to receive position numbers for the first kit deliveries, anticipated to begin mid-year, 2014. The introductory price of $125,000 includes the SubSonex Ultra-Quick Build Kit and the PBS TJ-100 turbojet engine with installation accessories. The price will be guaranteed for the first ten kit reservation deposit holders.

The single-seat SubSonex climbs at 1900 feet per minute, has a sea-level cruise speed above 180 mph, and stalls at 59 mph with full flaps. Range is over 300 miles with reserve. Empty weight is 416 pounds, useful load is 484 pounds, and the aerobatic weight is 750 pounds.

Under Experimental Exhibition category regulations, SubSonex customers will also have the freedom to take advantage of builder assist centers or aircraft finishing services to do the work for them.

“Experimental airworthiness certification under the Exhibition category is perfectly-suited to the mission of an aircraft like the SubSonex,” said John Monnett, Sonex Aircraft founder, president, and SubSonex designer. “There is no proficiency flight area required for aircraft in this group of the exhibition rules, and this is an aircraft that you’ll certainly want to show-off at organized events.” SubSonex pilots can either fly the aircraft cross-country to an event, or remove the outboard wing panels to transport the aircraft in a trailer.

The JSX-1 prototype is tentatively scheduled to fly on Thursday, August 1 during the afternoon airshow. John Monnett and SubSonex lead test pilot Bob Carlton will speak about the aircraft on Thursday from noon to 1 p.m. on the Phillips 66 Plaza main stage.