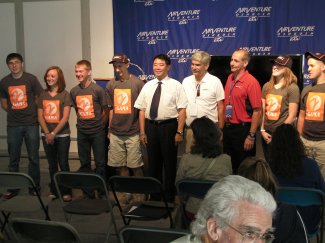 Glasair Aviation LLC was acquired in 2012 by Zhuhai Hanxing General Aviation Co. Ltd. (ZHGAC) of China and announced at AirVenture two recent projects: one involving Build-A-Plane, another that would develop a diesel option for the company’s Sportsman aircraft. The diesel project is meant to stimulate the company’s worldwide market and Glasair said it is working with long-time AirVenture vendor DeltaHawk on the task. DeltaHawk has had a moving target for certification since at least 2006 and in 2011 acquired $720,000 in low-interest loans from the state of Wisconsin. Monday at AirVenture, DeltaHawk’s Dennis Webb said that a test aircraft was approximately six to eight weeks from flying. Complications may arise. Meanwhile, Glasair’s involvement with Build-A-Plane has already seen success.

Through Build-A-Plane, eight high school students were selected as a result of their performance in a competition involving some 30 high schools. After selection, they participated in Glasair’s Two Weeks To Taxi (TWTT) program, and completed two Glasair Sportsman aircraft, mentored by Glasair’s standard TWTT support. Financial support for the experience was arranged by GAMA and its membership. After completion, each student had a chance to fly in one of the two aircraft that they built. Six of the eight students who participated were present at AirVenture and, when asked, most stated they intended to pursue careers in aviation or sought a pilot certificate. For more information on Build-A-Plane, visit Build-A-Plane online.

Dare To Be Bare

Bob Fritz - September 15, 2007
0
After checking with a variety of aluminum polishing aficionados, author Bob Fritz came up with a winning combination for maintaining the shine on metal airplanes. He details not only which products to use, but also how to use them for maximum effectiveness with minimal elbow grease.