Last month we talked about the light-duty wire Bowden control cables that the Creative Homebuilder makes. This month, we look at some heavy-duty versions for the throttle, propeller, and mixture controls.

He started by building a mock-up with a make-your-own (MYO) throttle quadrant designed for this specific installation. The core wire he used is 0.078 inch, and the spiral housing is correspondingly larger—large enough to allow a short, rigid, stainless steel sleeve to be attached to the threaded rod end and slipped over the first 2.5 inches of the core wire, ensuring that the exposed portion of the core wire between the threaded rod and spiral housing is supported and not subject to buckling under heavy load. 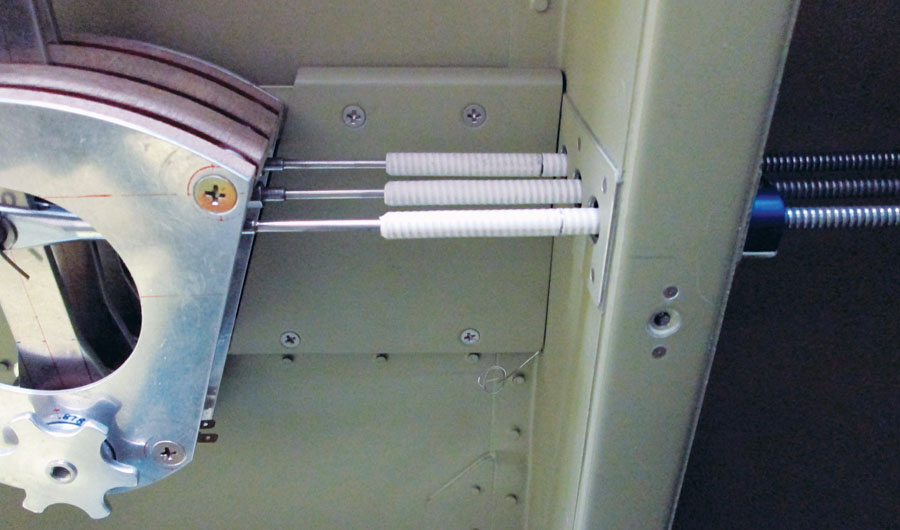 Mock-up of a heavy-duty wire control with MYO throttle quadrant.

The Creative Homebuilder tells us that this little addition makes these units very sturdy for the intended use. Initially concerned about fatigue where the threaded rod joins the core wire, he set up a little test to see what happened. First, he designed a cycle tester with the same operational characteristics that the throttle quadrant and the split clamp location would generate. Then he ran more than 100,000 cycles (more than five full 24-hour days) and reports that the test specimen showed no evidence that it had even been used. The stainless sleeve and the designed attachment to the rod end showed no wear.

Sleeve interface for heavy-duty wire control. The lower portion shows the two parts that make up the assembly.

The sleeve interface for the assembly comprises two parts: a precision-made, thin-walled (0.005 inch), 2.5-inch-long stainless steel tube and an MYO custom coupling nut made from 1/4-inch hex stock. The coupling nut is counterbored and tapped to a 10-32NF thread on one end. The other end is necked down and bored to accept the outside diameter of the stainless steel sleeve. The two pieces are then silver brazed together. With the excess solder bead blasted off, the result is a very nice, finished look.

The silver brazed joint between the control wire and the threaded rod end yielded at 960 pounds, an order of magnitude more than the Creative Homebuilder anticipates applying to the system.

When the sleeve assembly is slipped over the control wire, tightened onto the threaded rod end, and secured with red Loctite, the assembly becomes an integrated part of the control. The extra stiffness supplied by the addition of the sleeve over the otherwise exposed portion of the control wire is significant and assures the Creative Homebuilder that the system is appropriate for his throttle, propeller, and mixture controls. He is using the same sleeve arrangement on the “delivery” end of the controls’ installation. Of course, each cable will be a customized length to match its function.

Recognizing that the silver brazed joint between the control wire and the threaded rod end might provide a weak point in the system, the Creative Homebuilder performed a pull test to failure. He reports that nearly 1000 pounds of tensile stress were needed before reaching the yield point.