“Darned headset doesn’t work.” How many times have we all said that? Likely more than once, especially when the headset is your own and fixing it will cost a fair chunk of an AMU (Aviation Monetary Unit: $1,000).

Here is the answer, and if this project is too complex, then I give up. One battery, one capacitor and one resistor are the only parts needed. It really doesn’t get a lot simpler than this.

Perhaps it would be good to take one step back and see how we might approach this problem of the non-functioning headset. There are two basic elements to a headset: a microphone and a headphone. We’ll divide the problem into two parts. 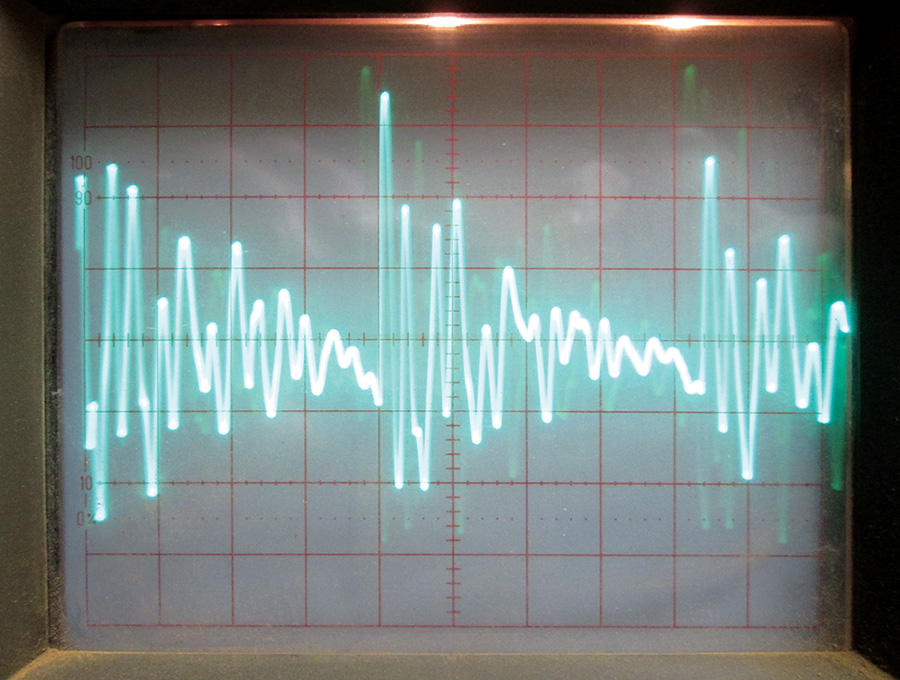 An oscilloscope presentation of the words “test, test” spoken into an aviation microphone.

Speak into the Mic

Why did aviation adopt this simple microphone design when there were already dynamic and condenser microphones? Well, for two good reasons. One is that dynamic and condenser microphones of the day were about the size of a softball or better. The other (and probably more decisive) reason is that the rapidly emerging telephone industry was standardizing carbon microphones for home phones and the little carbon microphone elements were cheap and widely available. Now I’ve never done it, mind you, but I have this friend Ernie who simply went to the nearest pay phone, unscrewed the mic housing, took out the element and replaced his defective aircraft microphone element.

What was the most common failure mode of the carbon microphone? Spit. Let’s face it: Some of us talk juicy, and when the droplets hit those carbon granules, they formed a type of carbon concrete and the microphone was said to be packed. Sometimes you could heat up the carbon sack and break the carbon back into “salt,” but more often the hammer that broke up the carbon also broke up the delicate sack that the carbon was enclosed within.

The microphone plug. The photo identifies the tip, ring and sleeve.

The headphone plug. The photo identifies the tip and sleeve.

Along about the 1970s, dynamic microphones—little speakers driven in reverse, where sound pressure moved a voice coil to and fro around a tiny magnet—were all the rage for the police and the firefighters because they really had no common failure mechanism, were rugged as all get-out and generally were far superior to carbon microphones. So why didn’t aviation switch immediately to this superior product? Because the police departments and the fire departments in a community could switch their radios whenever they wanted to use this style microphone, while aviation was truly a worldwide service that would have to switch all at once.

Parenthetically, this is why the whole communications world uses FM, while aviation is still stuck with the so-called “ancient modulation” (AM). Yeah, I know, you all say it is because we can hear weak heterodynes (squeal) with AM, while FM (and its modern cousin, spread spectrum) are all or nothing. Sorry, but in today’s world, that just doesn’t cut it. Running tens and twenties of watts with lots of receiving stations put that squeal so far into the background that it doesn’t make a bit of difference.

We also modified the condenser microphone into a snazzy little device called an electret. It uses the property of changing the space between a couple of pieces of tinfoil, which changes the capacitance, through a semiconductor sensor, to output a voltage.

It really doesn’t matter what your actual microphone element is; they all simulate a carbon element. That makes the job of testing the headset a whole lot easier. 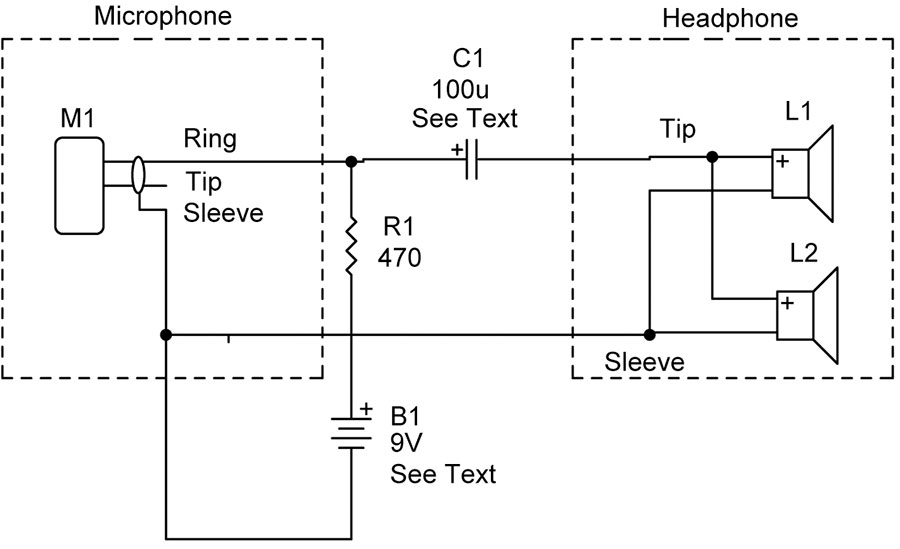 Now for the earphones, which truly are also right out of telephones of the 1920s and haven’t changed one bit in all that time. They are just tiny electromagnet speakers that push a voice coil in and out in time with the received audio. And, once again, back in the ’60s and ’70s, when one of the speakers went bad, we simply opened up a (ahem) “junk” telephone, stole the earpiece and repaired our headsets. At least Ernie repaired his that way.

How do we know that the microphone is putting out half a volt of audio? Simply running it directly to the headphones of that same headset through a fairly high-value capacitor allows us to hear ourselves.

How’s that for simple? A real headset tester for a battery, a resistor and a capacitor? Two bucks, tops.

If the audio is somewhat distorted with the battery connected, it should be. There is a tremendous mismatch between the microphone and the headphones, and this will cause a lot of distortion. This is a go/no-go tester, not one that will tell you the distortion level of either microphone or headset.

Simple, cheap and nearly foolproof. You can set it up permanently with mic and phone jacks, battery clips and all the rest of it for your local EAA chapter to use, and once again, you have become the electronics guru. Stay tuned for some more simple stuff like this in the months to come.