Liberty Landing International Airport was in turmoil. Of course, most of the time it’s in some kind of turmoil, but this was different. We weren’t digging a plane out of the crops after a groundloop or an engine failure. That kind of turmoil is pretty much an everyday event. This time the uproar was caused by the presence of a new plane on the field. 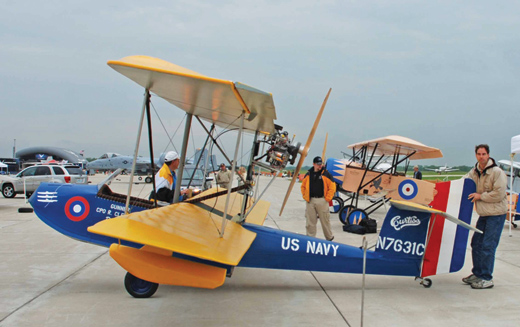 The “Seagull” got its first public exposure at the Salute to Veterans Air Show. Surprisingly, it is trailer friendly.

The arrival of a new plane is normally a time of intense interest from the airport bums who inhabit the field, not to mention the stalwart studmuffins (and studmuffinette) of The Kansas City Dawn Patrol. But this plane was a biplane and an amphibian. Well, gosh. That pushed the excitement factor on the field high above normal and approaching pandilerium!

Harvey Cleveland was finishing up the rebuild and modifications to his Mariner amphibian. He was getting it ready for its FAA inspection as an Experimental/Amateur-Built aircraft. His paperwork was ready. Weight and balance had been figured. The center of gravity numbers for empty, gross and minimum weights came out right where they were supposed to be in the envelope. The only thing keeping us from calling out our local FAA inspector was the aircraft registration, which we expected in the mail any day from the FAA’s main offices in Oklahoma.

A week passed, and no registration.

Then I got a call from Cleveland. The registration had been rejected because he had not printed his name after his signature. That was a bitter, bitter pill to swallow. The bottom line was that the certification process had just been pushed back two or three weeks. 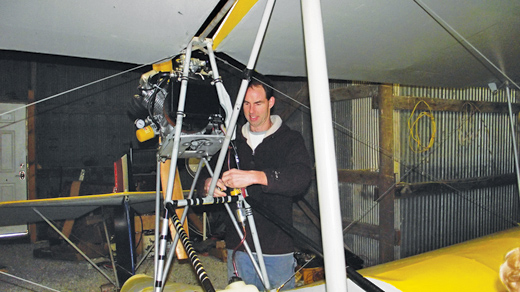 My wife, Sharon, and I were looking at the Mariner and thinking, which is always dangerous.

“You know, Sweetie,” Sharon said (she calls me Sweetie most of the time, unless she’s stressed, and then it’s not quite as endearing a term), “with a little bit of work this could be a unique addition to The Dawn Patrol. All it needs is a paint job and some decals.”

That night I went home and Googled WW-I flying boats and amphibians. Well, what do you know? Even as early as 1915 the U.S. Navy had flying boats. Cleveland’s Mariner, seen from, say, a mile away at midnight, in a dense fog, could easily be mistaken for a 1918 Curtiss MF Seagull Coastal Patrol Craft, particularly an “L.G.F.” version. Well, that settled it. We had a plan. Now, we needed to suck poor, unsuspecting Cleveland into the plot. We began to subtly weave our web of deception. 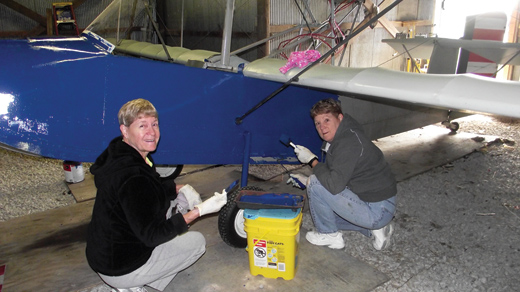 Sharon and I started by casually floating the idea. Now, Cleveland is young enough to be our son and is still a working stiff, putting in 60 to 70 hours per week at his job. Sharon and I are retired, so we volunteered to detail his airplane like a 1918 Curtiss Seagull if he would foot the bill for the materials. The labor would be free.

Well, wonder of wonders, he said yes! The excitement started to build.

We planned the details of the transformation: navy blue hull, yellow wings, elevators and stabilizer, and authentic U.S Navy 1918 roundels on the wings and fuselage. Appropriate decals were planned and sketched out on paper.

That’s when we discovered Cleveland had a maddening personality fault. We couldn’t get him to commit to anything having to do with the airplane. We’d show him a color scheme proposal. He’d look at it and say, “Whatever you guys think will look good is fine with me. You are the experts.”

He said that no matter what we showed him…every time! I was tempted to propose a pink plane with flowers and frolicking cherubs, but I knew I’d get the same reply so I just dropped it. Sharon and I finally decided on what we liked and got ready to kick butt.

Work began with a vengeance. As it so happened, Cathy Seybert, Sharon’s sister from Nashville, Tennessee, was staying with us for a week while her husband was off turkey hunting in the wilds of northern Missouri, so we dragooned her into helping with the transformation. (This happens to her a lot. I’m surprised she still wants to visit us.)

In just one afternoon, Sharon and her sister had the fuselage painted. It looked swell, and the next day they started on the tail surfaces and wings. We used Glidden Evermore High-Gloss Exterior Latex house paint for everything—on sale at Home Depot for $20 per gallon. 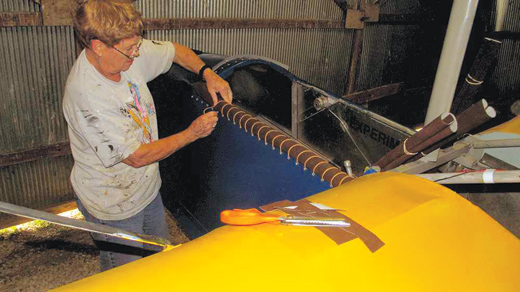 While the painting was going on, I designed the decals. Cleveland was coming in after work to install the new engine. He pulled the original engine and mounted a Valley Engineering “Big Bad Twin,” a 48-horsepower four-stroke, the same engine used on Sharon’s Airdrome Aeroplanes Morane-Saulnier Parasol replica that “Bullwhip” Baslee designed for her. It’s also the same engine we have on our Kolb Twinstar MK-II.

I ran into a snag on the decals when we started talking about the big roundels on the wings. The prices were way beyond reason. The wing roundels would have to be hand-painted with foam brushes and rollers; spraying was not an option.

Sharon, bless her heart, spent some real quality time lying on her back on the hangar’s gravel floor painting the roundels on the underside of the lower wings, while I installed the decals. Every so often a glob of paint would drip from the roller or brush and land on her face, or worse yet, in her eye. Cleveland and I learned some new words we’d never heard before.

When the plane was finally done it was a thing of beauty. The engine was all checked out and the registration came back the day after we’d finished all the painting and decals. 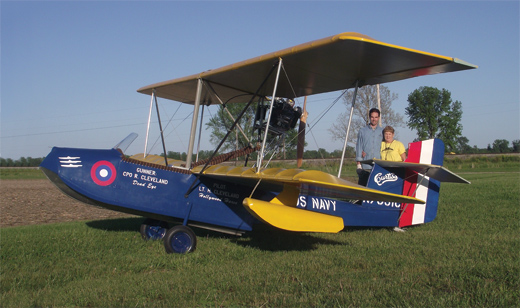 The finished thing of beauty. Cleveland and Sharon stand together by the ready-to-inspect Mariner.

The paperwork now completed, we put in a call to the Kansas City FSDO to arrange for the final inspection. We asked for our favorite inspector, Ernie Jarvis, an Air Force veteran who flies a beautiful Cessna 170B. He likes airplanes and messing around with Experimentals, too.

Another reason Jarvis is our inspector of choice is he’s one nit-picky, suspicious, beady-eyed son of a gun when it comes to inspecting our planes. That’s exactly what we want: A fresh set of experienced eyes looking over all our work is an added safety factor.

Everyone in The Dawn Patrol had been involved in the project in one way or another so we all went over that plane one last time with a fine-tooth comb. It was ready!

Now I know I shouldn’t have done this, but the day before the inspection I just had to stir the pot. I sent Jarvis this email at his office to prime the pump for the inspection. I also sent a copy to Cleveland.

We are waiting for you tomorrow. The 1918 Curtiss “Seagull” Model L.G.F. is ready!

We all went over it again today, and here we go. The Dawn Patrol gauntlet has been dropped at your feet! We triple-dog-dare you to find anything, anything at all on this absolutely perfect, pristine aircraft. So there!

You can leave your darn FAA-approved clipboard in your car. You won’t need it! Ha Ha Ha Ha! Come on, give it your best shot! (Better wear your spurs again.)

P.S. Do you want donuts or extra crispy chicken?

(Feeding the inspector is always a wise gesture.) 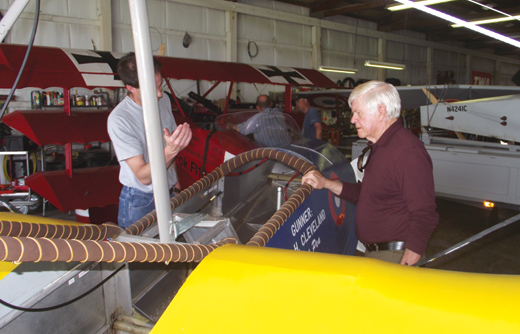 Ernie Jarvis talks to Cleveland about some features of the airplane. Dick Lemons’ Airdrome Aeroplanes Fokker DR-1 triplane replica and The Dawn Patrol’s Nieuports can be seen in the background on their trailers, ready to head for the Salute to Veterans Air Show at Columbia, Missouri.

We had everything laid out and ready to go the next morning. The hangar floor had been swept, the Nieuports pushed aside on their trailers. A table was set up by the plane, and the coffee was hot and ready. The “Seagull” looked fantastic sitting in the middle of the floor.

Cleveland had planned to take a long lunch and be there soon, but he arrived early, driving up in a cloud of dust. He jumped out of the car like a demented jack-in-the-box, eyes bugging out like a tromped-on-toad. He stalked into the hangar and headed my way.

“I can’t believe you sent Ernie that email!” he yelled. “What were you thinking?”

I just sat there and smiled a quiet, serene smile. This was getting better and better.

Then we heard another car drive up, turn off, and a door open.

Everyone’s pucker factor went up two notches. Having an FAA guy on your field, even one of the “good” ones, is always stressful.

Suddenly, Jarvis stood silhouetted in the door. He sauntered into the hangar, staring straight at Cleveland, who was frozen in place like he’d just seen Medusa.

Jarvis’s spurs made a jangling noise as he approached us. His eyes squinted and a sneer played on his lips (Clint Eastwood has nothing on Ernie Jarvis).

No one moved. No one wanted to be noticed. A few of us were sorry we were there. But not me, it wasn’t my plane. I was as safe as one of the barn swallows in the rafters getting ready to poop on the plane.

Jarvis started the inspection. He looked. He looked some more. He returned to the starting point and looked again.

Nothing. He was starting to get a little panicked when he saw it. His eyes gleamed in triumph. What had he found that we’d missed? Inquiring minds wanted to know.

Cleveland had put a jam nut on a bolt to keep the AN lock nut from going anywhere. The jam nut screamed “True Value.” Jarvis pointed out the offending nut with a smile on his face. Cleveland explained that he’d put the jam nut on as a “just to make sure” nut and didn’t care what kind it was. (In the interest of full disclosure, Cleveland is an A&P and IA, as well as a CFII.) Jarvis bought that excuse, and the physical exam was over.

The paperwork was next. It presented no problem, and so the inspection was complete. All was well. A few signatures, the specifications of the test area, a final handshake, and it was a done deal.

The newly christened airplane was pushed out of the hangar and prepared for flight. Cleveland climbed into the front cockpit and cranked up the mighty engine. They waddled out to the runway and after a quick control check, took off. No big deal. No side-to-side swerves. No bounding down the runway. He just took off, flew around the pattern for a few minutes and then brought it in for a nice one-bounce landing.

It was over. Ernie Jarvis shook the proud owner’s hand, said goodbye to the rest of us, got a going-away kiss on the cheek from Sharon, and drove off.

The next few days Cleveland really put the airplane through its paces, including water landings. His PIREP to Jarvis read:

I’ll have to get a shot of the Asian carp leaping out of the water while I was taxiing.

Thanks again for working me in so quick.

And so, reporting from Liberty Landing, the adventure continues. By the way, L.G.F. means “Looks good from…” You can fill in the rest yourself. 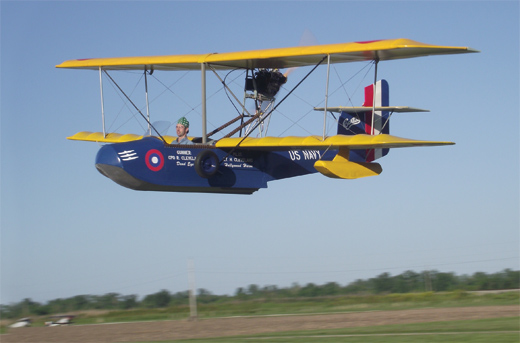 Cleveland makes a low pass with the gear retracted. No one is sure where he got the hat.