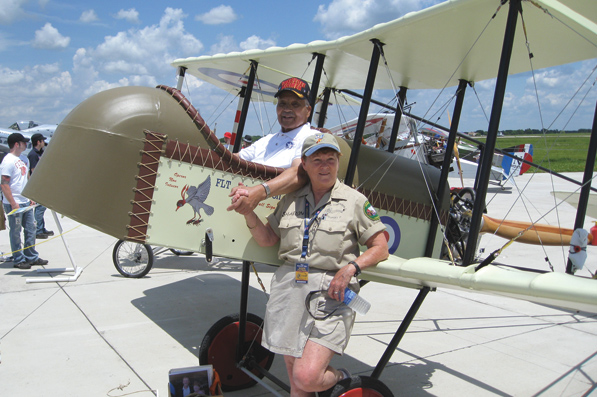 As I’ve said many times before and will keep on saying, building a scaled-down WW-I replica aircraft is probably the only way ole "Joe Normal" will ever get into anything resembling a warbird. When Tom Glaeser and I built our 7⁄8-scale 1916 Graham Lee Nieuport 11 replicas in 1986, they cost $2859 each.

Even now, 24 years later, you can still build a replica WW-I warbird for a surprisingly low price. Many scaled replicas can be built, if you’re careful, for less than five figures. When you finish your warbird and become comfortable with flying it, a whole new world will open for you. You’ll get more invitations to airshows and other aviation venues than you can possibly attend. A WW-I aircraft on the field is a people magnet. 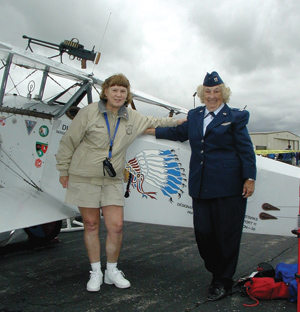 Sharon stands with WASP Mary Burch Nirmaier, a recipient of the Congressional Gold Medal for her efforts in the war. She passed away in August 2010 and was buried in her uniform with full military honors.

With the addition of Mark Pierce and Dick Lemons and their Graham Lee Nieuport replicas, The Kansas City Dawn Patrol was formed. Once word got around about us, the invitations started pouring in.

By far our favorite airshow is the annual Memorial Day Salute to Veterans held at Columbia, Missouri Regional Airport. This is the largest free airshow in the country, and its mission statement is: "To honor and remember those who served, those currently serving in our armed forces, guard, reserves and our allies." The Dawn Patrol first started going in 1992 and hasn’t missed a year since.

It’s at the Salute to Veterans that we’ve been honored to rub shoulders with some real American heroes and heroines. I’m talking about people who have made aviation history. A few of them really made an impression on us. First and foremost, I’ve never met a veteran that was "full of himself." They’ve always been humble, soft-spoken individuals, but getting them to relate their adventures is sometimes like pulling teeth. They don’t brag. They don’t strut. They thank us when we thank them for their service to our country. And they all have a sense of humor. 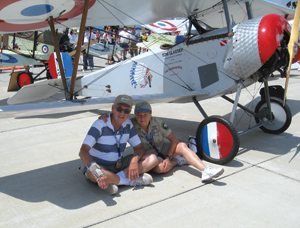 Sabre Ron and Sharon rest in the shade under a Nieuport 11 at the annual Salute to Veterans show.

One year at the show there was a reunion of the WASPs (Women Airforce Service Pilots). These women flew just about every plane in our inventory, ferrying them from base to base. Even more dangerous, they piloted planes fresh out of the factory for their first flights. I was signing one of my books for a little bent-over, blue-haired woman named Mary Burch Nirmaier at one of the show’s honored guest banquets. I asked her what she had flown. She tapped me on the chest and said, "Sonny, the B-25 was my airplane. I was the ‘five-cushion girl.’ I had to have three cushions behind me so I could reach the rudder pedals. The other two cushions went under me so I could see over the instrument panel." I asked her if she had ever ground-looped an airplane and, with a twinkle in her eye, she said, "Which plane do you want to hear about?"

Colonel Travis Hoover, the pilot of the No. 2 plane to take off from the deck of the Hornet in the famous Doolittle Tokyo air raid, sat in our planes and talked flying with us. His description of the lift-off from the pitching deck of the Hornet was so vivid that you felt like you were there beside him in the cockpit of the B-25 Mitchell bomber. He matched that event by moving into P-38 Lightnings and flying the Ploesti Oil Field raid. 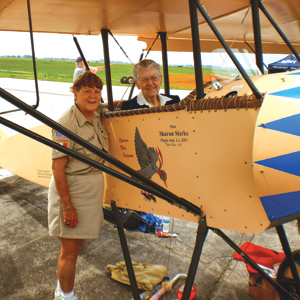 Colonel Charles McGee, past national president of the famous Tuskegee Airmen, has sat in our planes. He’s one of most entertaining gentlemen we’ve ever met. He flew P-51s in WW-II, F-80s in Korea and F-4C Phantoms for two tours of duty in Vietnam.

But little did we know that we had our own homegrown hero.

The newest member of The Dawn Patrol is Ron Sharek. "Ronnie" is my wife, Sharon’s, cousin. We ran into him at, of all places, a funeral. Sharon and I were sitting at a table having lunch in the church basement after the service. We were talking about flying our little warbirds when Ron walked over and sat down.

"I just had one rule I followed when I was flying," he said. "Landings equal takeoffs."

We asked for clarification. He told us he’d flown F-100 Super Sabre jets in Vietnam. It was difficult, but we finally got some details about his experiences over there. As he started sharing his history, Sharon and I were stunned into silence. Ronnie had flown 233 missions in the "Hun." His awards included the Silver Star, Distinguished Flying Cross with two oak leaf clusters and 13 air medals. The Hun was used mostly for air-to-mud (ground support) missions. He’d brought his plane back many times with holes in it that had not been there when he took off. 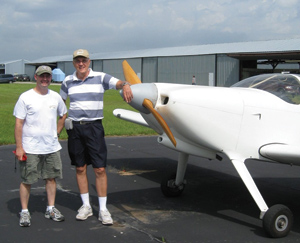 Dave Laur with Sabre Ron after their flight in Laur’s beautiful RV-6.

Anyway, we immediately gave him the call sign "Sabre Ron" and made him an honorary member of The Dawn Patrol. We got him an invitation to the Salute to Veterans show as an honored guest and anointed him with a job as "head of Dawn Patrol ground crew." He was so proud.

We’ve had a ball hanging around with him and hearing more details of his missions flying the Hun. As the stories rolled on we just sat there in the throes of blatant hero worship. I couldn’t believe a 23-year-old "boy" had done some of the things he’d done. Sabre Ron said he really liked the Hun. "You were never bored because it had so many novel ways to kill you," he said. "But flown in the envelope, it was a heck of a ground-support aircraft."

The Gardner, Kansas 2010 Gathering of Eagles was two weeks after the Salute to Veterans, and Sabre Ron showed up for that, too. At Gardner a future WW-I replica builder, Dave Laur, flew in with his beautiful RV-6. An ex-Air Force B-52 "naviguesser" (as he calls it), Laur is planning on building an Airdrome Airplanes WW-I replica in the near future using Robert Baslee’s builder-assist program at "Bullwhip Baslee’s House of Pain" in Holden, Missouri. 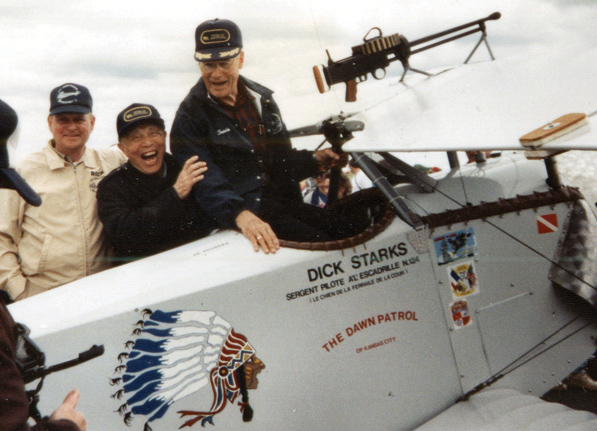 The author with Tung Sheng Liu and Col. Travis Hoover, pilot of the No. 2 B-25 to take off from the pitching deck of the USS Hornet on the famous Doolittle Raid on April 18, 1942. Liu guided the B-25 crew to safety, staying just barely ahead of the pursuing Japanese forces. Liu and Hoover maintained a brotherly relationship after Liu was made an honorary Doolittle raider after the war. Both men have since died. 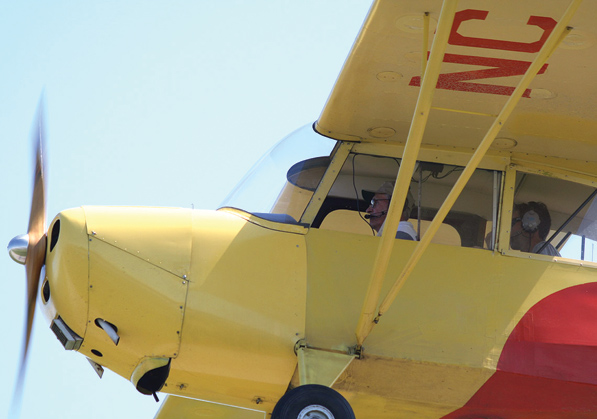 Harvey Cleveland and Sabre Ron on short final in the Champ about 5 seconds before the initiation of the newest member of the Ground Loop Hall of Fame.

We introduced Sabre Ron, and before you knew it, he was buckling into the right seat of Laur’s RV-6. As I was helping Ron get his straps tight he muttered, "Damn this feels good. The last time I got strapped in like this was in 1975." Then he added, "That was the last time I touched a stick." I was stunned.

Laur and Sabre Ron roared off into the distance. We could see the RV doing figure 8s in the sky and basically getting wrung out pretty good. Laur said that after about 5 minutes in the plane, he turned it over to Ron, and Ron was all over the sky having fun. Laur did the landing, but Ron did everything else. When they got out of the plane, it would have taken a surgeon to get the smile off of Ron’s face. 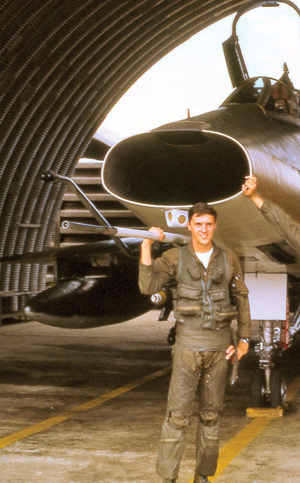 Not to be outdone, Harvey Cleveland asked Sabre Ron if he’d like to get some taildragger time in a ’48 Aeronca Champ, which was a no-brainer. Now, Cleveland is our umpteen-thousand hours CFI of choice at Liberty Landing. He also owned his own air-freight company. He flight-tests all of Bullwhip Baslee’s airplanes and is just a fantastic stick. To set the scene, Sabre Ron had no taildragger time. His first flight was in a Cessna T-37 "Tweetie Bird." The stage was now set for the birth of a new Dawn Patrol legend: "Sabre Ron Meets the Taildragger" or "The Ground Loop Hall of Fame Gains a New Member."

Ron was put in the front seat of the Champ, while Cleveland took the back seat. The prop was spun, and the engine started on the first flip. They waddled out to the runway and did the engine runup. Ron made the takeoff with some help from Cleveland. In the distance, we could see the Champ floating through some lazy 8s and steep turns.

Then it was time for the landing. Ron was on the stick. He’d been doing great, so Harvey was kind of relaxed in the back seat. The approach was fine, and the touchdown was OK, too. That’s when the whole event went south. The Champ made a little dart to the left when the correct move would have been to give the right rudder a quick "taildragger tap." Instead Ron gave it the classic "tricycle gear stomp," burying the right rudder pedal to the stop. Yee haw! Away they went in a tight circle to the right.

Harvey has told us many times: "Once the tailwheel gets outside the track of the mainwheels, you might as well hang on and just ride it out."

The Champ made a slow, graceful full 360 to the right, not even slowing down. Cleveland straightened them out, shoved in the throttle, and they took off again to make another landing attempt. This time it went just fine.

After they got out of the plane, Ron said, "You know, in the Hun, most of the time the rudder pedals were just a place to rest your feet. We hardly ever used the rudder on the ground."

Cleveland responded with, "You didn’t use it on the ground today either!" A roar of laughter came from the appreciative crowd who had been applauding the impromptu show. They slapped Ron on the back, shaking his hand and welcoming him to the exalted ranks of those taildragger pilots who have ground-looped and those who will…eventually.

When Ron headed back to St. Louis his last remarks were, "Now you guys know that I’m only a three and a half hour drive from Liberty Landing International, so if you guys are going to be doing anything, anything at all, call me and I’ll be there."

I believe Sabre Ron has rediscovered the joy of flight. And so the adventure continues.

Kit Stuff: As the Price Gets Bigger, the Avionics Get Smaller

Stein Bruch - July 27, 2012
0
With all of the ways to get GPS information into the cockpit, a handheld unit remains a viable option. By Stein Bruch.