As we have seen in previous months, the first step in the process of designing an airplane is to set the mission and performance requirements. The designer must ask and answer questions such as: How much (seats, payload)? How high? How fast, and how far?

Last month we took a look at cruise altitude. We now turn our attention to the question of cruise speed. As the racers’ saying goes, “Speed costs…how fast do you want to go?”

Nearly everything we do to increase the cruise speed of the design increases the cost and complexity of the airplane, and also increases operating and maintenance cost. 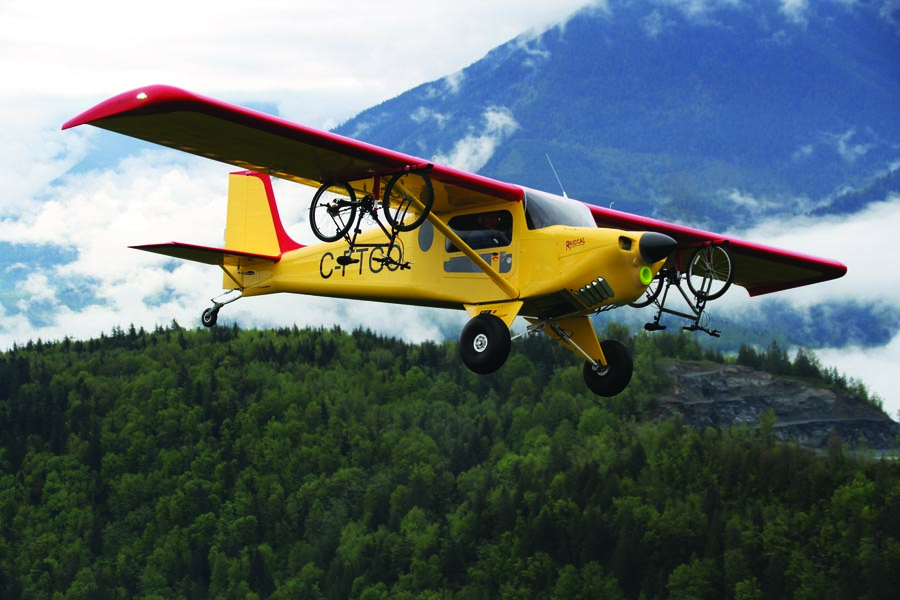 For slower airplanes (typically 120 knots or less), fixed landing gear and fixed-pitch propellers are the norm.

The faster the desired cruise speed, the more power the airplane will need for a given payload. As cruise speed increases, the systems also get more complicated.

For slower airplanes (typically 120 knots or less), fixed landing gear and fixed-pitch propellers are the norm. Airplanes in this class tend to have relatively low wing loadings and can get by with either no flaps or simple flap systems and still have acceptably low stall speeds. 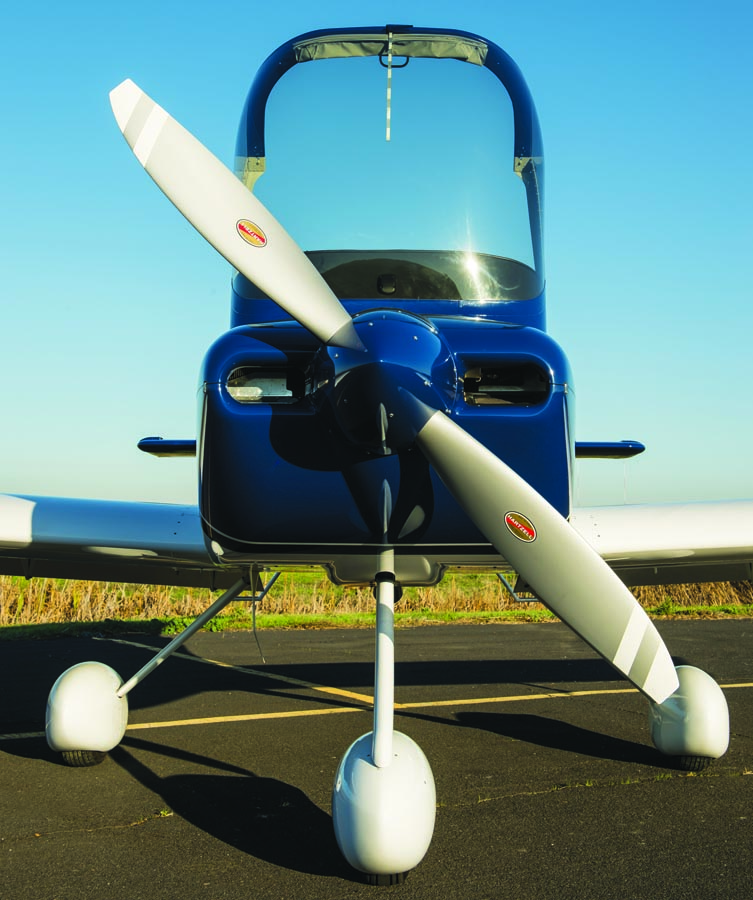 As cruise speed increases into the 140- to 160-knot range, it becomes increasingly difficult to define a fixed-pitch prop that is an acceptable compromise. A higher-pitched cruise prop will allow the airplane to reach its full cruise speed potential, but it will limit the rpm and power of the engine at lower airspeed. This will make the takeoff roll longer and reduce the rate of climb.

A lower-pitched climb propeller will improve takeoff and climb performance, but will allow the engine to overspeed at cruise, so it can’t absorb the full power of the engine at high airspeed. The pilot will be unable to get the rated cruise power out of the engine while simultaneously keeping the rpm within the engine’s limits.

While all airplanes face this problem to some extent, it gets worse as the airplane gets faster. For takeoff the engine and prop must produce thrust at low airspeed to accelerate the airplane to liftoff speed, and best rate of climb airspeed is significantly slower than cruise speed. The higher the cruise speed, the bigger the difference between optimal propeller pitch for these various critical flight conditions gets. At some point, the compromise in performance for using a fixed-pitch prop becomes too high, and a constant-speed variable-pitch propeller becomes necessary to get the full performance required of the airplane. Unfortunately, constant-speed propellers are costlier, more complex, more expensive to maintain, and heavier than fixed-pitch propellers. 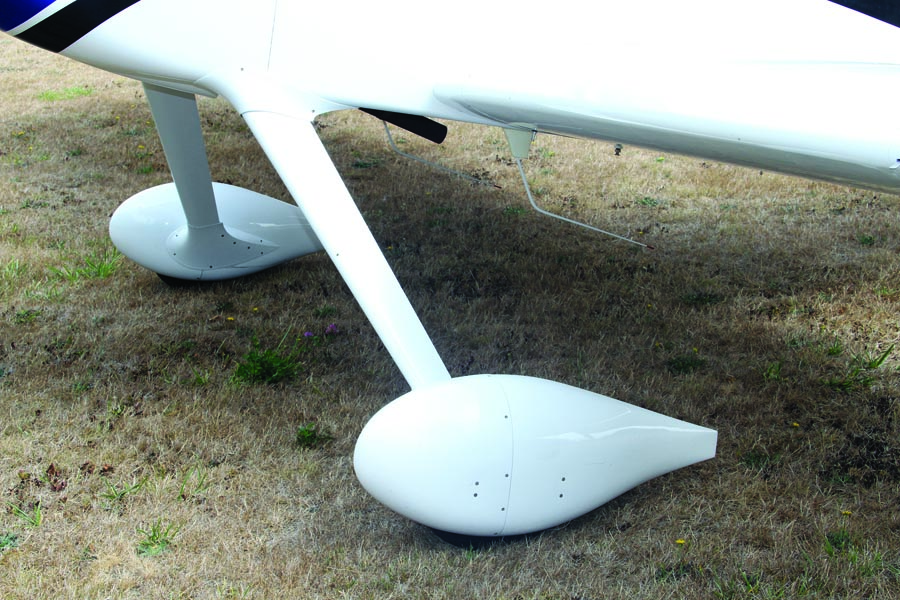 Well-faired fixed landing gear helps the RV-14 cruise at over 170 knots. You need to fly much faster before the extra weight, cost, and complexity of retractable landing gear is really worth it.

The next configuration break point comes at about 200 knots cruise speed. For speeds below this, the speed penalty for a well-faired fixed landing gear is small enough to be acceptable. It’s interesting to observe that light plane designers seem to have figured this out in the past decade or so. Among the traditional general aviation manufacturers’ product lines, we find quite a few airplanes with retractable landing gear that cruise significantly slower than 200 knots.

Perhaps the most extreme (to put it kindly) example of this is the original Aero Commander 112, which had a book 75% power cruise speed of 130 knots and a real-world cruise that was even slower, in spite of having 200 hp, a constant-speed propeller, and retractable gear. This is somewhat embarrassing when we consider that the contemporary Grumman-American Tiger carries a similar useful load at 140 knots on 180 hp with fixed gear and a fixed-pitch propeller.

More recently, the Cirrus line of airplanes, with cruise speeds ranging from 155 knots for the SR-20 to 183 knots for the SR-23, and the Columbia 350 and 400 (now produced by Cessna as the Corvalis), which cruise above 200 knots, have appeared with well-faired fixed landing gear.

The lesson from these airplanes is that you have to need to fly very fast before the extra weight, cost, and complexity of a retractable landing gear is really worth it. The speed penalty for the well-faired fixed gear is small, the owner doesn’t have to maintain the retraction mechanism, and the chance of an inadvertent (and very expensive) gear-up landing is zero. 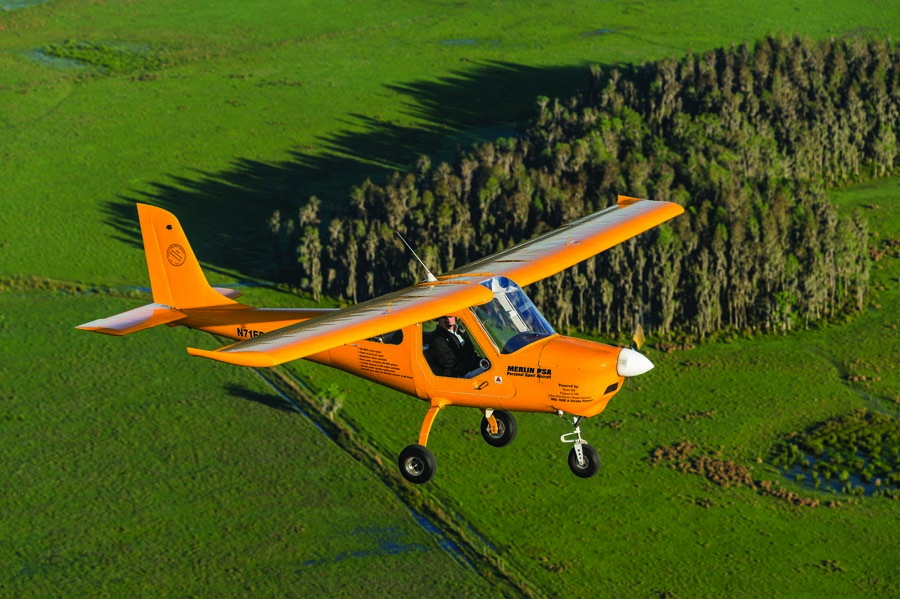 For slower airplanes like this Merlin PSA, wing loadings tend to be low enough that they can have acceptable stall speeds with simple flap systems or no flaps at all.

As cruise speed increases, the drag produced by wetted area becomes more and more significant. Since the size of the fuselage is determined primarily by what needs to fit inside it (crew, passengers, payload) and the need to provide a long enough tail arm, the designer has very little opportunity to reduce wetted area by changing the fuselage. The primary way to minimize wetted area is by making the wing smaller. While this does reduce wetted area, and hence parasite drag, it also increases wing loading. For slower airplanes, the parasite drag of extra wing area does not produce a large penalty, so they tend to have lower wing loadings than high-speed machines.

Higher wing loadings have the advantage of reducing the airplane’s gust response in turbulence as well as reducing parasite drag, but increasing wing loading also increases stall speed. This has several consequences for the design.

First, higher stall speed increases takeoff and landing speeds. Since ground roll for either takeoff or landing is roughly proportional to speed squared, increasing stall speed produces a rapid increase in the length of the runway needed to operate the airplane.

Safety is also an issue. Low landing speed is one of the key ingredients for safety in a forced landing. The kinetic energy of a moving object is proportional to speed squared. The faster you are going, the more energy must be dissipated in a mishap and the higher the loadings on the occupants in an impact. Crash survivability data shows that speeds above about 75 knots and uncontrolled impact with the ground, even at a shallow angle, are not likely to be survivable.

For ultralights and LSAs the stall speed requirements are relatively compatible with the other speeds they are regulated to. A Part 103 ultralight is limited to a maximum speed of 55 knots, and an LSA is limited to 120 knots. In both cases, a wing loading that gives the required stall speed does not severely compromise the ability to fly at the maximum allowable speed.

This is not necessarily true for airplanes certified under FAR Part 23.

For slower (less than 120 knot) airplanes, wing loadings tend to be low enough so that they can have acceptable stall speeds with either no flaps at all or simple flap systems. As cruise speeds increase and wing loading becomes higher, the airplane will require more effective and complex high-lift systems to provide enough maximum lift to keep the stall speed down to an acceptable value. For certified single-engine airplanes, stall speed must be below 61 knots. While Experimentals and homebuilts are not held to this requirement, safety considerations suggest that a significantly higher stall speed is very undesirable.

What we have seen so far is that as the design cruise speed increases, the cost and complexity of the airplane increases with it. As cruise speed rises from about 100 knots to over 200, the airplane goes from having a fixed landing gear, fixed-pitch propeller, relatively small engine (and fuel consumption), and simple or no flaps to needing a big engine, a constant-speed propeller, retractable landing gear, and a sophisticated flap system. Each of these steps costs, so it is up to the designer to make informed decisions about whether the change in speed is worth the change in cost.

Next month, we will tackle this question with a look at how time and distance affect the need for speed.

Deciding What to Build