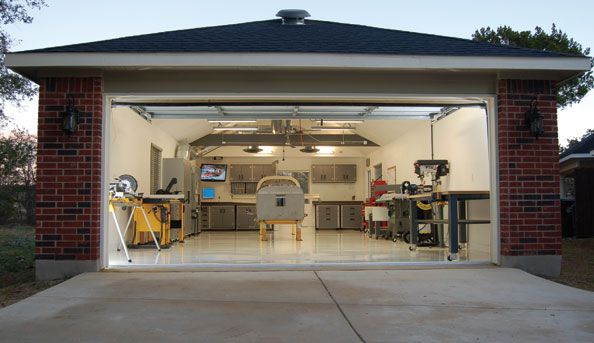 The deal was simple: She would get the outdoor kitchen of her dreams, and I would get my dedicated workshop. It was early 2008 when we finally decided to leave our hometown of Fresno, California, and pursue a better life for ourselves in the Promised Land known as Texas. Like most kit aircraft builders, I dreamed of living on an airpark. We had looked at many in the San Antonio area, but none of them really fit our taste. The challenge before me was the same one that faces many of my fellow builders: How could I create an effective working space at my residence for building my plane without the luxury of a dedicated hangar space?

The shop I wanted to build would have to be no larger than 20 feet by 40 feet. These are not the optimal dimensions for building my plane, but it’s what fit on our one-third-acre lot and what matched the style of our home and neighborhood the best. I knew I could overcome many of the size limitations by building my spaces smarter.

The goal was to be organized and use the vertical space of the shop rather than floor space when possible—after all, in a 20×40 shop, you won’t have a lot of floor space to give away. I knew in order to compensate for the deficiencies of width I needed to vault the ceiling, but I also knew I must not waste all my vertical space with a vaulted ceiling. We finally decided that I would make a third of the workshop with an enclosed attic for storage. I put the vaulted section over the primary workspace to make it feel bigger and more open, and the attic section toward the front of the shop where an 8-foot ceiling would not feel so closed in because it is next to the large garage door.

My wife, Melissa, is an aspiring interior designer, and she helped me plan the space. We wanted to go for a clean, industrial look by adding aesthetic interest on the ceiling such as exposed beams, rigid metal electrical conduit, metal ceiling fans and commercial spiral ducting. However, for everything below the ceiling line we wanted it clean and sterile: white walls, white floor, electrical inside the walls, lens covers on lighting and no exposed shelving.

The first lesson I learned from my old shop was that I could never have enough electrical outlets. So for this shop I decided to put in a 125-amp sub-panel with outlets throughout the shop at about 4- to 6-foot intervals. I also put in 220-volt, 60A service in case I needed it in the future. It’s much easier installing service while you’re building than after the structure is complete.

In addition, I put two electrical-cord retractable reels on the ceiling at each end of the shop to avoid cords running along the floor. In addition to electrical, I wired the building for TV, telephone and computer network.

My next concern was adequate lighting. I installed large 4-foot windows on three of the four walls and three skylights in the ceiling. It was quickly apparent to me that the skylights would provide too much light and heat at certain times of the day during certain seasons—this is Texas, after all—so I purchased some specialty shades that slid in rails and were made just for the skylights.

Next was the non-natural lighting. I split the lighting into three switched zones with the front and middle zones being T-8 fluorescents and the rear being a softer T-5 fluorescent. The middle section lighting would be in the vaulted area, and to contribute to the industrial look we chose hanging, non-diffused lights and hard-wired them with flex tubing to the exposed metal electrical conduit. The lights in the rear of the shop are mounted on the beams and at the rear, far down from the sides rather than the bottom, making the space feel more open and maintaining the slope of the hip roof for visual appeal.

For climate control I chose to use a heat pump, which has a condenser on the exterior with an air handler on the interior. The choice for a heat pump was primarily due to the lack of natural gas in our neighborhood, and it is convenient because it provides both air conditioning and heat in one package. My last shop used a mini-split system that worked well, but it would not be as effective for a space this size.

In my last shop I had used the three-stage epoxy paint that you can purchase at Lowes or Home Depot for garage floors and apply yourself. It required liquid etching of the concrete, priming and then painting. It looked nice but was not extremely durable and began to chip after a couple of years. This time I decided to go with urethane and have a professional do it. It was a great decision. The difference in quality and durability is noticeable. The price for the urethane was about $2.60 per square foot, and the process was similar except instead of liquid etching the concrete they used a large grinder. The finished product is glossy and bright white and really helps balance and reflect the light throughout the shop.

The benches along the back of the shop were created by welding 1.5-inch square tubing frames and painting them black. I screwed pre-fabricated laminated counter tops on top of them and slid Coleman cabinets in below. I purchased the counter tops and cabinets at Lowes. I opted to fabricate a built-in whiteboard over one of the benches; it spans the distance between the top of the counter and the bottom of the cabinets above it. The whiteboard is made of tile board also purchased at Lowes and framed with painted molding. The built-in whiteboard gives more of an integrated look at a fraction of the cost while providing a larger space for writing than I would have had using purchased whiteboard.

I also implemented several other improvements based on lessons learned from my past shop and other builders. For hardware storage I have used a combination of wall-mounted bins and custom fabricated racks. The storage bins on the wall are numbered with a parts reference list on a clipboard hanging next to them. The reference list is sorted both by bin number and by part number, making it easy to quickly find what I need. The racks that you see in the cabinets were custom fabricated using half-inch steel tubing and sized to fit the clear plastic storage containers that are sold at Walmart for fishing tackle (Harbor Freight also sells them). The containers are cheap, and with their removable dividers this is a great way to store all sorts of stuff. I created racks for both the larger containers and the smaller ones and bolted them to the wall inside certain cabinets.

One other thing worth mentioning is the computer setup. Like other builders, I have found that scanning in my instruction manual and plans has greatly increased my productivity and reduced frustration. However, I really did not want to have a dedicated laptop in the shop like I did in my last house, nor did I want a full PC setup that would collect dust and be exposed to the elements in a workshop, so I found a nifty solution called a ChipPC.

The ChipPC is a small solid-state thin client. With no moving parts or hard drives it’s small enough to fit into a junction box in your wall where you would normally have an electrical plug or light switch. It was the perfect solution, and it required only a network connection, so I had fewer cables to contend with. It connects to another PC (in my case, my primary computer inside the house) and displays that computer’s desktop as if I were sitting at that machine. Think of it more as a window to a PC rather than an actual PC. All the speed, applications and resources of my primary computer are now available to me in the shop with none of the additional expense or maintenance requirements. Lastly, I scanned the parts manual and plan drawings into searchable PDF files so that I could easily find any drawing or reference to a specific part using Adobe Acrobat Reader.

Now that the shop is completed, it is time to start making some progress on my too long neglected RV-7A project. Oh wait…I guess I need to first make good on that promise I made for an outdoor kitchen.