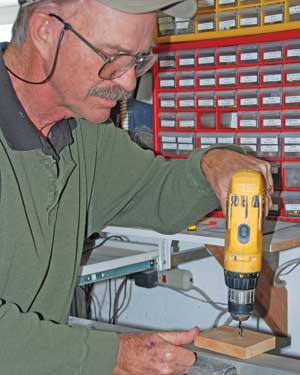 To the left-right, alignment is easy, but its very difficult in the axis to and away. Thumbs are sensitive to the lift of any tool

If you’ve been presented with a project of, say, 10 pieces with 10 tapped holes each, you may have considered mounting the tap in the drill motor and just letting the tap pull itself through. You might even have had some success but still felt uneasy about going this route. This sense of unease may have been borne out when you broke the tap, flung the part across the shop and taught the neighbor kids some words they wont find in a textbook.

Well, you were close. The motor obviously has the torque, so what went wrong? Start by looking at the nature of a tap. It has to be made of an extremely hard material if it is going to cut threads and not be made useless after one use. With that hardness, however, comes brittleness. Cut a notch in any material, and it wouldn’t be surprising to see it tear or break at the notch. Now look at your tap and you’ll see that the bottom of each thread is a notch. Obviously, alignment of the tap to the drilled hole is critical, and thats hard to do in the axis to and away from you. 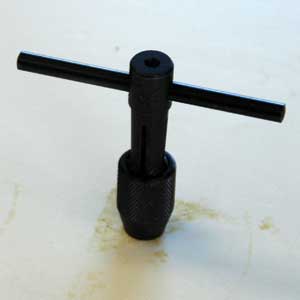 The typical tapping handle has a dimple in the top end.

If this is a project that fits on a drill press, assuming you have one, you may have tried that route but were defeated when you realized the drill press doesn’t have a reverse. Why a drill press does not but a drill motor does escapes me.

Lets solve the alignment problem first, and then work on the speed.

If your tap has a center point in the end of it, you’ve got it made. Or you might have a tap handle with a center point and enough length to put that in the drill press. You had the part clamped to the drill press table, so lets leave it clamped, remove the drill, insert a short countersink, place the handle, mount the tap in the hole and bring down the countersink to just touch the center point. Now apply a light downforce on the drill-press handle while turning the tap by hand. 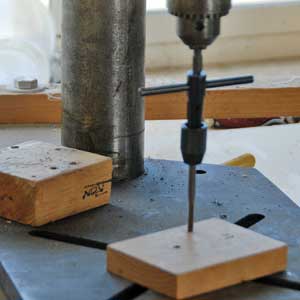 The author mounted a small conical deburring tool in the press and then allowed it to engage the dimple in the handle. If the part were clamped to the table, this would be an ideal way to maintain vertical alignment with the drilled hole.

Its effective and accurate but horribly slow. Clearly the pros are not doing it this way, so lets try something else.

You might have seen or heard of tapping heads and been tempted to buy one. First off, there are two types of these tools. They look alike, so follow closely before you whip out the credit card. The first of them requires that the drill press/milling machine be put in reverse, while the second has a reverse gear set built into it.

The tension/compression tapping tool. When hand-tapping you push down while rotating without much conscious thought as to how much force to apply to either axial or rotational forces. All of your concentration is, or should be, on alignment. Once the cutting starts, the rate of progress into the stock is controlled by the pitch of the threads and the speed of rotation. 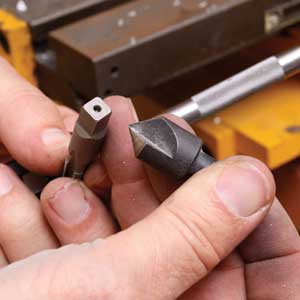 You can now mount the tap in the tapping handle.

The feel of this is mimicked by the tension/compression tapping head. Inside the 3-inch long, 2-inch diameter body of the tool is a coil spring whose upper end is attached to a shaft that fits into the chuck. The lever end has a fitting to accept the tap. You control the spindle speed and feed as close as possible to that needed by the tap, while the coil spring both controls the pressure of entry and allows the tap to rotate a bit faster or slower as needed by the conditions. Ingenious! But it doesn’t work too well on a drill press-no reverse, remember? The better versions have a clutch that allows the tap to stop turning when it hits bottom. Granted, the spring will allow some latitude for bottoming out, but it still is a bit of a guess.

The problem is not much easier on a mill. The only significant difference, other than reversing, between a mill and a drill press is that the mill will move laterally, and thats exactly what we don’t want. 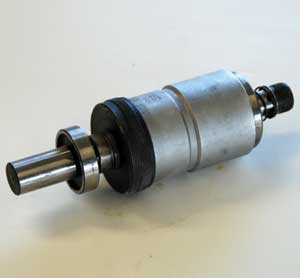 A tapping head. The left end is a special appliance made by Tormach that allows the tool to be placed in a milling machine and achieve the exact height extension every time. If this were the auto-reverse tapping head, there would be an 18-inch bar mounted perpendicular to the axis of the tool.

The self-reversing tapping head. Where the tension/compression tapping head is a clever device, the self-reversing tapping head is a complex and even cleverer tool. Envision the same 2-inch diameter, 3-inch long cylinder with an 18-inch long bar extending radially. Mount your tap in the bottom of the cylinder and then place the tool in the drill press. With that long bar resting against the drill press such that it cant swing in a clockwise direction (but can move down with the tap), set the speed of the drill press to the slowest setting. Center the material under the tap and with the press motor turning, lower the tap to contact the drilled hole, and as it starts cutting, continue to lower the tool. Easy so far, and then it gets amazing. Just before you reach either the end of the tap threads or the bottom of the hole, reverse your down pressure. Instantly, the tap stops its clockwise rotation, reverses and starts coming out. No drama, nothing flashy, it just reverses. 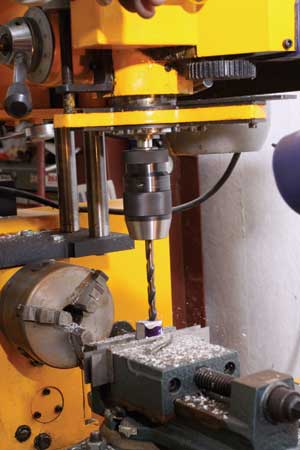 Keep the carriage locks down tight. You want to keep this X and Y position throughout this process.

If you had looked closely you would have seen the tapping head rise a bit just before the reversal occurred. Therein lies the secret of the self-reversing tapping head. Inside the cylindrical body of the tool are gears that drive the tap either clockwise or counterclockwise. Controlling which of the gears is active is a plate with ball bearings. The default position has the gears being driven clockwise. With the tap captured in the material, a lifting motion by you moves the plate out of that position, through neutral, and engages the gears powering the counterclockwise motion. When you installed the tap, you may have noticed that pulling on the tap would move it out of the cylinder a quarter-inch or so and thought it odd, maybe even defective. Now you see that its the key to the gee-whiz operation.

As in all things, performance comes with a cost. A tension/compression head can be found for less than $150 but cant be used on a drill press. An imported auto-reversing head will command double that, and a top of the line reversing head will put a near $1000 dent in the credit card. But the more you need it, the more the cost of it is returned by the speed of operation. Oh, and they’re fun to watch! 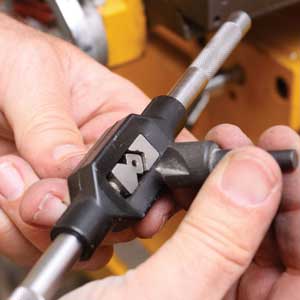 It is tempting to mount a tap in the drill chuck. But that method is very slow because you have to turn the motor and all of the gearing by hand. Do not under any circumstance turn the motor on and power your way down. I guarantee that you will break the tap and want to fling the part across the shop.

A Cheap and Easy Way

What if your parts wont fit in a drill press/mill? Ah, heres the way to do it even on a curved surface or while lying on your back inside the fuselage.

Lets start with a scrap of half-inch-thick wood that you can conveniently hold in one hand. On the drill press drill a hole through it using your tap-drill. That hole is now perpendicular to the bottom of the tool. Mark it as being a tool, perhaps writing the tap size on it.

To use it, place it over the location of your to-be-drilled/tapped hole, and then drill the hole in your part. If you move out of alignment, you’ll see or feel the tool lift off the part. Now grab the tap/electric screwdriver and again go through the tool and into your base material. Youll be pleasantly surprised how much it helps in keeping your drill and tap perpendicular to the material. 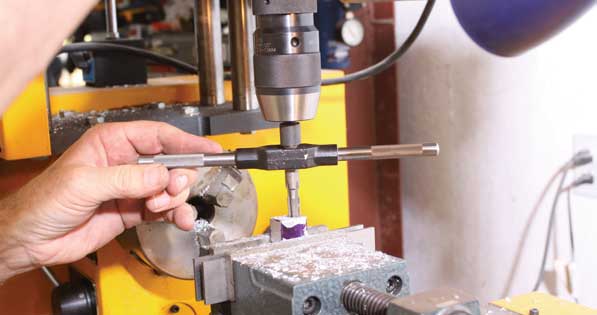 The author mounted a deburring tool in the drill press and then, holding the tap against the deburring tool, brought the whole thing down so that the tap just touched the drilled hole. Only the lightest pressure is applied by the drill press handle, just enough to keep the tap and handle in position. While holding that pressure gently, turn the tap a half turn, and you should feel it start to cut material. Now release your pressure on the drill press and turn the tap in the reverse direction. This is to break the chips so that they don’t overload the tap and break it. One turn in to get started, a half turn out to break chips, 1.5 turns in to cut more chips, one half turn out to break those chips. You will get the feel of this quickly. Only two threads will be needed before you can let go of the drill press down handle and use the threads to pull the tap down into the material. 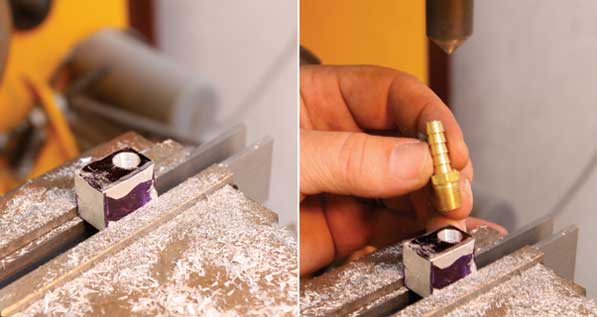 Keep the carriage locks tight so anything placed in the chuck is on that same centerline. Maintaining a slight downward pressure at all times makes sure that you start straight, and you don’t put any side loads on the tap. To cut steel, the tap must be extremely hard, which means it is also extremely brittle, and may break easily under side loads. 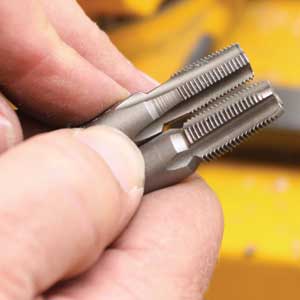 You may have seen these without realizing that they are pipe taps. That is another subject for another time. Just know they do not have any use with an ordinary bolt.

The hardest part of this method may be finding a three-jaw chuck for your screwdriver. Try hobby shops and tool sales stores. Ive had great success at this with tap sizes under #6 working on eighth-inch aluminum. For larger screw sizes you can do this with a larger drill motor set to slow speed, but you’ll need to keep a hand on the tool to feel for any lift. If you have a drill motor with a clutch mechanism, turn it to low and work your way up to a setting that just drives the tap. Then, when it bottoms out, you’ll be able to stop in time to save the tap and your work piece. Now go practice on some scrap and prepare to be amazed.

Mel Asberry - November 18, 2008
0
This month we address the question of where flight-test areas may be and how they may be structured;

Dean Sigler - October 14, 2011
0
Dale Kramer invigorated the ultralight movement in the 1970s with the Lazair. Now he's doing it again-with a battery-powered version. By Dean Sigler.