Tokyo University of the Art professor Kazuhiko Hachiya watched flights of the Mehve, an imaginary aircraft in the Japanese animated film Nausicaa of the Valley of the Wind, and decided that he wanted to fly such an aircraft. A decade-and-a-half later, his dream came through and you can watch him do it today (Wednesday) night at 7:30 pm. The flight is scheduled to occur at the start of the evening airshow.

Hachiya designed the project and is the only pilot to fly the resulting “Open Sky M-02J”. He started with a hand-launched, scale model to test the airfoil characteristics. Once he was satisfied with the basic design, he partnered with aeronautical engineer Tota Ueno of Olympos Company in Tokyo to scale up to a glider capable of carrying one person…Hachiya himself. The glider, first flown in 2006, was launched from the ground by teams of people pulling a bungee cord. Once satisfied with its flight characteristic, Hachiya and Ueno worked to find the “right” engine to add as the powerplant. Between 2010 and 2013, they were doing high-speed taxi tests and working through issues…particularly powerplant and regulatory issues. They ultimately decided to use the NIKE jet engine made by AMT Netherlands which produces 176 pounds force. The jet was designed and mostly used in target drones.

To date, Hachiya has made about 150 “jump” flights and 70 circling flights. He has flown it up to nearly 500’ agl but believes it can fly much higher. (Airspace restrictions in Japan have prevented him from trying to fly higher.)

You can see the jet up close in the Homebuilder’s Pavilion, across the aisle from Paul Dye’s SubSonex jet, Loki. Hachiya and Ueno are often there to talk with visitors about their creation. While interviewing them there and learning of the weight-shifting control for pitch and, more specifically, the wing-warping control of roll, I realized they had tapped deeply into the Wright Brother’s 1903 legacy and suggested a trip to the National Park Service’s booth in Hangar D, where they operate a simulator of the craft. We walked over and both men tried it. I think Hachiya found the 1903 plane more difficult to control!

While Hachiya and the jet flew at Oshkosh last week, their performance on Wednesday night will depend of calm weather. Headwinds must be under 10 knots and crosswinds need to be no more than 6 knots. Fingers crossed for a clear and calm evening. 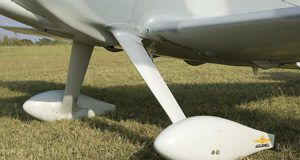