We all know a bolt when we see it…or do we? For that matter, whats the difference between a bolt and a screw? It turns out there are several official definitions, no two of which seem to agree, but all gravitate to size, with bolts generally being larger than screws. Another way to look at it is that bolts usually require nuts, and screws are often threaded into another piece, though that piece might well be a nutplate. (When is a nutplate not a nut?) You see what I mean.

Let’s look at the history of this mess and just maybe your karma will calm. You know of ASME threads such as -20, and metric as well, such as M6-1.5. You might even know of Whitworth, but are you familiar with Sellers or Franklin thread forms? You might be tempted to think that Acme threads are something the Road Runner used in his wild machines to defeat Wile E. Coyote, but, no, they’re the square-shaped threads you see on a lathe leadscrew. 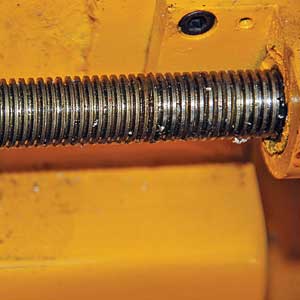 An Acme thread is easily identified by its square form; that is, the opposite sides of a given thread are not angled so that they could come to peak. This allows the thread to exert equal forces regardless of direction of rotation. Also note the tiny chips that will cause wear.

So our ubiquitous favorite we call -20; what does that mean? First, ASME stands for the American Society of Mechanical Engineers. Oh, and these fractional ranges are sometimes called American, Imperial and even SAE (Society of Automotive Engineers). But the means just what you think; put a micrometer on it to measure the size of hole the threads would fall through and you get 0.25 inch. The 20? Twenty threads per inch, TPI. Well come back to that later.

Thats sensible, but what about its smaller brethren, 4-40 and 6-32? Again the second number is a TPI designator. But that first number is where you might want to have a headache pill handy. It starts in Great Britain in 1897 with the invention of the modern lathe by Henry Maudsley. Bolts were easy to make, but everybody had their own ideas as to form. Several attempts at finding the best shape and then standardizing it came to fruition, with each adopting something from its predecessors. In 1907, the ASME shouted down this bolt du jour approach and established what we use in the U.S. today. However, a conciliatory policy incorporated gauge numbers from 0 to 300, no fractions or decimals. To that, stir in diameter increments based on a ratio of the pitch (crest to crest distance) as a function of Sellers bolt radius at the top or bottom of the thread. That ratio worked out to be 0.013-inch increments for each number size increase; for instance, the diameter difference between a #4 screw and a #5 (there really is one) is only 0.013 inch. 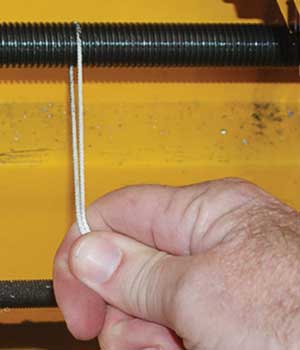 Cleaning a thread is easier with a string soaked in solvent. Note that the string is not wrapped around the authors finger. Also, hes holding it with his right hand while keeping his left hand on the stop switch in case the string catches and starts reeling him in like a fish.

Then to really cement this as a two-pill idea, the ASME made the starting point a mere 0.060 inch for a number 0. Had that system been fully adopted, a -13 bolt would be a 33-13, and this would continue up to a bolt about 4 inches across. Thankfully, or perhaps not, the system stops at 10 and then goes fractional at inch. There’s an old saying that, Two things you should never watch being made are sausage and legislation. To that I would add standards based on arbitrary numbers such as the length of the kings foot, which is where we got that measure.

This approach came to a halt with the advent of the metric system, but similarities remain. Look at an M6-1.5 screw and you see M is for metric, 6 is the major diameter, but 1.5 is the distance between the threads measured in millimeters. There’s the big difference then; ASME measures threads per inch (TPI), while metric tells you the pitch. 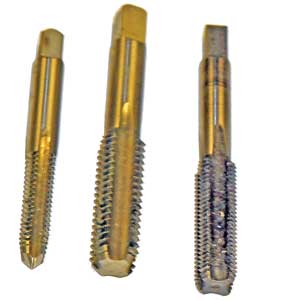 Compare the bottom ends of these three taps, and you see that the taper or lack thereof identifies them (l to r) as a taper, a middle and a bottoming tap. They’re different sizes, but you get the idea.

Better still, Id suggest buying a set of metric and ASME gauges. There are several on the market but www.boltdepot.com/thread-gauges.aspx has what appears to be an acceptable version for less than $2.

What tap or die to use? If the choice is wide open, its pretty simple. For strength, you want a minimum of three threads engaged. For thin material, go for finer threads. In general, though, coarse threads are more common.

By now you’ve seen drill-tap charts that state Drill size to yield 75% threads. This percentage is indicative of how much of the thread height is actually formed; if the threads came to a sharp peak, they would be 100%. To do that, the drill would need to be smaller and the tap would have to do more cutting. The result of that, in turn, would be that the chips from tapping would be larger and more likely to jam the tap and break it-strike one. Sharp peaks would be susceptible to damage-strike two. Finally, anything more than 50% does not add to strength-and thats strike three. 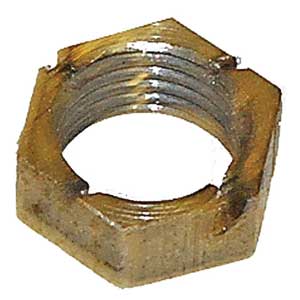 A homemade die. Steve Loree of Loree Air made this for a from-scratch fabrication of a gas tank for a Beech 18. Nothing else was available and he needed it only for a single use in aluminum. Start with a nut, cut a series of small slots to form cutting edges with a die grinder, and you’re in business.

Inch as Good as a Mile

Another heading you might see is clearance close/wide. If you’re exactly confident of the alignments and position, use the close clearance number. Got a bolt pattern? Use the wide clearance drill. Both values will allow the bolt/screw to fall through without turning, but the wide value allows a bit more latitude, which will still stop the head of the screw without going to body washers.

The variety of bolt sizes is exceeded by the designs of taps and dies. You might have a set of taper taps and fixed dies. Those are most common, but you can go to the local hardware shop and frequently find bottoming taps. Taper taps help align the tap with the hole but cannot cut to the bottom of it. There are intermediate taps that are halfway between these for really difficult materials. For high-speed machine tapping you might find spiral taps and…now my head starts to hurt. 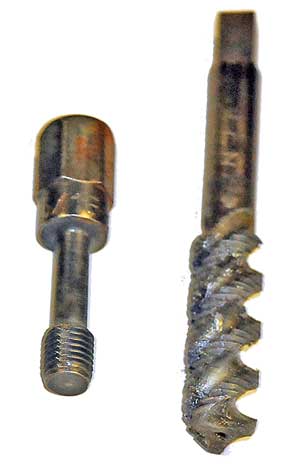 Opposites! On the left is a thread chaser that does not cut material so much as it simply reforms damaged threads. On the right is a spiral tap. The leading end is not tapered and is, therefore, best used on computer controlled mill/tapping machines. The spiral helps break and extract chips, obviating the need to turn one turn in followed by a half turn out.

You older machinists probably have a set of adjustable dies. These are split into a C shape with a screw to reduce the diameter of the finished threads. But I also wanted to expand on the subject of actually cutting threads, so heres a dandy little tool to make it easier to get that tap started straight in the hole. It’s a simple block of whatever is handy. Size the block thickness to about the length of the screw and as large as can be conveniently placed flat over the surface around the hole. This assumes that you’re working on a flat surface, of course. Now drill a hole that just allows the tap to slip through. Place the block over the drilled hole and against the surrounding surface. Turn a half turn or until you feel the tap bite. Once it starts to cut, break/clear the chips by going a turn in and then back out a half turn. The purpose of the taper is to help you with a straight start, but this will be useful for some of those inconvenient or hard-to-reach areas.

Finally, the Stanford tables offer really useful information for selecting the right drill for a specific tap when working in several different materials. My thanks to Stanford University for providing this information, also available at www.stanford.edu/~jwodin/holes.html. Check it out. 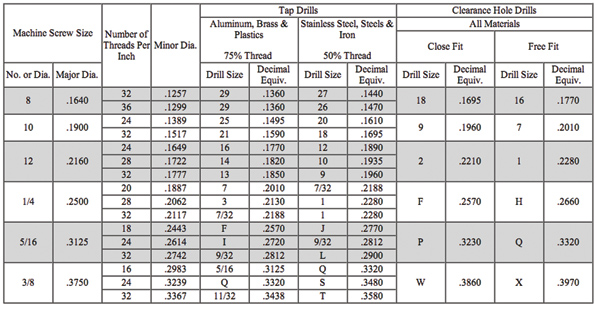 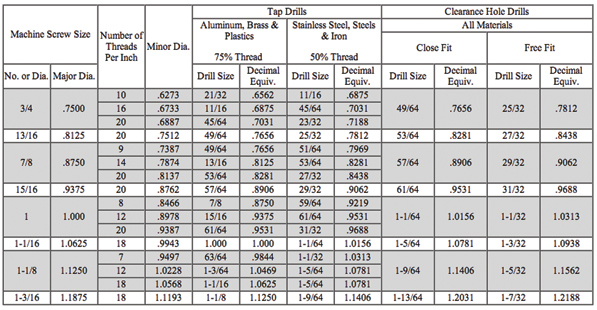 This popular series is returning to the magazine after a long hiatus, so we thought perhaps you could use a reminder of the topics that have been addressed so far.-Ed.

Editor’s note: If you have specific questions for author Bob Fritz, or if you have certain projects you’d like us to cover, email us at editorial@kitplanes.com with Home Machinist in the subject line. 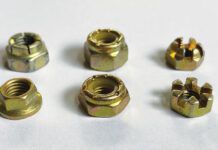 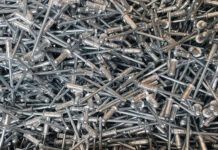 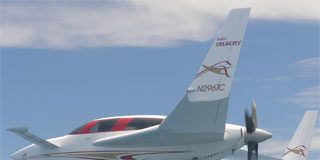