Home Newsline News Through the Smoke: Seeing the Unlimiteds

One story of Reno 2022 was the poor visibility caused by wildfires nearby. By Friday, changes to the schedule began to take hold and the second heat of the biplanes got postponed, so the Unlimiteds could fly.

Watching the Unlimiteds fly was my favorite part of the day, because we moved to Outer Pylon #2, so we could watch them up close and personal. What a rush having those big birds buzzing by so fast and rather than being on the outside of the course in the stands, you have them going around you! Makes for a great video and all around experience that few people get to experience! It was fun seeing all the media folks out in the sagebrush with their giant cameras taking pictures of them as they flew by.

The smoke returned in the afternoon, with heat races scrapped by 3 p.m. The disappointment of the stopping of the racing was palpable not only among the fans, but also the racers who had come so far and looked forward to racing. I feel their disappointment, but was happy to have seen the big Unlimited racers at close range. 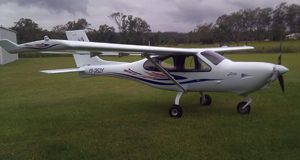 Dan Vance - July 16, 2021
0
As a new builder I came quickly to the step of needing to mark rib centerlines to align the ribs with the predrilled holes in the skin.