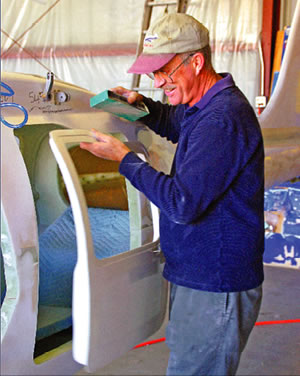 The author found that the door didn’t fit quite right. A heat gun and some sanding fixed it.

Last month everything went well. Perhaps two months in a row was too much to ask, though. No, let me moderate that: This month, some things went well, and some did not. As you may have seen from last time, the bits are on the panel and the panel is in place, so now comes installing the antennas and then (gasp!) turning on the power.

You really sharp-eyed types will notice a 4×6-inch hole over on the right side of the panel. That’s where those traditional circuit breakers were. They are now back in the parts bin, and a pair of circuit boards holding Polyfuses are behind the panel. (Go dig out the April 2009 issue of KITPLANES® for a complete description of the project.) I built a wood box, and a buddy, Mark, built a really nice little door for it. It looked good on the bench, but installed it was as out of place as a hula-doll on top of a B-2 bomber panel. A solution awaits, but not only is there no rush, that nice big hole is great for access—and I’ll need it!

Step one, other than to check for smoke after powering up, was to sit there making airplane noises as I entered all the set-points and calibrations for the Grand Rapids Technologies EFIS panel. It’s an intimidating job at first, but with a couple of hours of familiarization, it becomes apparent that the designers put together a logical sequence of menus. There’s no need for after-purchase DVDs to learn how to use it; in fact, the company laid it out the way I would have.

Understand, of course, that it’s not exactly intuitive. You’ll have to take your time to see the patterns and logic of it. But pushing the buttons will, in time, result in an Ah-ha! moment. It’s sort of like learning to ride a bicycle. Fear is mixed with intimidation, and then all of sudden you’re challenging the kid next door to a race around the block.

The other hurdles were not so easily cleared. I had installed the headset jacks at hip height next to the seats and done a continuity check. That was followed by running cables for the transponder and radio and installing the antennas.

It’s important that you not get ahead of yourself here. Push the transmit button or turn on the ELT without the antennas installed, and the power has nowhere to go; you can toast the device.

The antennas were selected for two reasons: First, as I’ve said, I like odd in some things, but with the possible exception of art, I like odd to have a purpose, a reason or at least a sense of élan. These antennas from Bob Archer (through Aircraft Spruce) have a purpose, reason and élan, so their odd appearance is great. Second, they are 100% internal, which keeps the fuselage clean.

Just one tiny problem poked its ugly visage upon me. Reception was terrible, and the PTT gave out a nice tone of C sharp at about 80 dB. Now here’s the really weird problem: That tone only occurs when I’m using my old Peltor headset. Use another same-vintage Peltor, or any other brand, and there’s no tone. That would indicate strongly that my Peltor is the problem. But when I use my Peltor in any other airplane, I get perfect operation. Like Alice said: “Curiouser and curiouser.”

After several hours of head scratching, I solved the problem by relegating that headset to the passenger seat. That didn’t solve the weak transmission/reception problems, though. I’m still working on those.

I called Bob Archer to ascertain that I’d installed the com antenna correctly. “Yep, the core wire goes to that little 2-inch tab, and the ground wire goes to that thing that looks like a big 3,” he said. Archer had made the cables, so I felt that they were not the problem. By the way, he has some interesting papers on the subject of antennas, though they don’t seem to be all in one place. Do a Google search on “Bob Archer, antenna tip” to find all six of them.

The transponder antenna is also a funny duck—nothing more than copper printing on both sides of a circuit board. I fabricated a pair of mounts out of the half-inch, high-density foam used on the doorframes, sandwiched the antenna board between them, and drilled through all three pieces for two bolts. That entire assembly was then hot-melt-glued to the inside of the aft fuselage floor, and the cable was plugged in. Simple and effective.

The last little bit of trickery was with the Zaon PCAS. This is a neat little box that sits on top of the panel and looks for transponders in other aircraft. It reads their output, grinds that data through its computer and out pops a reading of the closest three “threats.”

But wait! There’s more! Plug this into the Grand Rapids EFIS, and instead of a digital readout on the Zaon, you see a graphic display identical to the one that the controller is looking at when he tells you, “There’s traffic at your two o’clock, 6500 feet.” Neat stuff. 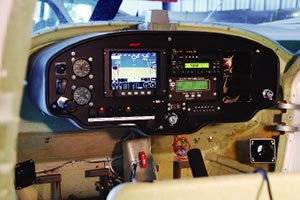 No smoke, just light… and the perfect environment for making airplane noises.

If the Door Fits…

It would appear that the curvature of the door doesn’t match that of the fuselage. That little tool I described back when I was doing the cowl would have been a pretty good solution to getting the edge of the door to fit the opening. Wish I’d thought of it back then. This job really wasn’t that tough, though. Just start by using a long sanding block to make straight lines of the door edges and then keep whittling until the door fits.

Getting the curve was a different kettle of fish. Once the door was on the hinges and the latches could hold it in place, I made some tabs and screwed them into the fuselage at several places. The tabs increased the curvature of the door to the point where they were flush with the fuselage. The next step was to go inside and apply the heat gun to the frame of the door. I’m bending the door here, not the fuselage. After about 30 minutes of heating it, I walked away and let it cool. Remove the tabs and there’s a nice fit.

Come on, Baby, Light My Fire

From what I’ve gathered, the Jabiru 3300 using an unmodified stock cowling has a tendency to run hot. While the Jabiru is billed as an air-cooled engine we know that a sustantial amount of heat is rejected through the oil. After some research, it seemed to me that the original Jabiru cowling was giving up useful cooling capacity with air leaks and poor attention to detail.

So I modified the cowling to, I hope, improve the situation. As such, I created a fiberglass tunnel in front of the oil cooler and then attached some rubber sheeting to the cowl to extend the tunnel as far forward as possible. The idea is not to slow the air down! Remember, fast air cools better than slow air. Instead, we create a relatively large quantity of high-pressure air in front of the radiator by preventing the air from spilling over and around the radiator. That it slows down is secondary to the primary goal. However, with a low-pressure zone behind the radiator, the air is accelerated through the fins and things stay cool. Any incoming air allowed to get around the cooler is wasted air, and unproductive aerodynamic drag.

As for the cylinder flow, Jabiru has what I think is a poor design for the inlets. The air flows in past a lip with a drop (intended to meet the cooling-air inlets in the cowling), then hits a flat plate in front of the cylinders. That’s designed to keep the first cylinder from hogging all the air, but it’s also a turbulence generator. (Yes, I know lots of certified aircraft have just such a setup; doesn’t make it good.) For ideal cooling, the goal is to build a large volume of high-pressure air on top of the cylinders, then accelerate it past the fins to a low-pressure zone below the fins. Imagine a jet engine with an intake shaped like this. Turbulent flow is not going to help build that high-pressure zone.

The response is to emulate that jet engine by ramping the inlets and smoothing the flow using foam and glass. I’m hopeful that the combination of the modifications will improve both cylinder-head and oil cooling. So far, it works in ground test. (This side project also allowed me to come up with a neat way of mounting the twin landing lights within the air inlets.) I’ll be watching how these cooling and cowling modifications work when we get to first flight. They all look good but we know that the only proof is in the performance.