By the spring of 1984 when the first issue of KITPLANES appeared on newsstands, Rotax engines were well established in the ultralight field, and were poised to change Experimentals in meaningful, lasting ways. Founded in Dresden, Germany, in 1920, Rotax (standing for rotary axle) moved to Austria in 1943. Bombardier of Canada acquired Rotax in 1970 and sold it to a new company, Bombardier Recreational Products Inc. (BRP), in 2003. Of the tens of thousands of Rotax engines produced annually by 1200 employees in Gunskirchen, Austria, aviation engine production is tiny but highly valued by the company and, apparently, by its customers.

A Paradise P-1 displays its Rotax 912ULS engine at the Sebring, Florida, LSA Expo. Without the 912-or, for that matter, Rotaxs aggressive development of aero engines-where would Light Sport be today?

At the request of Canadian engine distributor Ron Shettler and others in the 1970s, Rotax adapted some of its two-stroke snowmobile and personal watercraft powerplants specifically for small aircraft. Its competition in the ultralight field included imported Yamaha, Kawasaki, Hirth and American Cununa and (for the Weedhopper) Chotia two-stroke engines. Even before Rotaxs intentional foray into aviation, its single-cylinder 9-horsepower R-185s were being supplied with the twin-engine Canadian Lazair ultralight kits beginning in late 1981, replacing the original 5.5-hp Pioneer chainsaw engines. The R-185 was designed as an industrial unit that powered portable water pumps used to fight forest fires.

The smallest factory-approved Rotax aero engine, the air-cooled 28-hp 277, was already in wide use when I ordered and built a Sorrell Hiperlight powered by this engine in 1984. (Incidentally, while Rotax used the R- prefix for its engines, popularly they are known mainly by their numbers.) A second-source belt-driven speed-reduction unit slowed the turns to appropriate propeller revs. Later, the 277 and larger two-cylinder, two-stroke Rotaxes were offered with Rotax gearboxes, initially with reduction ratios of 2.24:1 and 2.58:1. 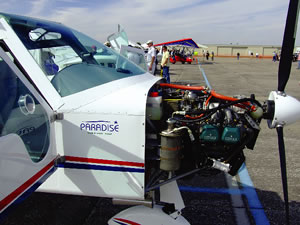 The 377-the first Rotax two-cylinder aero engine-was replaced by the 40-hp, fan-cooled, single-carburetor, single-ignition, 59-pound 447-still available through dealers, though production has ceased. (Rotax policy is to support discontinued engines for at least 10 years after production ends.)

Next came the 503, initially with single-point ignition and later with electronic ignition. The single-carburetor version puts out 45.6 hp, and with two carbs it produces 49.6 hp. The 503 basic engine weighs 69 pounds. Add 2 pounds for each carburetor, 10 pounds for the B gearbox, 11 pounds for the exhaust and 8 pounds for an electric starter. Independent studies concluded that the 503 is the most reliable two-stroke aircraft engine ever made. Rotax claims the 447/503 line is the most popular ultralight engine with more than 40,000 sold-and for very good reasons, which include reliability, durability, price and factory support.

Rotax followed with its 532, a single-ignition unit modified from a snowmobile design. Some who used the 532 in faster aircraft found mid-range torque to be lacking. Rotax solved this objection by replacing it with the top-of-the-line two-stroke, the 65-hp 582. Featuring dual no-points ignition, it also includes liquid cooling and automatic oil injection. Most buyers opt for electric start. With the lightest of three available gearboxes, the 582 weighs 97 pounds including dual carbs, electric start and an exhaust system.

Recommended time between overhauls (TBO) is 300 hours for the 503 and 582 engines. Compared with four-stroke engines, that sounds short, but two-stroke overhauls are relatively simple and inexpensive.

Noting their worldwide success with light and durable powerplants for the ultralight and microlight markets, Rotax managers began development of an entirely new product in 1984: a small, exceptionally light, four-stroke aircraft engine that would be known as the Rotax 912A.

A year or so later, at the EAA convention in Oshkosh (now AirVenture), I was among the journalists who were asked the following question by Rotax representatives: How much do you think a light four-stroke Rotax producing about 80 hp could sell for? As I recall, my answer was about $8000. By 1989, the 912A was appearing at dealers displays. The first price was more than my guess, but the engine sold well from the start.

The 912A was type-certified in Europe in 1989. Certificates for the 115-hp, turbocharged 914 and the 100-hp 912S were issued in 1996 and 1998, respectively. All three engines are available type-certified (as required under JAR and FAA type certificates) and uncertified (as allowed in microlights and American Light Sport Aircraft). The two versions are nearly identical, but more extensive testing and complete parts tracking raises the price of the certified versions considerably.

The 912 was the right product at a good time, but its success has built gradually to the point that it is the dominant engine among todays Light Sport Aircraft. Nearly all factory-built Light Sport airplanes (SLSAs) from Europe and South America are powered by an 912ULS, and so far European LSA imports predominate in the market.

Its worth noting that Vans Aircraft, with a reputation for preferring conservative design and proven technologies-probably the reason its the company with the most kit aircraft flying-will supply a 912ULS with its RV-12 Light Sport (ELSA) kit. In the next year or so, RV-12 builders (myself included) could well put more than 1000 new Rotax 912ULS engines in the air, a fitting continuation of an enduring brand.

November 1988
Its announced in Twice Around the Patch that the new four-cylinder, four-stroke Rotax 912 engine was unveiled at Europes Cranfield airshow. The 79-hp engine is the first from Rotax to be designed specifically for aircraft (as opposed to being adapted from snowmobile or motorcycle engines).

A new version of the Kitfox, with an expanded cabin area and a lengthened tailcone, allows builders the option to use a VW engine or the current Rotax powerplants being offered.

Mike Maxwell, of Petaluma, California, and his Lancair 235 make good at the CAFE 400 event, placing sixth overall and fourth in the Experimental two-place category. He attributed his success to the numerous improvements he had made to the design. Keith Connes covers the fuel-efficiency-focused event in more detail in a feature article.

Among the new products is an announcement from Accu-Weather that it has begun offering color weather pictures. Says the report, Accu-Weather has developed a menu that allows personal computer users to access satellite, radar and weather graphic pictures which are transmitted from the company’s system to an IBM PC, Macintosh II or Commodore Amiga personal computer. The cost for the software that allows this: $195 to $1000 depending on the PC model. Each transmission cost $2 per image.

December 1988
The first Swearingen SX-300 kit is now flying. The aircraft was first shown as a design concept in mid-1983 and as a flying prototype in 1984. It was originally envisioned as a composite construction kit, and then changed to metal, grew in horsepower and shrunk to achieve higher performance. Builder Dan Wright said the kit was much more complicated to build than the manufacturer had indicated.

The Directory of Kit Aircraft occupies 30 pages of this issue-straight text without any photos.

January 1989
A reader makes a request in the Letters column. Writes Stephen R. Marsha: I would like to see every review of a kit plane include the number of kits shipped, the number flying today, the cost of the kit as sold, the cost of the kit as completed and the time to build (reported by a builder, not the factory). This was in response to an earlier editorial by Molt Taylor that claimed, We’ve seen one too many kits offered for sale when what was really being offered was the chance to help build a prototype at the customers cost and expense. Roger that.

Don Dwiggins delves into the history of man trying (and failing) to fly with flapping wings. DaVinci had a design whose wings beat in opposing directions, and a model of the concept actually was realized and flew in the 1930s (it now resides at the EAA Museum in Oshkosh).

Among the new products is a computerized service from CompuServe and EMI Aerocorp that allows pilots to file flight plans directly into the FAAs system. The CompuServe software kit cost $39.95, registering an aircraft cost $25, and EMI flight plans were $2.50 to $6 each, depending on length. Filing the flight plan cost another $1, and CompuServe connect time was about 21 cents per minute.

In Part 2 of a series on glass cockpits, a sidebar details how to write your own moving-map computer program. Your IBM-compatible computer needed an enhanced graphics adapter (EGA) card and monitor, and you also needed Microsofts QuickBASIC 4.0. The basis for the map was a pixel grid with X and Y axes.

February 1989
In response to the profile of the red Lancair 320 in a recent issue, two articles address the need to minimize the temperature of composite aircraft (dark colors cause more solar heating than white or light colors, and more heat means less strength). Consultant to Neico Aviation Martin Hollman advises against following the 320s red color scheme.

The Carbon Dragon, a high-tech, foot-launchable sailplane, is profiled. It had a glide ratio of 25:1 and a minimum sink rate of 100 feet per minute. Designer Jim Maupin flew the design in Tehachapi, California.

A design called the Air Shark I is advertised as an easy-to-build, 200-mph cruise, 2000-mile range, four-place amphibian. It was offered by Freedom Master Corporation in Satellite Beach, Florida.

In New Products, Narco debuts a handheld nav/com, microprocessor controlled, with 760 com channels and 200 nav channels, powered by a NiCd battery. The HT 870 weighed 1.7 pounds, and sold for $549.