When Zenith Aircraft decided to enlarge the venerable CH 701 into the bigger CH 750, in order to maximize the potential of the Light Sport airplane standards, it was already thinking of an even-bigger version. After all, Zenith already had plenty of experience with the CH 801 four-seat airplane. The resulting STOL CH 750 Super Duty can utilize larger engines like four-cylinder Lycoming-style powerplants and it has plenty of space and lifting capability for a third seat in the back. It’s no wonder that it has become a fast seller in the company’s kit lineup.

One of the earliest CH 750 SD adopters was Randy Shannon of Drexel, Missouri, who wanted an airplane that could easily be flown from his backyard airstrip and be used to commute to cattle ranching operations he operates in east-central Kansas. A visit to the Zenith kit factory across the state in Mexico, Missouri, convinced him that a CH 750 SD would fill the bill admirably. He didn’t wait long to order his CH 750 SD kit, and he had it flying in about 12 months, after picking up the big box of parts and pieces on the first day of September 2019.

The first Zenith STOL CH 750 SD kit was actually completed by Viking Aircraft Engines, which forged ahead to finish their company demonstrator well before Shannon’s airplane flew, but he and his crew take satisfaction in being the initial customer-built completion. The kit went together fairly well, he reports, by taking advantage of his large hangar at the nearby Linn County, Kansas, airport; his home at Drexel, Missouri, is almost exactly on the Mo-Kan state line, with parts of the town spread out over three different counties in two states. Building the kit entirely at the airport allowed construction to proceed without moving components around. While Shannon is the primary builder, he gives team-effort credit to his A&P friends Ted Van Meter and Dan Eaves, co-builders, who kept him out of trouble with his first Experimental-category building project.

Making It His Own

The beauty of E/A-B aviation is the ability to customize certain details, and Shannon took advantage of this freedom to make his trailblazing SD his own. He didn’t care for the central control yoke that’s standard on the Zenith 700 Series even though it frees up entry and exit room, so he switched to the optional dual-stick setup. A traditionalist by nature, he also installed a conventional steam-gauge instrument panel, with the addition of a lift reserve angle-of-attack indicator, rather than the tablet-based “Unpanel” used in the prototype STOL CH 750 SD.

Early on, it was decided to go with a big-engine option, utilizing the Titan IOX-370 from Continental that can produce a fire-breathing 195 horsepower, turning a composite two-blade Sensenich ground-adjustable propeller. The combination contributes to the ability of the finished product to almost hover under full power.

Gaining access to the back of the instrument panel is always a headache in any project, but creativity in Experimental aircraft construction can relieve some of this pain. To make it easier to reach this area, Shannon’s STOL CH 750 SD incorporates a swing-up windshield, released by pulling the two piano-hinge rods along each side of the windscreen to let the assembly rotate around the top retaining hinge. With it propped up out of the way, one can then unscrew any of the five access panels in the glareshield panel cover and remove or install instruments and radios while standing comfortably, rather than working while inverted under the dash.

Most of the remainder followed the kit’s assembly process precisely. As with any early serial number, there were a few glitches to be straightened out, but customer support is a Zenith hallmark and answers were provided expediently. The faux-military paint scheme stems from Shannon’s U.S. Army service as a forward observer in an artillery unit during the Gulf War (he is LTC Shannon, Ret.), hence the desert tan coloration and military-style callouts seen in various locations around the airframe. The interior, on the other hand, is anything but G.I. issue, with plush seats and four-point safety harnesses. The dual sticks notwithstanding, there are no brakes installed on the copilot rudder pedals and the only throttle is on the left side of the panel. The final avionics installation was still being planned at the time of our visit; a handheld com radio is sufficient for Shannon’s purposes for now.

Like all the Zenith airplanes, CH 750 SD construction uses mostly 6061-T6 aluminum components, joined by aircraft-grade pulled rivets. Advances in kit design and parts fabrication now spare builders many of the arduous forming and drilling tasks of earlier years, even though Zenith Aircraft still offers plans for scratch building most of its planes and will sell parts as needed to assist in that effort.

Given the backcountry utility of the STOL CH 750 SD, the landing gear is rugged and massive. A huge one-piece slab of 7076 aluminum spring holds the main gear to the fuselage and a big 6.00×6 nosewheel is up front. Shannon is a Bushwheels fan, so his 26-inch main tires are fat 8.275×10-8 doughnuts that will ride over ruts and rocks unscathed. The nose gear now uses a stack of elastic discs for shock absorption, rather than the bungee-cord system in the earlier Zeniths.

The fuel supply is contained in a pair of 24-gallon wing tanks fed through a Left/Both/Right valve on the center console. With the fuel injected engine, an electric auxiliary fuel pump is needed to augment gravity flow for starting and to back up the engine-driven pump. Shannon figures on 9.3 gph fuel consumption at 2400-rpm cruise.

The finished empty weight of N889RS came in at 1157 pounds, so given the 1900-pound gross weight, some 458 pounds will be available for cabin payload with the tanks topped off. With three 170-pound FAA-fantasy standard occupants aboard, about 34 gallons of gas can be carried.

As if the effective elevator and reverse-camber horizontal stab weren’t enough, a row of optional vortex generators are added to the underside of the elevators, enabling a 15% reduction in the landing approach speed. The STOL CH 750 SD is a purpose-built aircraft; it looks the way it does because its function is to get in and out of tight spaces at extremely slow speed. Accordingly, the upward-raked aft fuselage can keep the tail skid clear of the ground during nose-high liftoff and touchdown attitudes, the fixed slats across the wing leading edge create a slot effect to energize airflow at high angles of attack, and full-span flaperons squeeze out every ounce of lift. It’s a beautiful thing in action.

We couldn’t wait to take N889RS rolling along Shannon’s home turf and see how his creation flies. The big swing-up doors are lowered and latched, and starting requires only boosting up fuel pressure, flipping on master and mag switches and hitting the starter. The big tires rolled across the cropped grass effortlessly, responding to nose gear steering and brake pressures as expected. The run-up checklist was used religiously, even after 40 hours of Phase 1 testing, but we found that it held no surprises. Trim and flap settings are adjusted via rocker switches and indicators on the console; the flaperons are lowered halfway for most takeoffs, although we tried one without them and found that it only required about five mph more liftoff speed to achieve the same solid control feel.

Taking off is an exhilarating “open up and hang on” experience. About as soon as the throttle is opened, the stick is pulled back and the wing goes to work, lifting off with the nose pointed at the sky. The specs define takeoff distance as 115 feet; it actually depends more on technique and the wind conditions of the day. The most we consumed with lackadaisical power application and control use was about 500 feet.

Climb rate with our two-up, full-fuel configuration showed around 1100 fpm, but it was the angle that was attention-getting. Holding 65 mph put the nose well above the horizon and any obstacles ahead quickly disappeared as we scampered skyward. Once out of the clutches of low-level obstructions, accelerating to 70 mph and retracting the flaperons improved visibility.

And the visibility through the side windows that extend to hip level is outstanding, to be sure. Leveling into cruise at 3000 feet msl, there was no need to reference an attitude indicator, with the whole world outside to provide visual cues. Cranking around into Lazy 8s and steep turns proved the controls to be responsive and reasonably balanced in the forces required. The rudder exhibited some dead-band effect when the pedal was first applied, but one soon learns to lead turns with an initial bit of rudder pressure to compensate.

At 2500 cruising rpm, about 95 mph IAS was seen in level flight. Once the flaperons are in the full-up position there’s little that additional horsepower can do to overcome the sizable airframe’s parasite drag. Going somewhere fast is not what the STOL CH 750 SD is all about. The only inconvenience we could find with the cockpit setup is the need to switch hands to use the flap and trim rockers. It would more convenient to have them near the throttle.

Specifications and pricing provided by the manufacturer.

When we cut back the power to slow below the 70-mph flap limit speed, we lowered the flaperons to their 15° maximum and put the airplane’s buoyancy to work. The lift reserve indicator began to light up and the airspeed indications became ridiculously minimal. Stall speed is listed as 34 mph, but the IAS reads off the scale at 20 mph or so while hovering along under power with your heels above the horizon. The elevators are still willing to raise the nose far into the sky until a sagging stall break is encountered, at which point releasing back pressure puts one back into hover mode.

Returning to the field for some pattern work, it became evident that exploiting the CH 750 SD’s capabilities requires practice and perhaps a little instruction from experienced STOL pilots. The spec table’s landing roll figure of 150 feet is doable, in our opinion, but that doesn’t count the distance required to drop in over obstacles and maintain effective control through a comfortable flareout and holding-off phase. Still, 500 feet of runway space is plenty.

What we found during our STOL CH 750 SD arrivals was a need to carry energy into the landing, either with throttle application or with extra airspeed, because one encounters considerable drag rise when generating lift to stop the descent and slow to touchdown. Once that’s learned, you can put the STOL CH 750 SD onto a chosen spot at will. We were most comfortable carrying 65 mph down final with power at idle until landing was assured, at which point the airplane decelerated quickly as the nose was rotated up for touchdown. Alternatively, it’s possible to approach as slowly as 50 mph, using some throttle to maintain enough energy to flare out and land.

All in all, the Zenith STOL CH 750 SD is about as nimble a backcountry performer as one could wish for. Randy Shannon now has a highly capable STOL tool at his command, and it can carry enough load to supply about any needs for a trip into the bush. His airplane looks perfect for the job it does, and that’s what really counts. 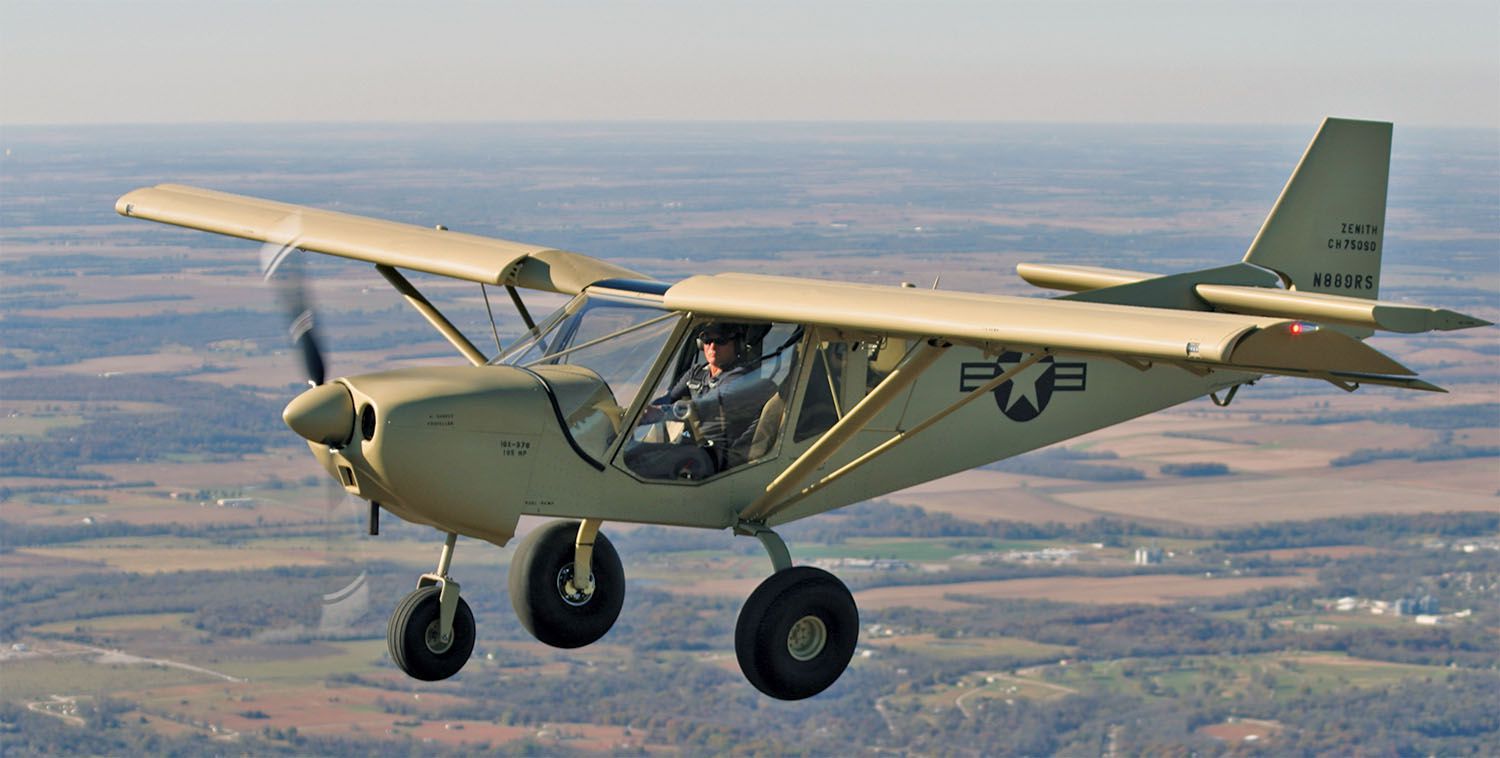 Kerry Fores - October 5, 2021
0
“Grandpa Kerry, where do unwanted airplane projects come from?” I choked on my ice cream....

Paul Dye - November 16, 2012
0
You've planned; you've prepared. Now we look at how to conduct your first flight in a homebuilt aircraft.