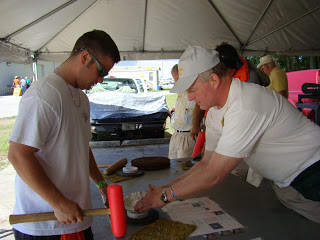 On my way to the Zenith 701 sheet metal project, I was waylaid by the constant and very loud sound of sheet metal getting the heck pounded out of it. One of the instructors, Jake Hunsinger of Mansfield, Ohio, invited me in to join the fun.

Using the Tuck Puck method, developed by Carey Culpepper last April, the participants set a flat, round piece of sheet metal on a concave puck base, machined from UHMW plastic. (It’s available for $30 from TuckPuck.com, as is the $26 instructional DVD.) Also, the TuckPuck can be used to stretch the metal instead of a shotbag. This method is also described on the MetalMeet website.

Hunsinger was introduced to metal shaping in October of 2006, and quickly got involved in the online MetalMeet.com community. While metalshapers work on other applications such 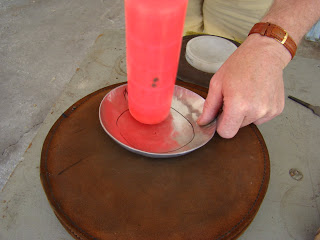 as classic cars, aircraft components such as wheel pants and scoops can be shaped as well.

The rudimentary shaping that I did started with deburring a round piece of sheet metal (away from the flat file’s tang, thank you very much). Once my chances of slicing my hand open with the sharp edges were eliminated, we centered the metal over the puck, and with a long, rounded plastic mallet, I pounded away around the interior circle, drawn on with a Sharpie. A few good whacks resulted in a “tuck” or a 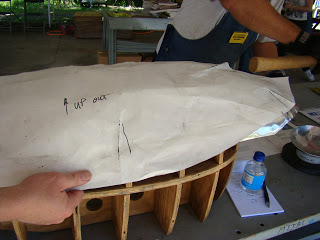 “flute” at the outside edge of the metal, which was then stretched and flattened with the long plastic mallet with a rounded end. Round and round I went, until I had a rough bowl-shaped piece of metal where a disc once was.

The real use of the skills became apparent when Hunsinger showed me the wood form for a pair of wheel pants that would be shaped at the workshop. A paper pattern for that part was laid over the wood form, with orienting arrows and reminders to ensure the piece is shaped properly.

Because my bowl was pretty lumpy and uneven, it was time to smooth it out in the English wheel, this one featuring a rounded lower wheel. I was impressed with the emphasis on personal safety during this workshop experience. Not being of large stature, I received quite a bit of advice on which mallet would be easiest for me to handle. There were also a lot of careful eyes on 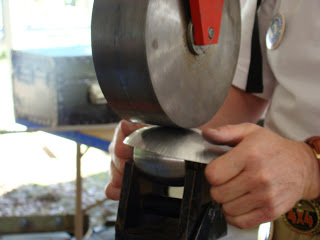 my work on the English wheel, most of it advice on how not to smash my thumbs between the upper and lower wheels.

This was just a quick taste of metal-shaping, and I expect to have a more in-depth experience at AirVenture 2008. Besides, I need another bowl for the matched set. 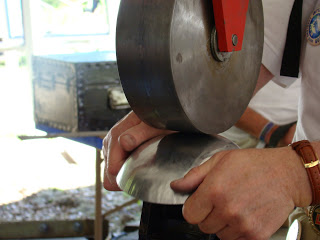